The last year has been brutal on small business in San Francisco, and like scores of American cities, ours has faced an unimaginable number of retail closings. In a city largely defined by its local businesses, the toll has been particularly high, and many of our beloved institutions will sadly never return.

That being said, I’m especially pleased to welcome back San Francisco’s premier vintage poster dealers: our friends at Real Old Paper Gallery. Regular readers of the blog are already familiar with Real Old Paper and its owner Andrew England, who has been profiled in these pages several times in the past.

England’s first, Real Old Paper Gallery opened in November of 2016 on Columbus just off of Mason, right across from Di Maggio Playground in the light-filled space that used to house Conor Fennessy’s eponymous boutique. With its rotating collection of colorful antique posters, the gallery flourished, and the business was in its fourth year when the pandemic began. But when the tourists dried up, so did England’s foot traffic–and after months of deliberating, he decided to close in September of last year. 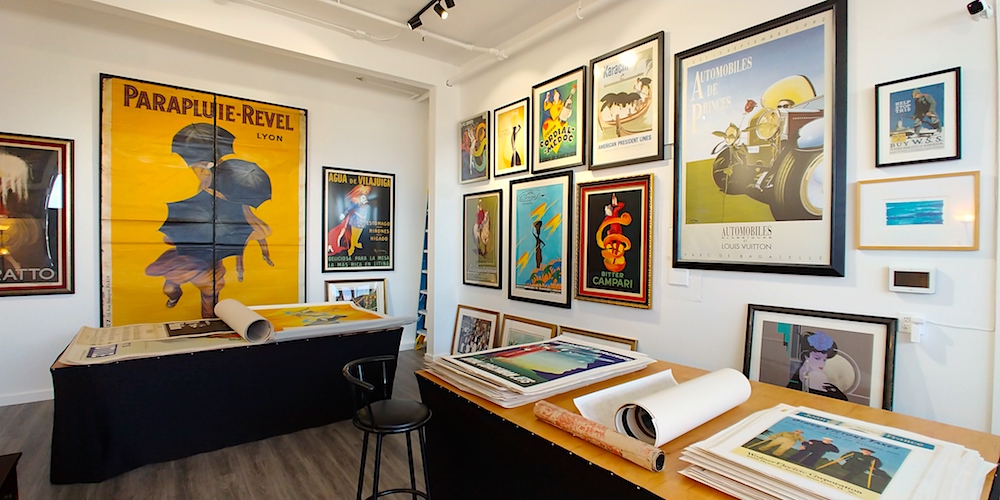 The new Real Old Paper Gallery, on their first day of business in the Wharf. | Photo: Joe Bonadio

England was determined to reopen when the time was right, and he kept his eyes peeled for a new space. After nearly six months of closure, this week his patience finally pays off: Real Old Paper Gallery  is now open at its brand-new boutique at 777 Beach Street.

Always the gentleman, England was kind enough to take a few minutes away from his busy preparations to bring me up to date.  As I walk up to the new gallery for our meeting, I take in the spectacular vista, looking across Aquatic Park to the waterfront. The Golden Gate Bridge limns the view to the northwest, and Alcatraz Island rests serenely in the center of the bay. 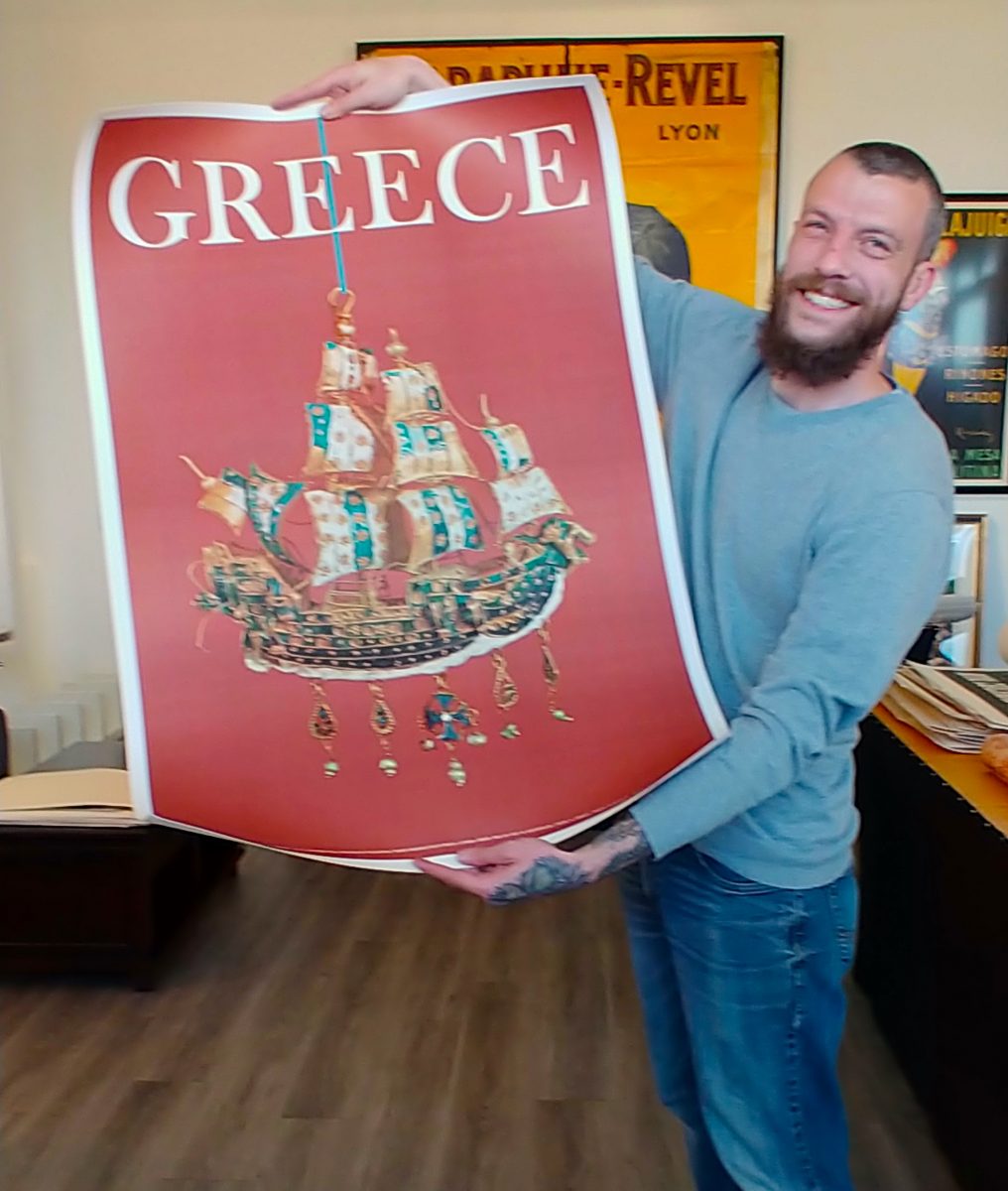 England’s view from the front windows of his former gallery was impressive: across the cable car tracks to Coit Tower and the spires of Saints Peter and Paul Church. Pretty hard to top–but England has definitely done it.

Lightly edited for clarity, our conversation is below.

Andrew England: I’ve got some big news! I’m reopening the gallery. As you can see, I moved it a little down the road to Beach Street, in between the Cannery and Ghirardelli Square. Just across from Aquatic Park, and looking right at Alcatraz and the Golden Gate Bridge.

AE: I’m going to suffer through it, though. 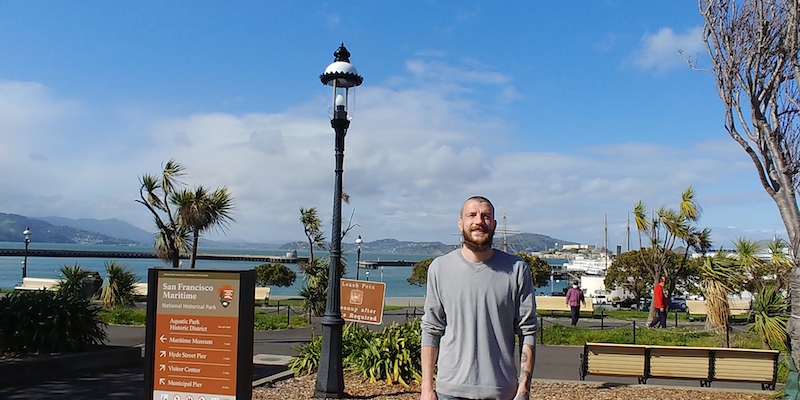 JB: In all seriousness, these are pretty fancy digs. And on Beach Street, you’re right in the middle of a gallery row of sorts.

AE: Yes, there are a couple of galleries close by that are well established. I’m also inhabiting a space that was a large gallery, the Franklin Bowles Gallery, for at least a couple of decades. I’ve taken one of their old units.

So there is some good art around, and we’re also right next to the Cartoon Museum and the Maritime Museum.

JB: You’re directly next to the Cartoon Museum, yes?

AE: Yes, they’re right next door. We’re also on the same block as the Buena Vista Cafe´ and Hyde Street Pier, and a number of other favorite spots.

JB: Aside from the change in scenery, you’re going to see a different crowd here. What are you expecting?

AE: Well, when people come to San Francisco, the Wharf is usually an area they want to visit. This is a much busier channel for tourist foot traffic. So I’m looking forward to seeing a lot of visitors once people feel comfortable traveling again.

Of course, I’ll miss being a part of the neighborhood where the old spot was in North Beach. But I’m a ten minute walk away, so hopefully I’ll get some of my locals over here. Most of my business has always been tourism though, so I’m excited about being in front of the masses that come to a place like Fisherman’s Wharf. 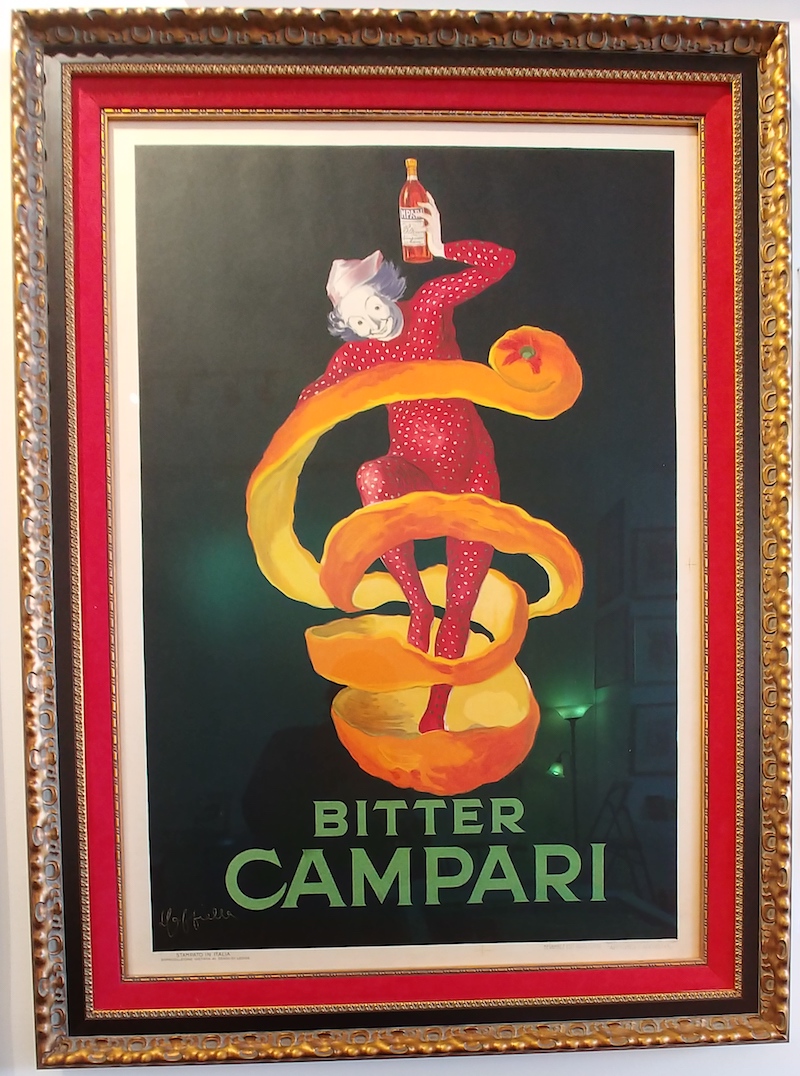 A classic Campari poster by Leonetto Cappiello, just one of the many vintage pieces on offer at Real Old Paper Gallery. | Photo: Joe Bonadio

JB: Meanwhile, once again you’ll be walking right through North Beach on your commute every day.

AE: Yep. I’ll have the exact same walk down Columbus–just a little longer.

JB: The neighborhood will be happy to have you back around. With things coming back slowly but surely, what do you expect your hours to be?

AE: I’m going to gear it more toward the daytime crowd. North Beach is so focused on restaurants and bars, that it was good for me to be open later. But with Aquatic Park and the Wharf, until things are fully back in swing as far as restaurants go, I think the daytime is going to be much busier.

Initially I’m going to be open 11:00 to 5:00, Tuesday through Saturday. It’s a smaller space, and I’ve condensed the inventory into stacks that are easier to access. So it will be pretty seamless, and looking through things will be easy.

And I’ve got a lot of wall space, with very tall ceilings. So there will be plenty of stuff on the walls for the casual browser.

JB: Speaking of that, what was it like to attack a completely empty gallery, a blank white space?

AE: Well, it wasn’t completely blank! We had to do some demolition work, because this was basically a storage unit for 20 years. So to make it blank was a task.

But it’s fun, because it’s one of the few times you get to start entirely from scratch. The space has nice tall glass in the front, brand new floors and plenty of daylight coming in. It’s going to be great.