In the Fall of 2016, Andy England opened his Real Old Paper Gallery in the sun-filled space at 801 Columbus Avenue, smack dab on the Powell/Mason cablecar line in North Beach. It was his first brick and mortar business, and England brought with him a collection of vintage posters that had taken him nearly fifteen years to assemble. England’s carefully chosen works happened to look spectacular on the walls of his bright new space, and naturally it wasn’t long before people took notice.

Today England is celebrating his third anniversary at Real Old Paper, and his collection is bigger and more wide-ranging than ever. The gallery is a jewel on this quiet block of Columbus, changing constantly as new posters come in—and they’ve got a very cool exhibit coming up to coincide with Fleet Week. I had a chance to speak with England about it earlier this week, and our conversation is below.

JB: The gallery is looking great.

AE: Thank you, sir. This is probably the most inventory I’ve had since I opened. And I’ve been very particular about what I’ve acquired; these are some of the best pieces I’ve ever had.

JB: I understand you’ve got something interesting coming up for Fleet Week. 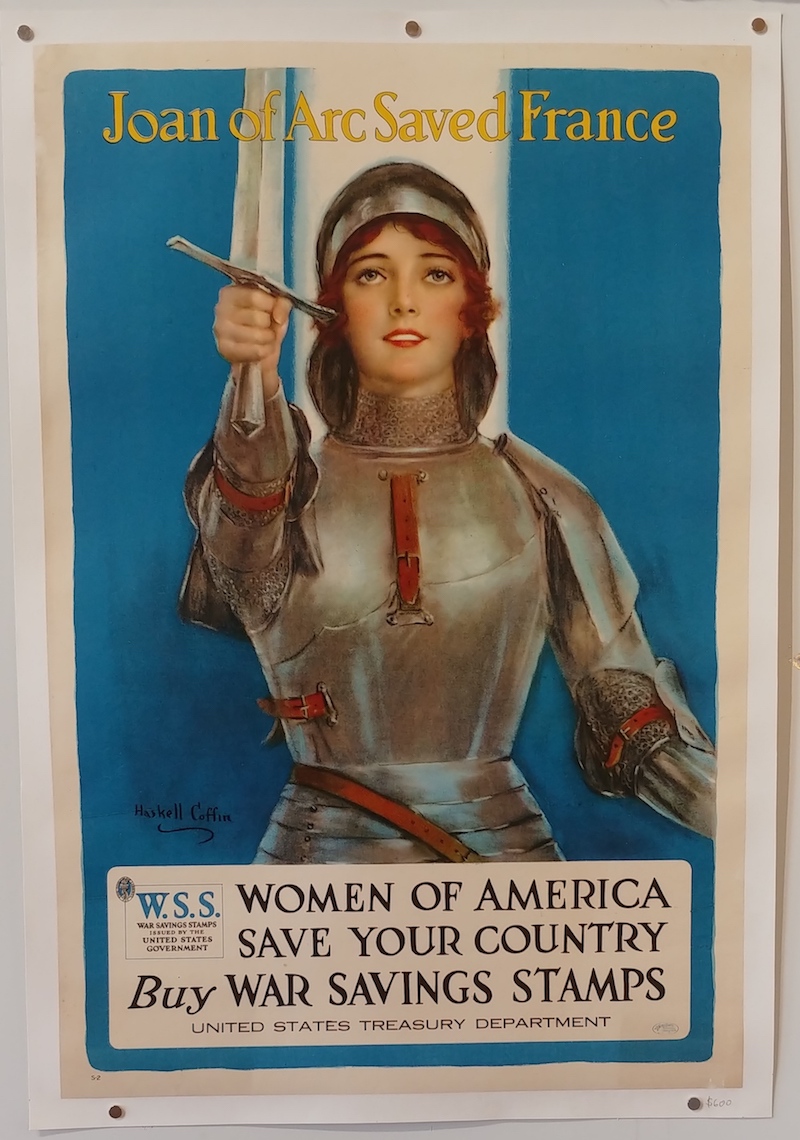 Joan of Arc implores the women of America to buy stamps for the war effort. | Photo: Joe Bonadio

AE: That’s right! On our main wall, we’ll be hanging solely war propaganda. We’re dedicating sixty feet of wall to the exhibit, to coincide with the different branches of the military visiting North Beach.

Everything goes up today—and it’ll be up throughout Fleet Week.

JB: Have you done a themed exhibit like this before?

AE: No, not outside of private events.

That’s the government reminding you that if you aren’t carpooling….you may be a Nazi. Click to Tweet

JB: So tell me a little about the works that will be on display.

AE: Well, they’re all American, and from either World War One or Two. Some are what you’d expect: there are a lot of posters looking for money for the war effort—Liberty Loans, War Bonds, things like that. Ways for the public to contribute.

There are also public messages, like conservation posters for gasoline and other things. Of course there are recruiting posters, for all branches: Marines, Air Force, Navy, Army, the National Guard. I even have the Air Service, which actually predated the Air Force. 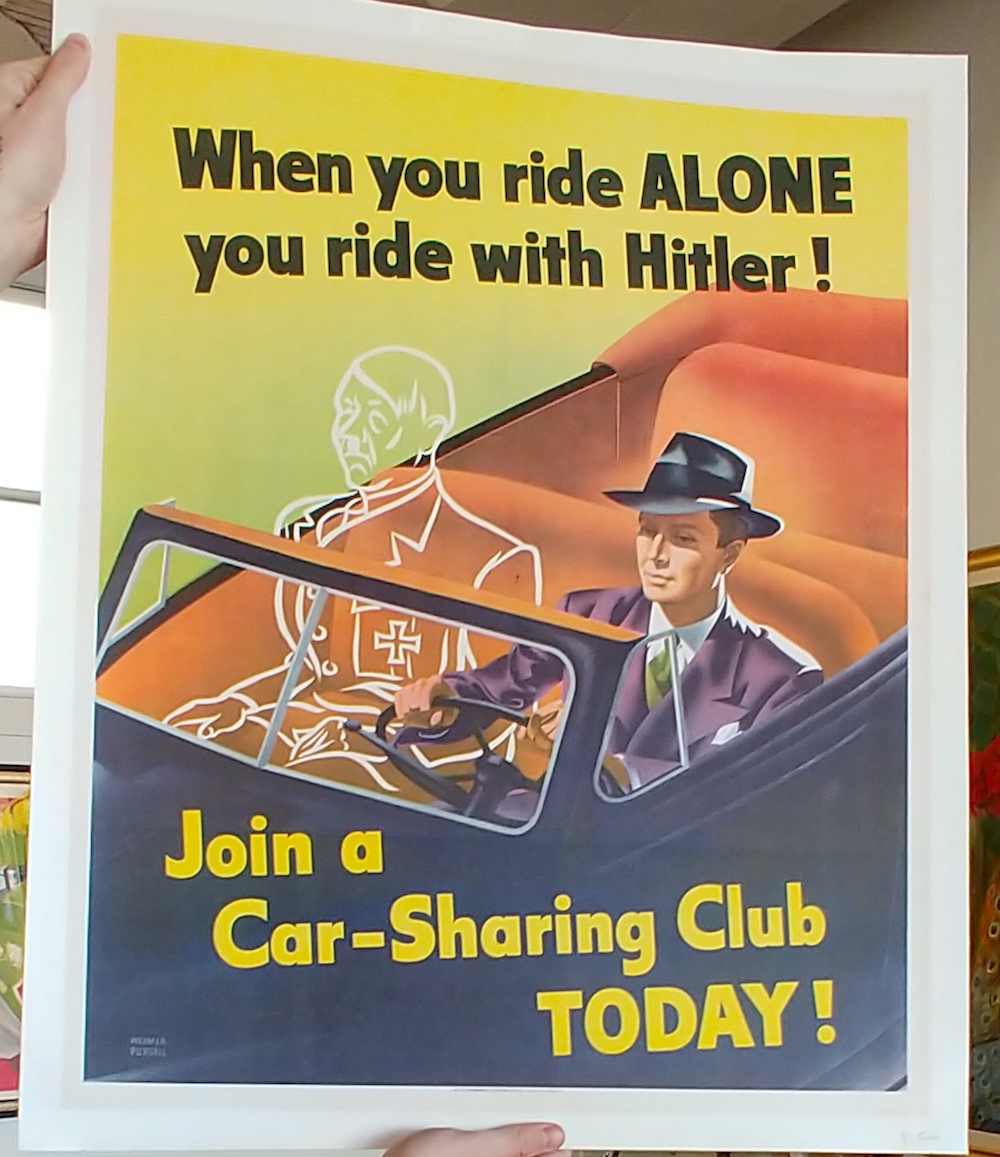 With the subtlety of a sledgehammer, the military conserves gas for the war effort. | Photo: Joe Bonadio

JB: One of these jumped right out at me: ‘When You Ride Alone, You Ride With Hitler.’

AE: Yeah! That’s a gasoline conservation poster, for car sharing. That’s an example of a public message: the government reminding you that if you aren’t carpooling….you may be a Nazi.

JB: Yeah, you don’t see copy like that anymore.

AE: No—truly unique to it’s time. From 1943, I believe. And to my knowledge, outside of what might be in a private collection, there aren’t any more of these for sale. I know there’s actually one that’s on exhibit at the Smithsonian. It’s a coveted piece, and I’m excited to have one. 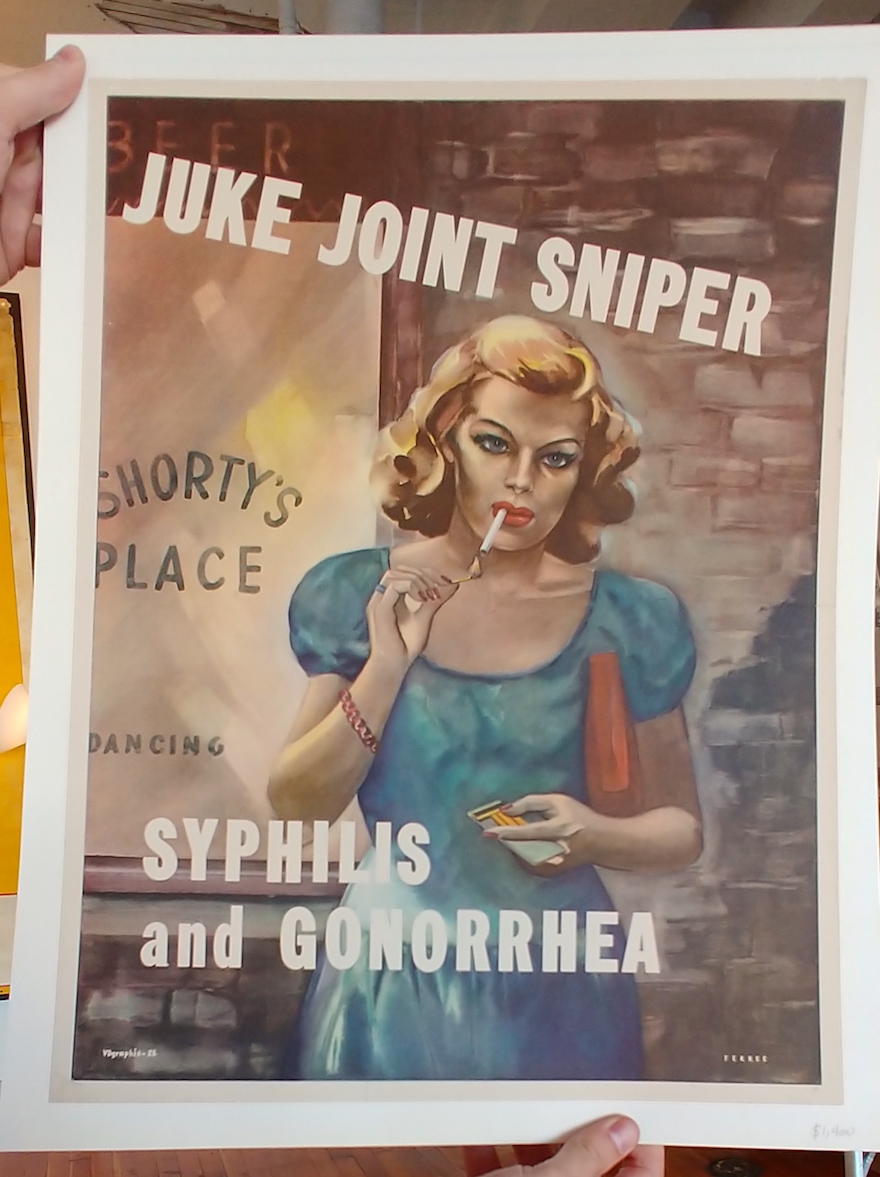 JB: You’ve mentioned that your interest in war propaganda goes back a long way.

AE: Yes. They were some of the very first pieces that I bought. What spurred my interest in collecting paper ephemera was war propaganda—that, and films. But particularly propaganda, because the imagery and the message of each poster is such a clear statement about that point in history.

I always tell people that poster art is a really cool combination of art and history. And with war propaganda, the history is right on the surface, and in your face. Ride Alone, Ride With Hitler!

JB: So how many pieces are going up?

AE: By my count, at least forty American pieces. It’s definitely more than you would expect to see, even in a museum exhibit. 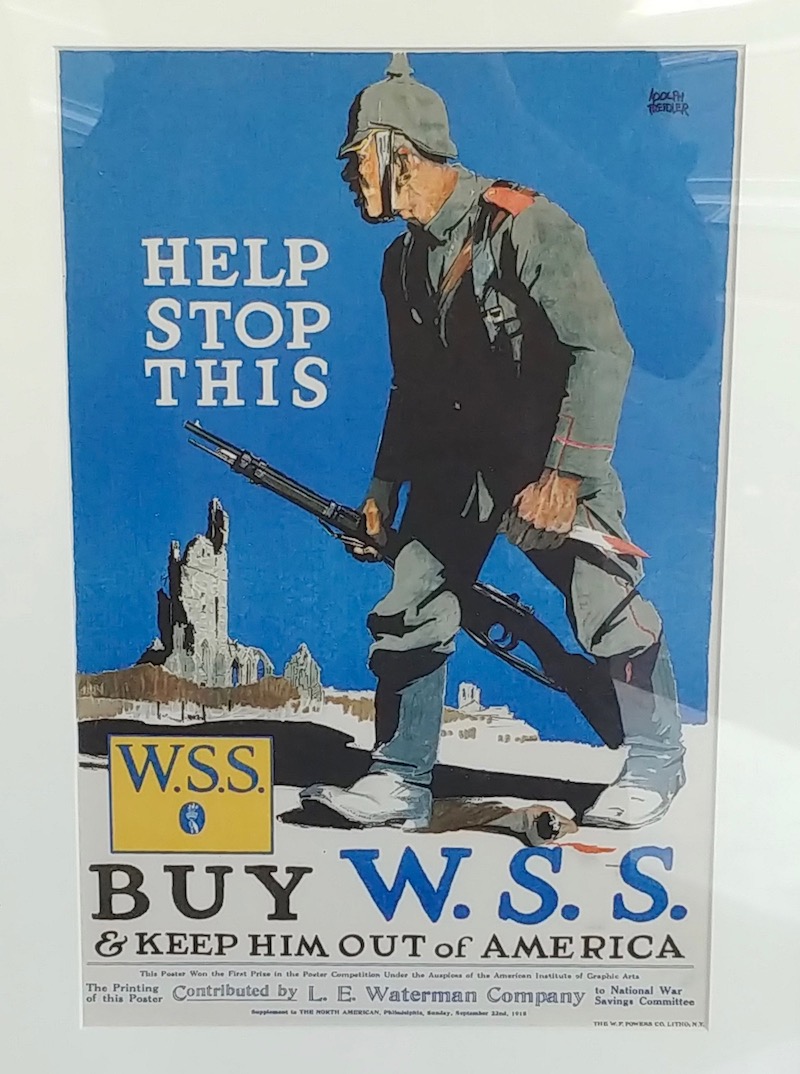 JB: So this is the kind of exhibit that you might see at the Met, or another big museum?

AE: Oh, I think you’d be very happy to see something like this at a museum, because I have so many unique pieces that you can’t really find on the market.

JB: Would you say this the best exhibit of its kind out there now?

AE: I would comfortably say yes—certainly on the West Coast.

JB: So when did you first start getting into war propaganda? 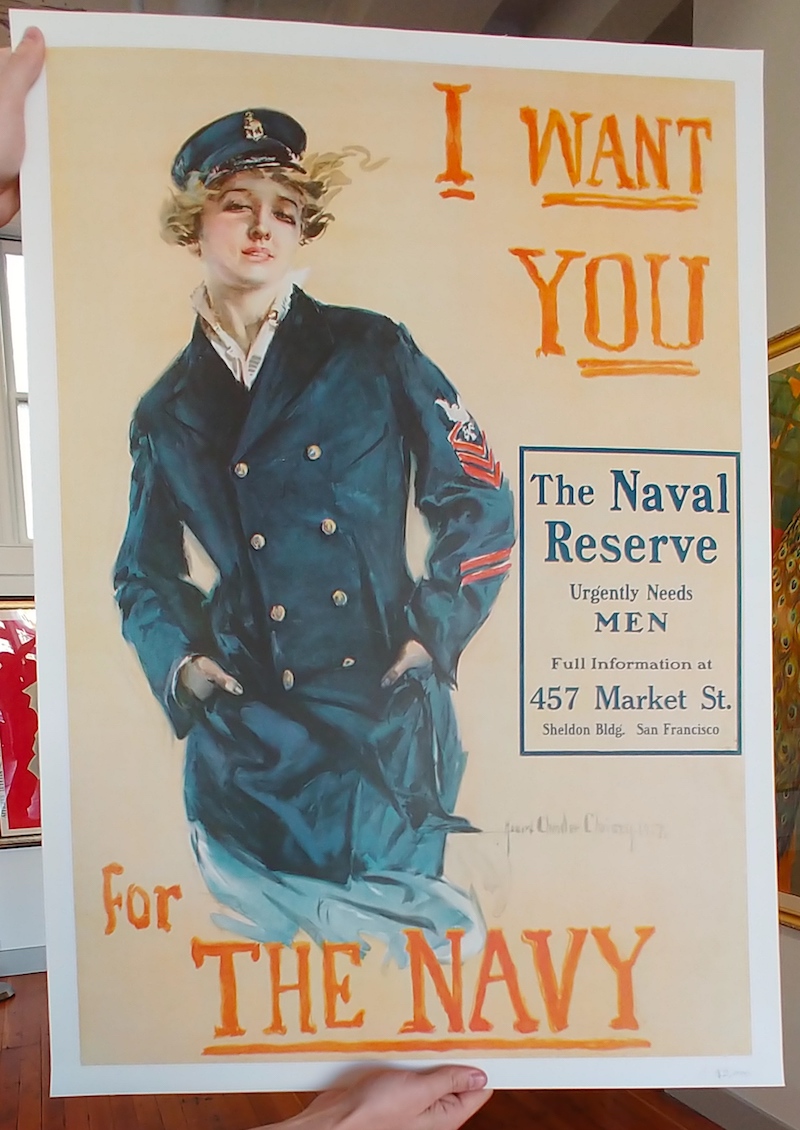 In an iconic poster from WW1, a female sailor exhorts recruits to show up for duty (note the SF address). | Photo: Joe Bonadio

AE: I’ve had an interest in history and propaganda since I was a teen. I was into it in high school, but it wasn’t something I could really afford to indulge in.

So I guess I’ve been really collecting war propaganda for maybe twelve years? Close to that.

JB: Just imagine what that kid back then would have thought—to know he’d own this kind of collection someday.

AE: I certainly was that person who would have been really excited to see it at a museum. I remember the first time I went to a museum—I think it was the Art Institute of Chicago—and saw a propaganda exhibit. And I owned a few of the pieces that were on display. And that feeling alone was amazing.

Now, fast forward eight years and I’ve got enough to host my own exhibit. It’s a cool milestone. And coming just short of my 3-year anniversary—I’m ecstatic.