This last year has been an endurance event, and as we slide into Summer, it’s a great pleasure to see the crowds finally returning to San Francisco. No one is happier than the retailers of course, and there’s one in particular who has landed firmly on his feet: Real Old Paper’s Andy England.

England first opened his vintage poster gallery in November of 2016, landing on the sleepy stretch of Columbus Avenue just across from North Beach’s Joe DiMaggio Park. Business was solid there, but when the Covid lockdown forced him to close in September of last year, England started eyeing Fisherman’s Wharf. Tourists are a big part part of his business after all, and the Wharf has clearly got ‘em by the busload.

England opened his new shop on Beach Street in March, right next to Ghirardelli Square, and it appears his instincts were sound: after just four months in the new spot, he’s already on track to eclipse the numbers he did on Columbus. Factor in Aquatic Park’s billion-dollar view, and it’s safe to say that Real Old Paper has found it’s rightful home in Fisherman’s Wharf. 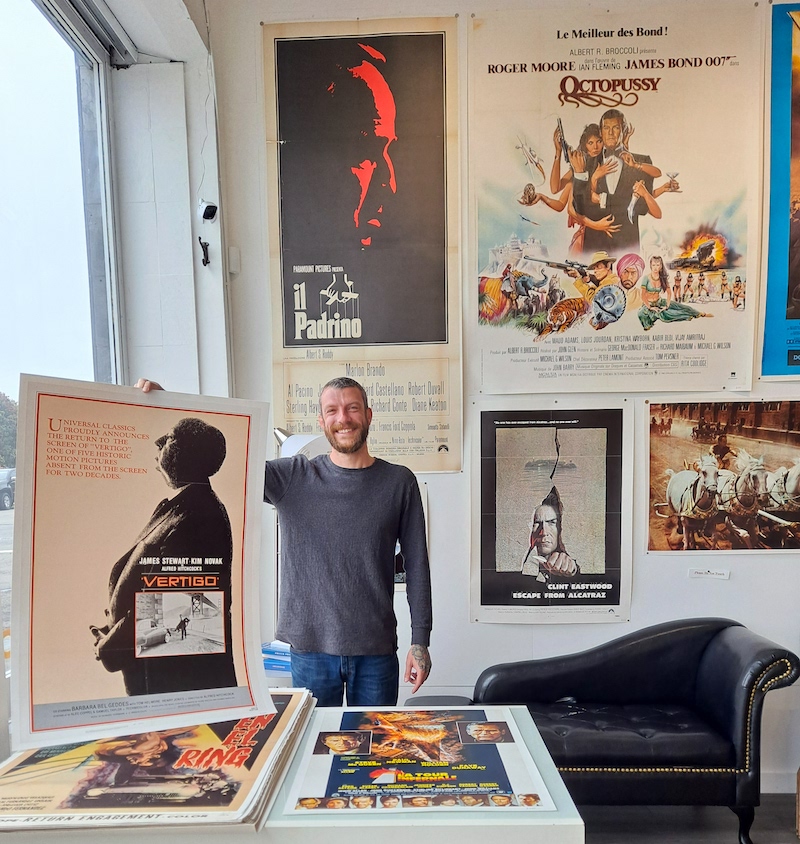 Andy England shows off an original poster for Hitchcock’s Vertigo. Note the poster for the Italian release of The Godfather above. | Photo: Joe Bonadio

Last week I spoke with England about his lively new space, and about his first love in the poster world: vintage movie posters. Lightly edited for clarity, our conversation is below.

Joe Bonadio: Andy, you’ve been at your new location for just under four months now, and apparently things are going well.

Movie posters were my introduction to this world. –Real Old Paper's Andy England Click to Tweet
Andy England: Yes, I’m happy to say. The location works, and the idea has been well received in the Wharf. I’ve met a lot of new customers who just happen to be in the neighborhood, sightseeing or shopping, and it has been getting steadily busier.

I’ve made some changes to the gallery, also. I’ve added a new movie poster section, and rearranged things to make the collection more inviting and easier to access.

JB: Bottom line, Beach Street seems to be a winner for you.

AE: Yeah, the Beach Street boom! It’s going strong. It’s nice, because it feels like it’s not so much of a gamble anymore. I’ve moved into a space that will work, and we still haven’t seen the city fully recover yet. So I know it will continue to get better. 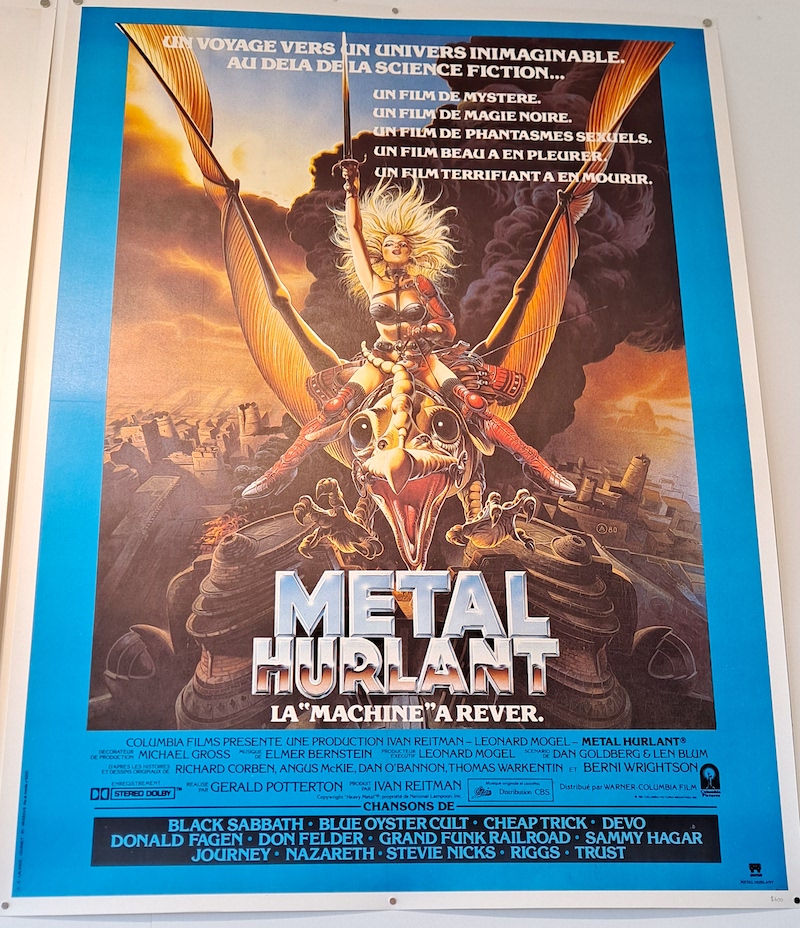 JB: How do your current sales compare to pre-pandemic days?

I’m just close to so many hotels and tourist attractions, and people have been coming in regularly. The Fairmont, the Argonaut, the Hotel Caza, they’re all right here.

JB: The business environment has changed a lot in the last fifteen months, too. From what I understand, Real Old Paper is now one of just two vintage poster shops in all of California.

AE: Yes, I’m one of only two now, and the only one in Northern California. We’re one of the only shops that’s still going, and I’m very happy to be representing the industry here. San Francisco has always had a vintage poster gallery. There has always been at least one, and now I’m happy to be that guy. 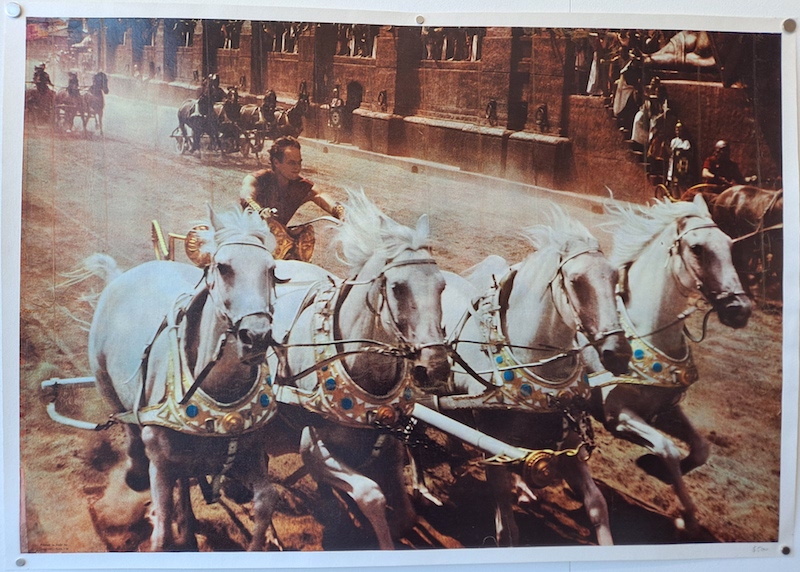 JB: You mentioned the movie posters, and you’ve recently put them front and center in the gallery space.

AE: It’s one of the questions I get most often: what movie posters do you have?  So many different kinds of people connect with movies, and how are movies usually advertised? With posters. The poster art is often the resonating image that you associate with the film.

For me, movie posters were my introduction to this world. That’s what originally got me into collecting: trying to track down my favorite movie posters and find the originals.

JB: How old were you then?

AE: Fifteen, sixteen. So it’s fun for me to share that experience with people who may be buying their first poster, and it winds up being a movie poster as well.

I have hundreds of them: French, American, Italian, anywhere from the 1950’s all the way through the ‘90s. I’ve been building the collection for a long time, and now I’ve dedicated an entire table to them at the front of the gallery.

You don’t even have to come into the gallery––you can see me flipping through movie posters from the sidewalk. And they’re designed to entice you, to make you want to see the movie. 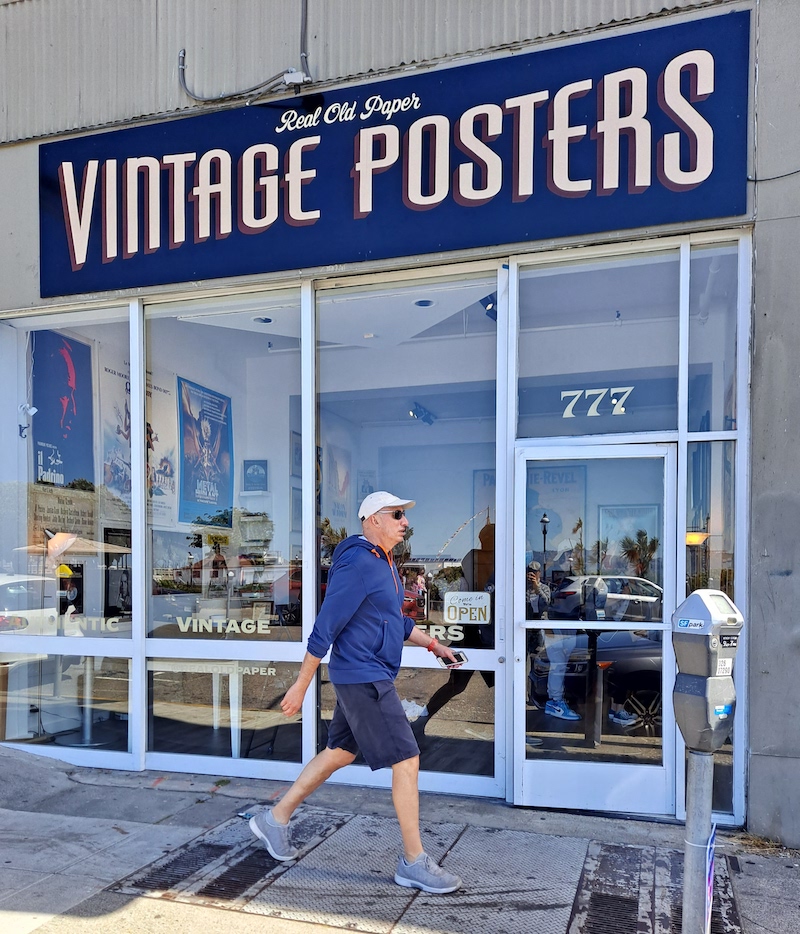 Real Old Paper’s new location in Fisherman’s Wharf has turned out to be a great venue for vintage posters. | Photo: Joe Bonadio

JB:  And they still do their job, and bring people in.

JB: One last question: what is your favorite movie poster?

AE: Of all time? That’s tough. Thankfully I own a few of my all-time favorites. I have one of the marijuana propaganda films from the 30’s, Marihuana. It’s the film that came out after Reefer Madness, so it was nearly as famous. It was released in 1936, when we started passing the first marijuana prohibition laws.

I have all of those at home, so you can’t see those at the gallery! But I’ve got a lot of great San Francisco films in the shop: Escape From Alcatraz, Vertigo, The Towering Inferno. I’m trying to keep it as San Francisco as I can.