When I originally decided to move to San Francisco over two decades ago, one of the main things motivating me was the history of the city—and the fact that history is still so visible today. From Alcatraz  to the Palace of Fine Arts, from Coit Tower to the Golden Gate Bridge, history beckons from practically every corner. As generations of fascinated travelers can attest, the centuries have left their indelible mark on these streets.

My appreciation for the relics of the past is also what led me to take up with Andrew England and his Real Old Paper Gallery. England has been collecting vintage posters since he was a teenager, and he opened his gallery on Columbus Avenue in North Beach in 2016. Fortuitously, he happened to choose a space barely a block away from my apartment, so it wasn’t long before we struck up a friendship.

I’ve been writing about England and his gallery ever since, and in the summer of last year, I filled in for him when he traveled to New York for an auction. I had no idea what I was in for: after selling a few thousand dollars worth of posters with almost zero training, England decided that I would be his new store manager.

Somehow he talked me into it—and admittedly, I’m glad he did. Over the last year at the gallery, I’ve met hundreds of great people from all over the world, and made a few friends. I’ve also learned more about vintage posters than I ever imagined possible.

Earlier this year, I started publishing my quarterly favorites here on the blog. And while I’m just a little behind schedule, that time has come once again.

Sutro Baths
1896
80″ x 81″
$13,500
Condition: Fine
We’ve brought in some striking pieces over the last few months, and this time around it was tough to choose. One of my easiest picks was the huge piece we recently acquired of the Sutro Baths, the enormous seaside bathhouse that once stood at Land’s End on the western edge of San Francisco. Built in 1894, the massive facility offered seven pools that could accommodate 10,000 swimmers, and held 1.7 million gallons of seawater at high tide.

The foundation of the baths is still visible from the Cliff House, and both visitors and locals hike the location to this day. Beyond the ruins, all that’s left of the baths today are a few old photos—and this fantastic poster. 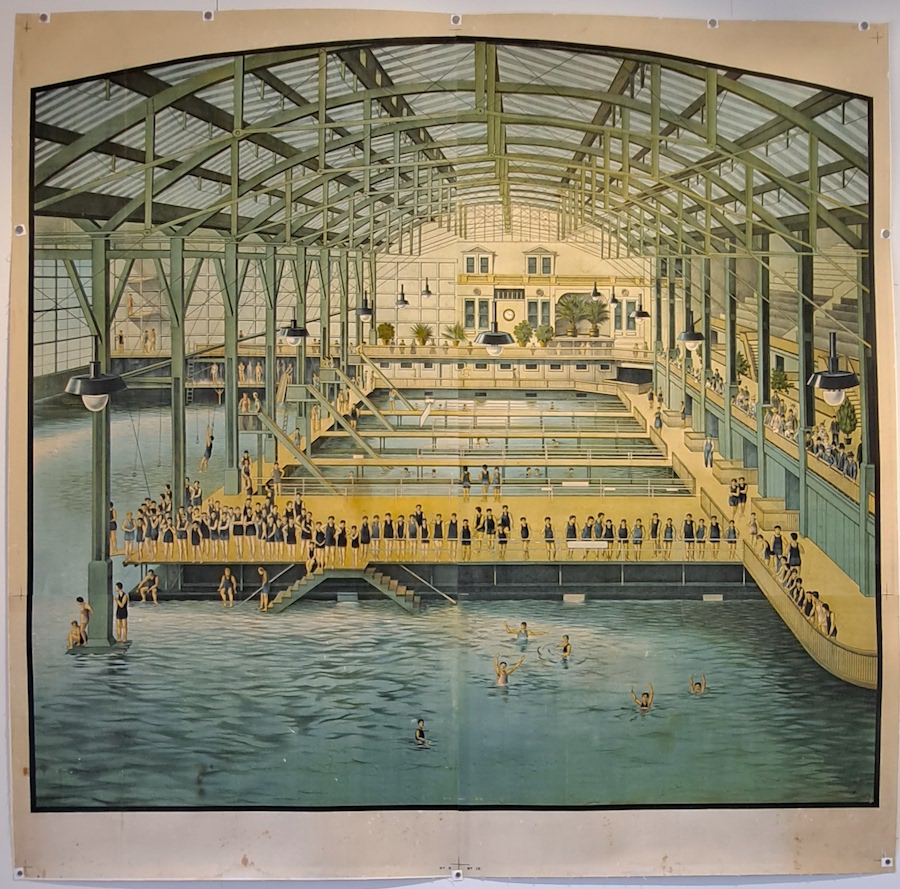 The remains of the Sutro Baths are one of the only examples of ruins within a major American city. This is just one of the pieces Real Old Paper carries featuring the baths. | Photo: Joe Bonadio

Lugano
1939
40″ x 25.5”
$1,650
Condition: Very Good
This classic Swiss travel poster was created by G. Boccasile over eighty years ago, and is notable for its striking color and subtly glamorous composition. A recent addition to the gallery, it’s a beautiful piece that is unlikely to remain in the collection for long. 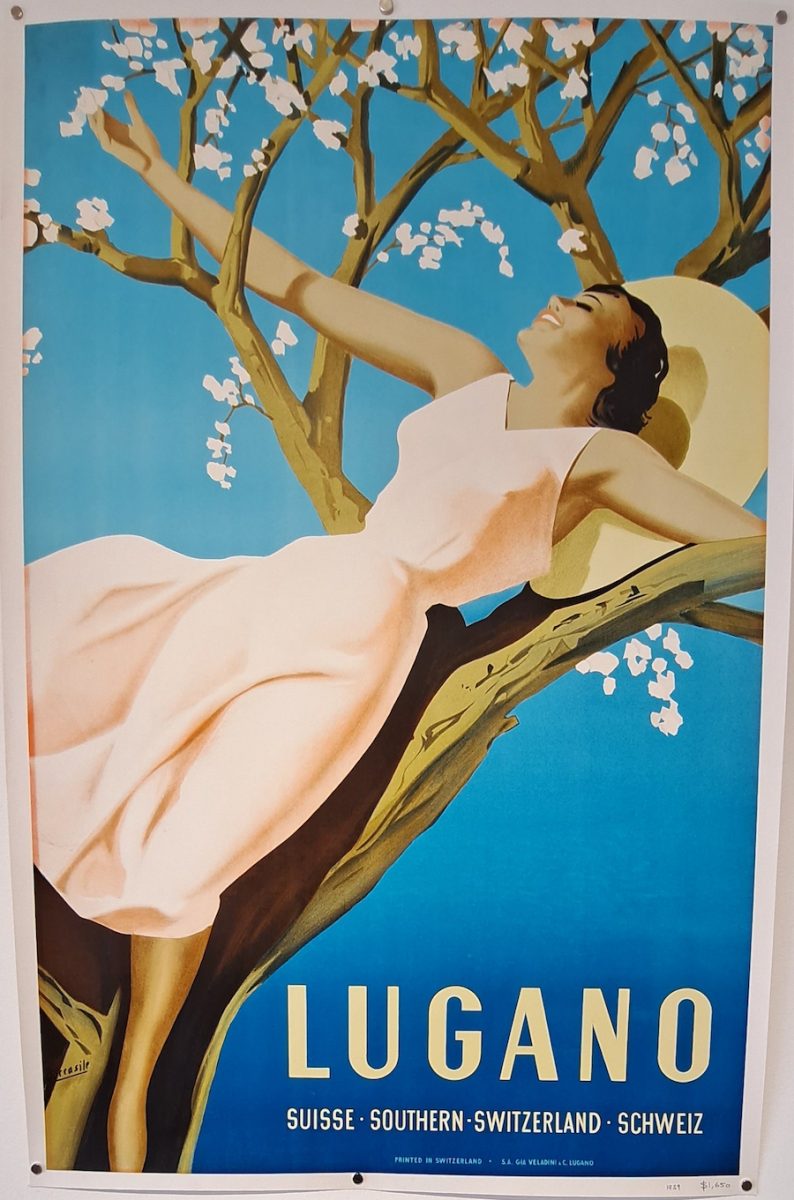 The vivd color and graceful pose make this one of the most attractive travel posters in the gallery. | Photo: Joe Bonadio 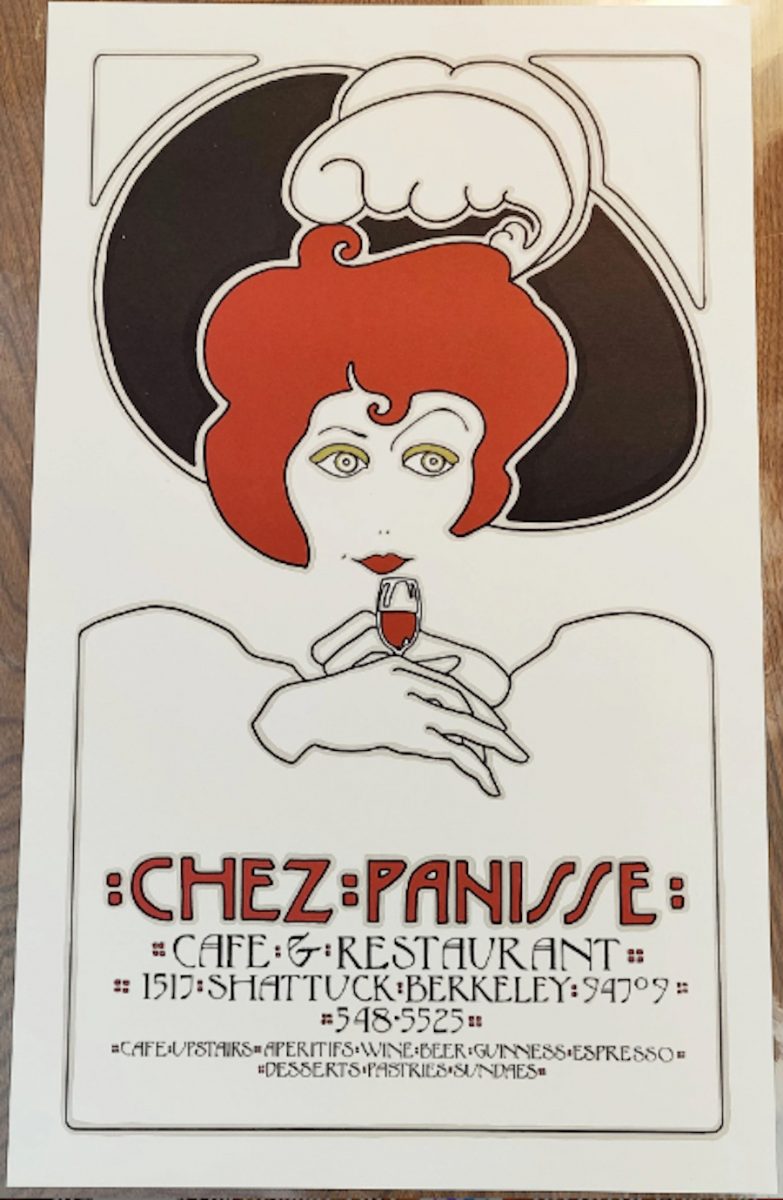 George – The Supreme Master Of Magic
1929
40.5″ x 26.5″
$1,250
Condition: Very Fine/Near Mint
Celebrating one of the most well-known magicians of his day, this poster incorporates Egyptian and Chinese imagery, well-coiffed female audience members, a witch and a trio of bright-red devils into one crowded, vividly colored canvas. Interestingly, it also includes exactly 18 people–and 18 playing cards. 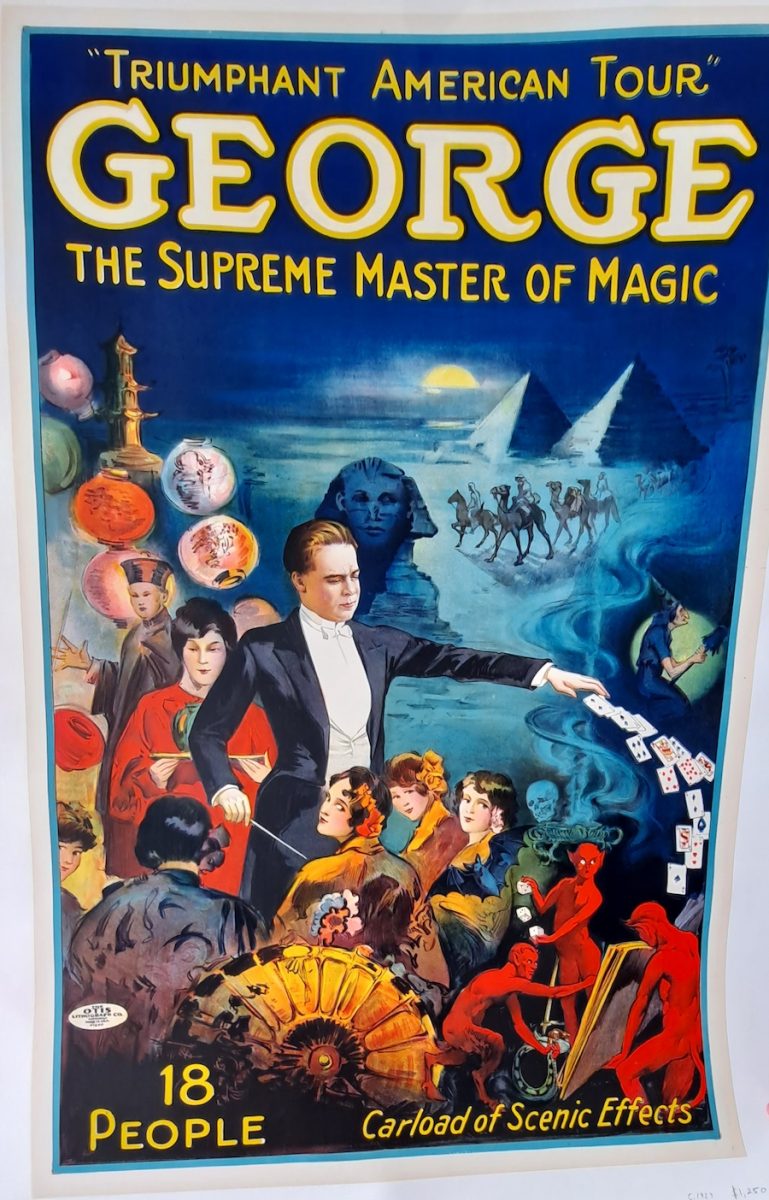 With its colorful and detailed composition, this is one of the classics of the magic poster subgenre. | Photo: Joe Bonadio

Parapluie Revel (3-sheet)
1929
121.5″ x 78”
$13,000
Condition: Very Fine
Created for the Revel umbrella company in Lyon, France, this is one of Leonetto Cappiello’s most effective designs, and the single most well-known modern poster image. Considered the father of modern poster art, Cappiello’s imaginative approach to his craft is legendary, and his ouevre is without peer. Striking in both color and composition, this piece focuses the viewer’s attention on the product, black umbrellas braving the wind. 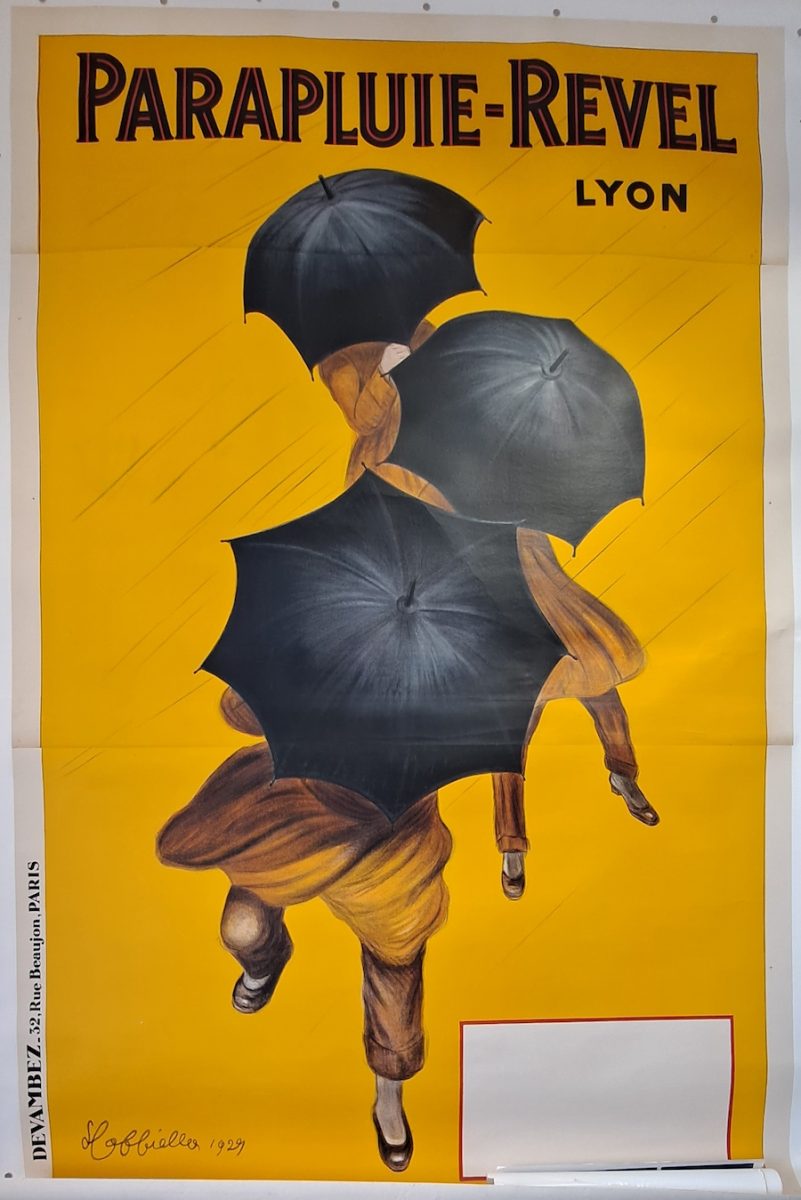 One of the most eye-catching posters in the gallery, Parapluie Revel is nearly one hundred years old. | Photo: Joe Bonadio

Star Wars
1977
28″ x 20”
$375
Condition: Very Fine
This brightly colorful poster is one of the first commercial posters sold after the release of the iconic film in 1977. Not as valuable as the posters for the theatrical release, which typically sell for many thousands of dollars, this is nonetheless a rare collectible that is highly coveted by Star Wars afficionados. 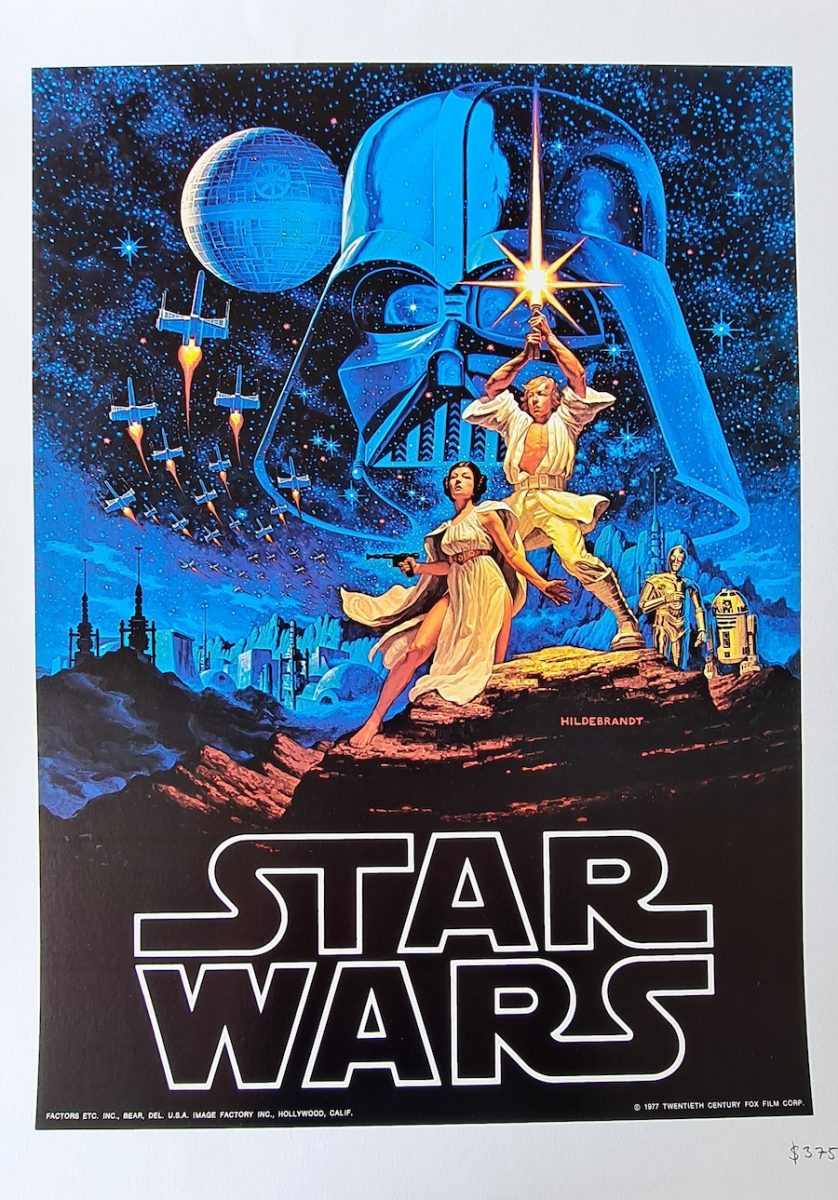 Star Wars inspired its own genre of collectibles, and Star Wars posters are highly sought after. | Photo: Joe Bonadio

That wraps up today’s picks, but keep in mind that’s just the tip of the iceberg. There are thousands of posters in the collection at Real Old Paper, so if you haven’t been in to the gallery yet, there’s no time like the present. We hope to see you there soon!