San Francisco has been a food town since its early years, and to this day it remains one of the most gastronomically obsessed cities in America. The numbers tell the story: according to the most recent estimates, San Francisco has a whopping 35.73 non-chain restaurants per 10,000 residents. Compare that to New York, where the number is less than 9, and you begin to see just how much San Franciscans love to dine out.

We’re also second in the nation when it comes to Michelin-starred restaurants (New York has got us on that count). Being that so many of our favorites are on the fancier side, it’s therefore surprising that one of the foods most closely associated with San Francisco is anything but. I’m talking, of course, about the humble and much-beloved burrito.

Though the claim is often made, SF can’t take credit for inventing the now-ubiquitous “food tube.” Burritos most likely originated in Northern Mexico–but it’s true that our city put them on the map. The San Francisco burrito (also called the Mission Burrito) has been served here since at least the early Sixties. The city, especially the historically Latin Mission District, has long been crowded with taquerias. And as one might expect, the competition between them is notoriously stiff. 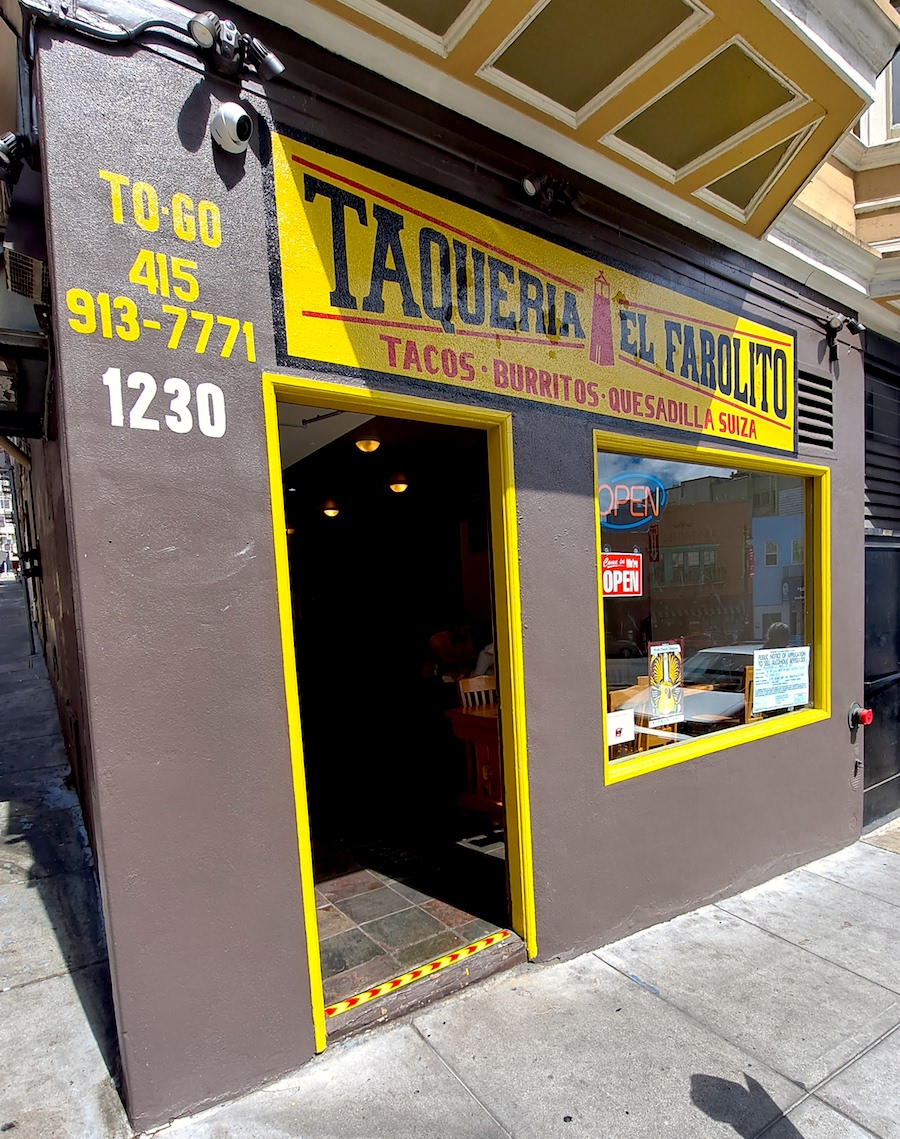 After months of anticipation, Taqueria El Farolito has opened its doors on Grant Avenue in North Beach. | Photo: Joe Bonadio

Which brings us to El Farolito. Founded nearly 40 years ago just off the corner of Mission and 24th Street, El Farolito is one of the oldest taquerias in the city, and among the most venerated. They’ve been on San Francisco Top 10 lists for decades, and in 2013, they were named the “most life-changing burrito in America” by no less than Esquire Magazine. It’s not every day that a taqueria gets name-checked by Esquire–but El Farolito is not your average taqueria.

I’ve been 15 times and had something different every time. It’s insanely good. -Jerico C., El Farolito Regular Click to Tweet
With its no-nonsense menu of burritos, quesadillas, tacos and other fresh Mexican fare, El Farolito delivers hearty, flavorful food at prices that are almost unbelievable. At a time when $15 burritos have become commonplace, El Farolito still sells a forearm-sized burrito for only $8.25, and a Super (with sour cream, cheese and avocado added) for just a dollar more. And that’s with fully ten proteins to choose from, including favorites like carnitas, al pastor and carne asada, as well as the less common cabeza, tripa and lengua. 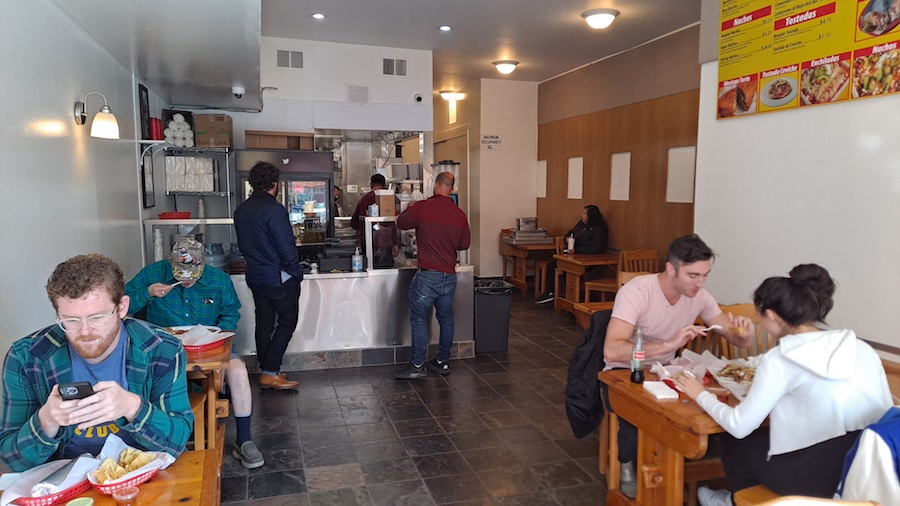 With its late hours and extensive menu, El Farolito is quickly catching on with North Beach locals. | Photo: Joe Bonadio

Such is their reputation that when news came that El Farolito was planning a location in North Beach, locals were ecstatic. But it wasn’t quite that simple. On the heels of that announcement came reports the restaurant would be denied entry to the neighborhood, due to its longstanding ban on chain stores. But as it turns out, it was just an error in the application process–and last month the taqueria finally took up residence at 1230 Grant Avenue, formerly home to local Asian-Fusion luminaries The House.

Naturally, the neighborhood couldn’t be happier about the taqueria’s opening. Last week I sat down with Santiago Lopez, owner of the new location and son of El Farolito’s late founder, Salvador Lopez. Our conversation is below.

Joe Bonadio: So tell me a little bit about the history of El Farolito.

Santiago Lopez: El Farolito started in December of 1983, in the Mission District. My father and two other people had started Taqueria San Jose across the street on 24th and Mission, on the other side of BART. He ended up selling his share there, and at that point there was a vacant location at 2779 Mission Street. He decided to start his own business, and that’s how El Farolito began. He passed away in January of last year. 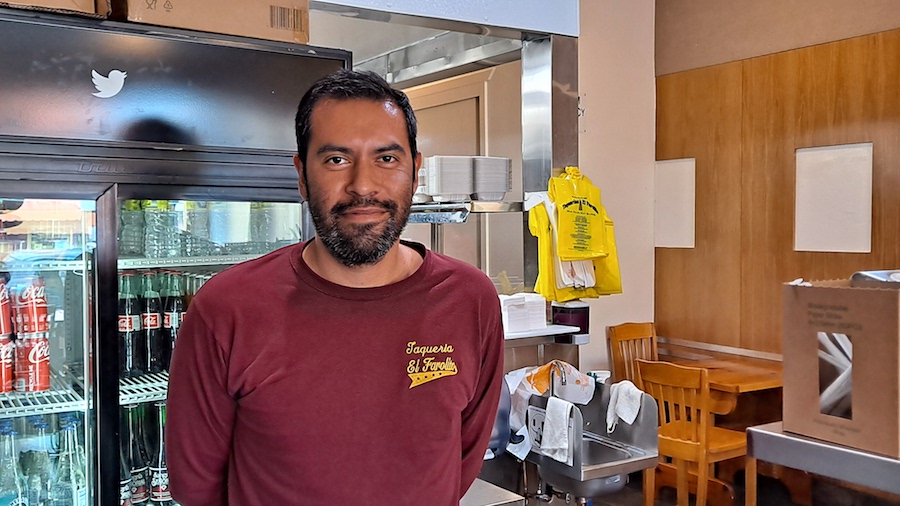 Owner Santiago Lopez behind the counter at the newest location of El Farolito in North Beach. | Photo: Joe Bonadio

JB: My condolences. How long have you been involved in El Farolito?

SL: I’ve been a part of the organization for 16 years. I’m one of three general managers, and we’ve taken over the responsibility to continue this tradition.

JB: How many El Farolitos are there now?

SL: Right now there are four in San Francisco: Excelsior, two in the Mission, and this one. Then there’s Oakland, South San Francisco, Concord, San Jose. There are three similar restaurants that are called El Favorito, in Santa Rosa, Rohnert Park and Sebastopol. 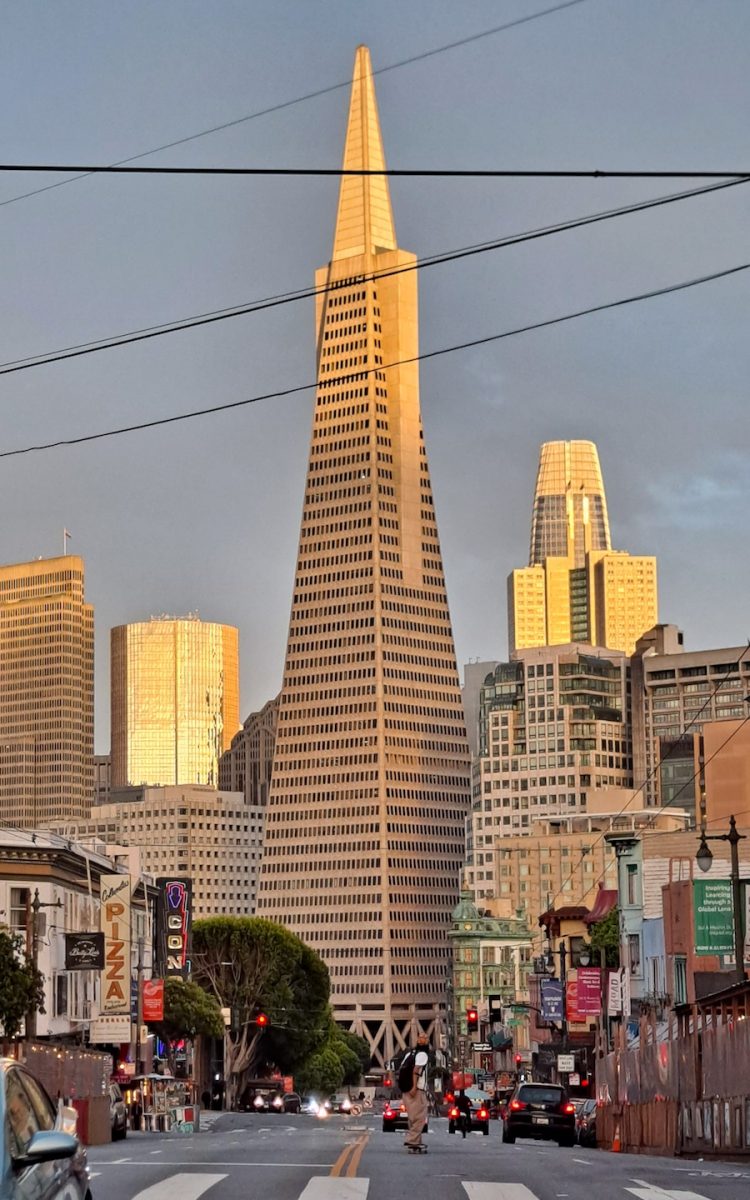 The owners of the newest location of El Farolito hope to become an integral part of the North Beach community. | Photo: Joe Bonadio

JB: You had a little bit of a bumpy road getting open here in North Beach.

SL: Yeah, that’s right. On the application there was a mistake in the number of restaurants, listing El Favorito with the same brand and colors. That triggered the application being rejected, and we had to correct it. But word got out in the city that there was a problem with the number of locations. But once we fixed that problem, we were able to open in this location.

SL: We truly respect the community here, and their traditions. It was just a big mistake on our part, and we truly apologize.

We’re just a taqueria that wants to continue sharing the tradition and recipes of our founder, and that’s it. We don’t consider ourselves “Mission Style.” It’s not even like that—we’re just El Farolito wherever we go. We’re very happy to be here, and we’re still not part of this historic district. But we truly want to contribute, and to get to that point. And that takes a lot of time and respect.

SL: We hope so. This place already has its own history and food scene, and we just want to be one more option in this amazing culinary district.