As we head into Thanksgiving this year, San Franciscans are confronted with an entirely new reality. But as much as the Covid crisis has slowed things down in the city, North Beach has shown a lot of resilience over the past eight months. That’s something to be thankful for: as anyone who has visited the neighborhood lately can tell you, North Beach is not only open for business—it could be on its way to being better than ever.

Ironically, it was the restrictions themselves that made it happen. When faced with new rules prohibiting indoor dining and drinking, San Francisco businesses quickly moved outside, and North Beach has been on the vanguard of that change. At the outset of the crisis, the North Beach Business Association delivered 100 traffic barriers to small businesses, allowing them to cordon off parking spaces granted under the city’s Shared Spaces program. This jumpstarted a trend that has since transformed the neighborhood.

When you think about it, it makes perfect sense: North Beach may be the most charming, photogenic neighborhood in the city. Why wouldn’t we all be sitting outside? Looking back now, it seems as if we always have been. 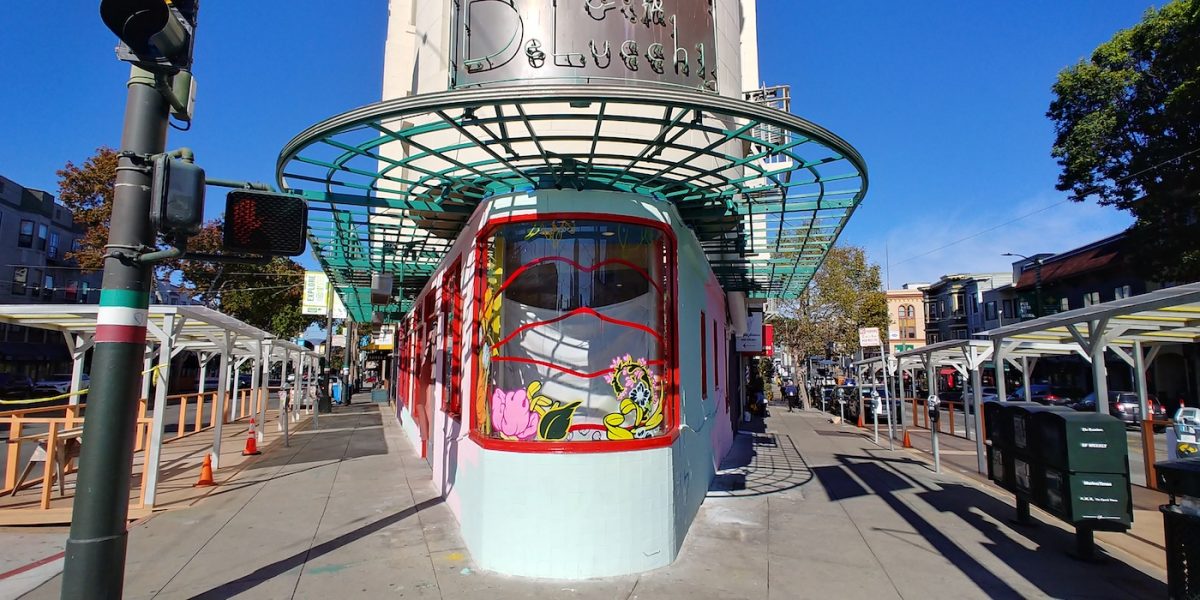 North Beach’s in-progress Red Window, with its double parklets, is about to become one of the largest restaurants in North Beach. | Photo: Joe Bonadio

North Beach may be the most charming neighborhood in the city. Why wouldn’t we all be sitting outside? Click to Tweet

Yes, North Beach is alive and kicking. And despite the city’s recent move to halt indoor dining, there is some exciting news to report in the neighborhood. So let’s get on with it, shall we?

First off, I’ll address the elephant in the room: if you spend any time at all in North Beach, you’ve noticed the work underway at Columbus and Stockton, the former location of Caffé DeLucchi. According to the signs, the incoming project will be called Red Window, and feature low proof cocktails alongside a Spanish menu. The newcomers are also planning a takeaway option (Little Red Window, naturally) with empanadas and cocktails to go. And they won’t be short on seats either: with parklets underway on both Stockton and Columbus, they’ll likely be able to seat over 100.

So who is behind this intriguing new spot? They’re keeping it mum for now, but suffice to say the owner is a known quantity in the neighborhood—and that I’ll have more to report very soon. 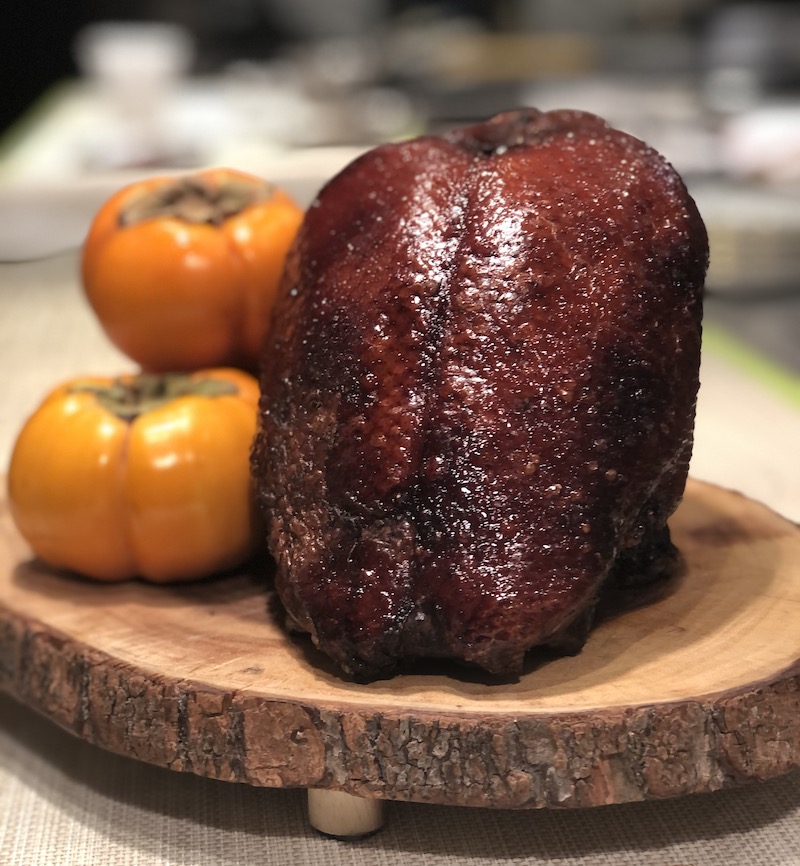 In the meantime, fans of high-end Asian fare may have heard that Eight Tables, George Chen’s luxe upstairs “private dining” restaurant, briefly reopened earlier this month. Sadly, they barely got out of the gate before the city shut down indoor dining once again. But intent upon keeping the kitchen staff they just hired back for Eight Tables, Chen found a way: starting on December 1, they’ll be offering gourmet dinner sets centered around their famous Peking Duck for both pickup and delivery.

These will be 5-course meals for $90 per person, a bargain for what you get: just one of the courses, the Dungeness crab caviar with Pomelo Sichuan black cod, caught my eye right away. Minimum two people, so remember to get a wingman. Of course, while they wait for indoor dining to bounce back, sister restaurant China Live is keeping the fires burning with both outdoor seating and takeout/delivery. 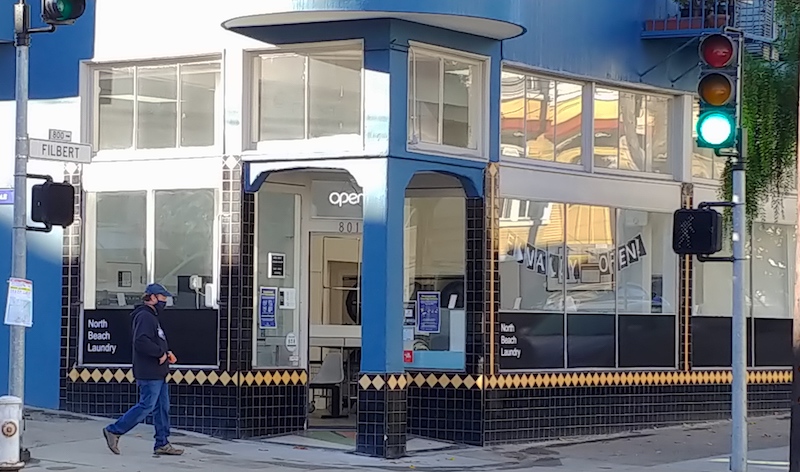 Speaking of bouncing back, it finally happened: North Beach Laundry has returned to the corner of Mason and Filbert. Lest you dismiss this as small potatoes newswise, I’ll remind you that this laundromat appeared in Steve McQueen’s famous chase scene in Bullitt. It has also been closed since October of 2018: for you non-math-types, that’s over two years ago. And as someone who lives steps away from NBL and does not own a washer and dryer, I can tell you this is very big news indeed.

They may have taken their sweet time, but the new owners certainly did it right: all of the machines are brand-new, and take both coins and cards. And these babies are fast, meaning you can do your wash in under an hour. Check them out online, and during the intro period you can score a free wash.

Of course, with all of the ongoing Covid restrictions, many of us have been missing our favorite watering holes. I’m no exception, and the place I pined for the most was the legendary Vesuvio. While it’s not exactly the newest news, the bar recently reopened, serving in the freshly scrubbed Jack Kerouac Alley.

Vesuvio has partnered with neighboring Bulgara for food, and everything seems to be working out swimmingly so far. It may not be quite the same as sitting at that inimitable bar, but the alley makes for a louche, vaguely European setting that suits the place—and it sure is good to see everyone again. 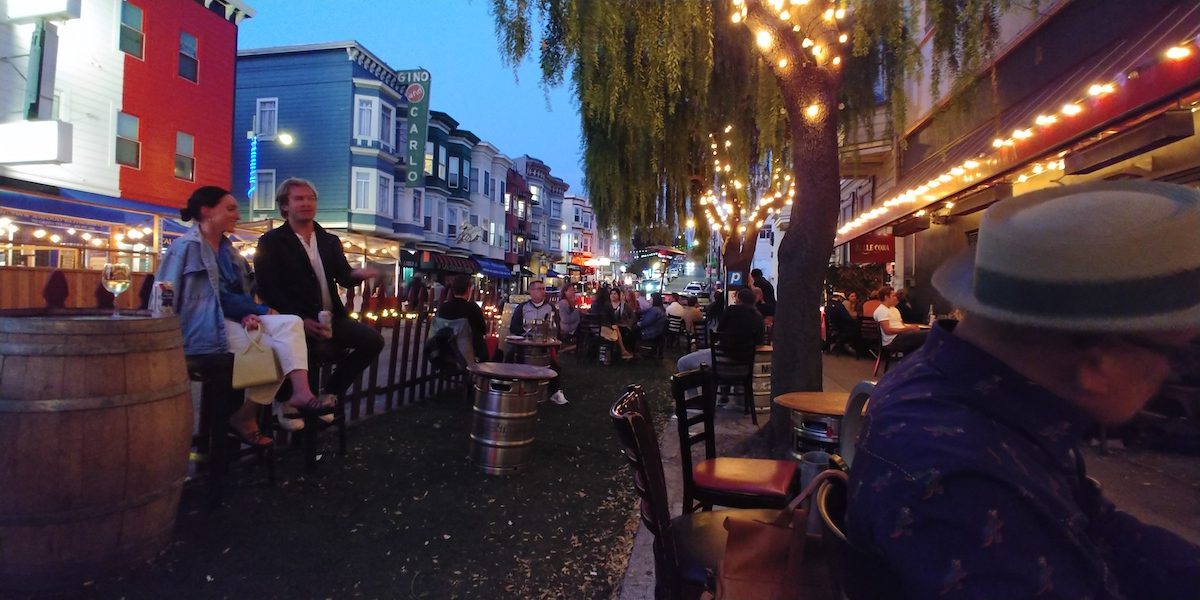 The patio at Belle Cora has become a hub for the North Beach neighborhood. | Photo: Joe Bonadio

Meanwhile, a couple of blocks to the north we’ve witnessed a rebirth of sorts for five-year-old Belle Cora. Forced to move outside in the pandemic, the locals-heavy wine bar/café inherited a surfeit of space out front, making their comfy patio into a bonafide beer garden.

The spot has never been more appealing—and that’s only the beginning. During shelter-in-place, the restaurant brought in chef Matt Woods for a pop-up, and he wound up revamping the entire menu. The new food program is a huge hit with the neighborhood, and the place seems to get busier every day. In fact, their popular Bergey Burger just snagged “Best Burger” honors from Best of The Bay, so the crowds are likely here to stay.

Across the street, the antics continue at California Fish Market. As I’ve written here before, this summer the owners of the former Pasta Pop-Up opened a fish market and restaurant directly next door to the long-established Sotto Mare. Now don’t get me wrong; competition is always healthy, and good for business. But when CFM chose their generic name and erected an awning almost the exact shade of blue as Sotto’s, some wondered about their intentions. 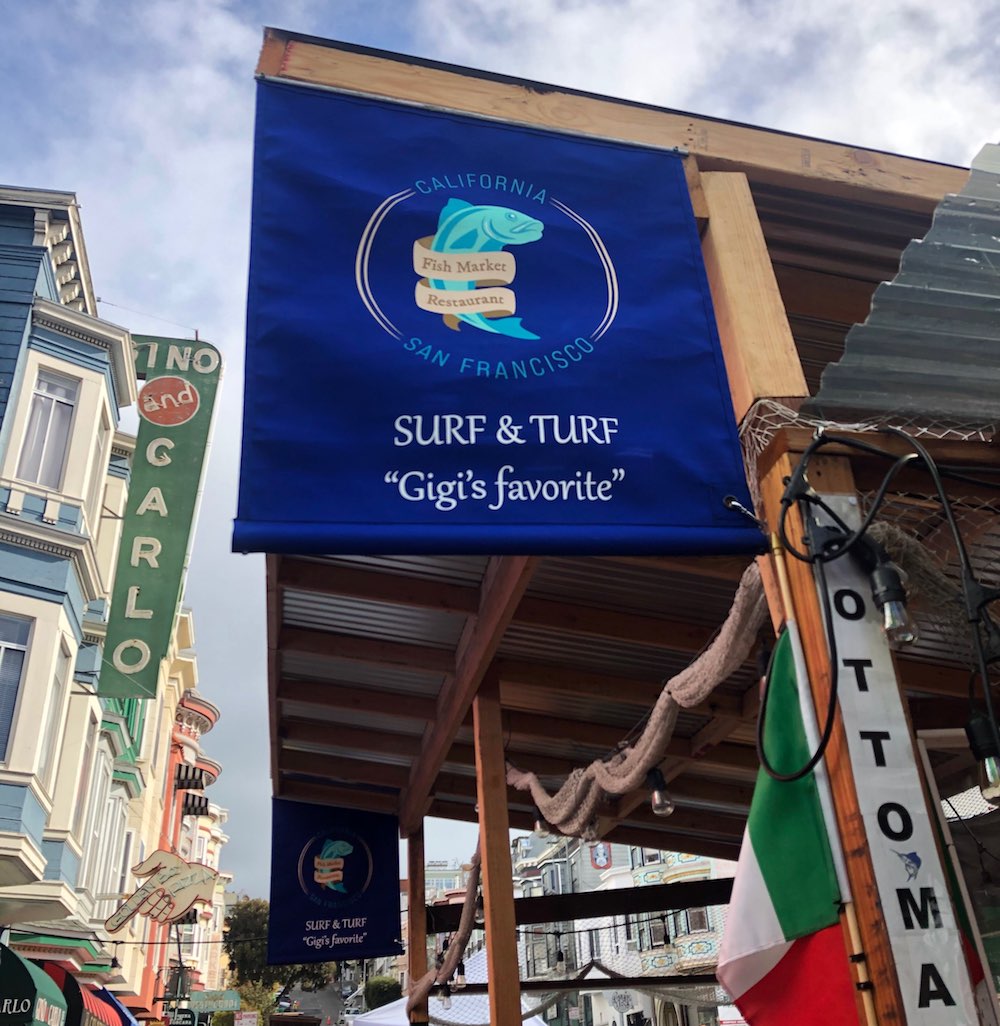 The avaricious folks at California Fish Market have been clouding the water to get customers, to put it mildly.

Wonder no more: amid reports that the restaurant has been poaching their neighbor’s tables, the people at CFM have made their game crystal-clear. This week, signs went up proclaiming the new restaurant as “Gigi’s Favorite!” Of course, Gigi Fiorucci was the original founder of Sotto Mare; some still call the place Gigi’s, so this appears to be a blatant attempt to confuse diners.

I find these tactics beyond distasteful, and like many in the neighborhood, I’m disappointed in the people behind CFM. They have two other restaurants in North Beach; I’ll refrain from printing their names. But I don’t expect to cross their thresholds until this chicanery stops.

Back on the positive tip, adding to the list of new arrivals is the oddest entry of the bunch: Shuggies Trash Pie & Natural Wine. The brainchild of Ugly Pickle founders Kayla Abe and David Murphy, the restaurant will be serving pizzas created with exactly what their name suggests: food waste, or less-often used items that usually wind up in the garbage bin. 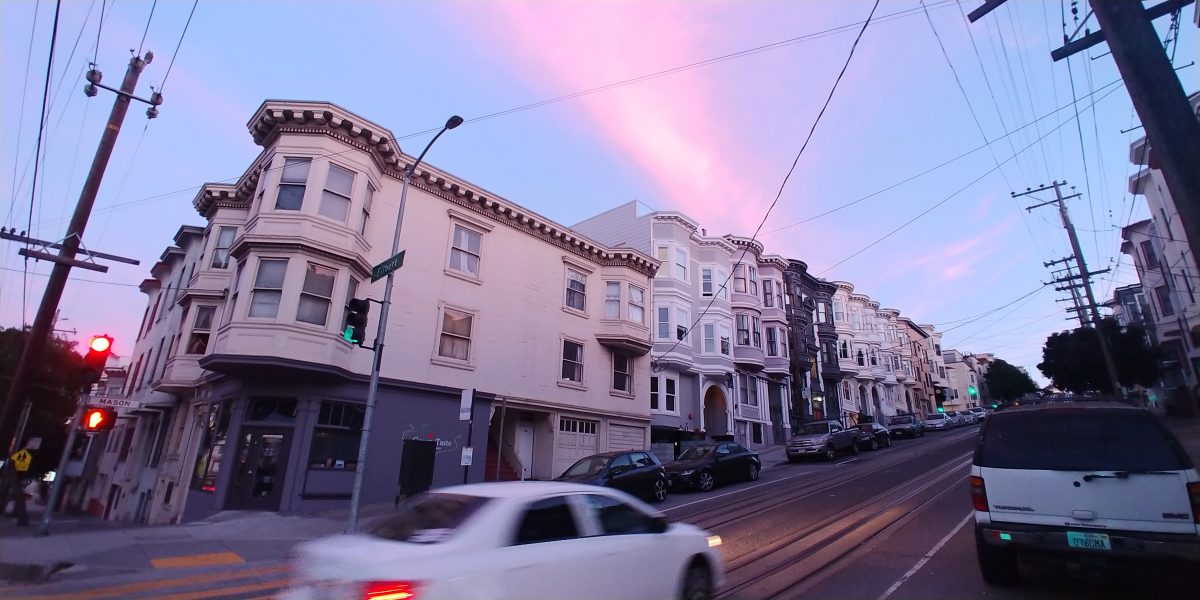 The term is upcycling, and the partners share the lofty goal of a zero-waste restaurant—something that has yet to be pulled off. They’ve laid claim to the former location of The House, which sadly closed over the summer, and have just launched a Kickstarter campaign to fund the new venture. It already has plenty of momentum, so we’ll be keeping an eye on this project for sure.

Lastly, it looks like we’ll be seeing activity in the old Tosca space soon. The venerated century-old bar and restaurant was set to reopen just as the lockdown began, with chef Nancy Oakes, restaurateur Anna Weinberg and design whiz Ken Fulk joining forces to reimagine the space. Thankfully, just like all the cool kids, they’ve completed a new parklet out front on Columbus Avenue–and they’re now taking reservations for November 25th at their website. More to come!