For me, well-made clothing qualifies as one of the great pleasures of life. I’m not sure why that came to be, exactly. It may go back to watching my father suit up for the workday; having served in the Air Force, he was meticulous about his appearance, and no stranger to vanity. Or perhaps it was my years spent living in New York, where I found shopping to be a fiercely competitive sport, one at which I excelled. Whatever the cause, though I’m far from a clotheshorse, I’ve always had a penchant for nice duds.

That being said, I never actually had anything custom-made until moving to San Francisco’s North Beach–and finding Al’s Attire. I’ve been shopping at the North Beach boutique for a few years now, and I can’t emphasize it enough: having a garment designed and created to your specific measurements is where it’s at. You just can’t get the same level of quality and fit any other way.

Understated elegance and attention to detail are just two of the qualities that set Al’s Attire apart. | Photo: Joe Bonadio

It’s the truth: once you say goodbye to the rack, you never go back.

But there’s another reason that I love Al’s Attire, one that’s even more powerful. You see, I’ve always had a fascination with old things, especially when those things are imbued with history and nostalgia. I love antiques, curiosities and objets d’art, and I can remember where I bought just about everything I own–and from whom.

This extends to clothes, of course. Do you know that feeling of regret when your favorite pair of boots, forlorn and threadbare, have walked their final mile? Have you, like me, held on to such items for weeks or months out of some irrational refusal to let go? If so, you’ll understand and appreciate Al’s special skill, his superpower if you will: Al can turn back the clock. 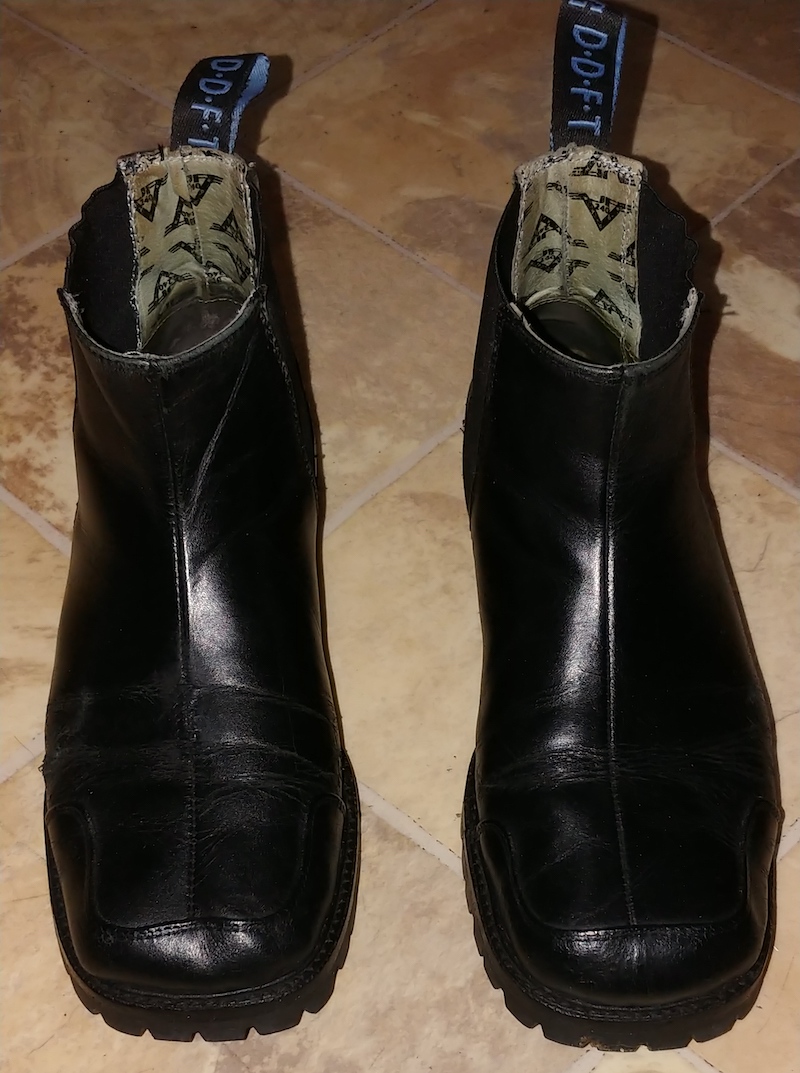 I’ve written here before about some of the minor miracles that Al has performed in the past. It started with my favorite pair of boots, nearly three years ago. An old pair of square-toed John Fluevogs, I had worn them until they were utterly decimated; if I had put these boots on the sidewalk, there would have surely been no takers.

I initially brought them into Al’s Attire to see about making a similar pair. But once we got to talking, Al informed me that he could remake them….AND bring back the originals. 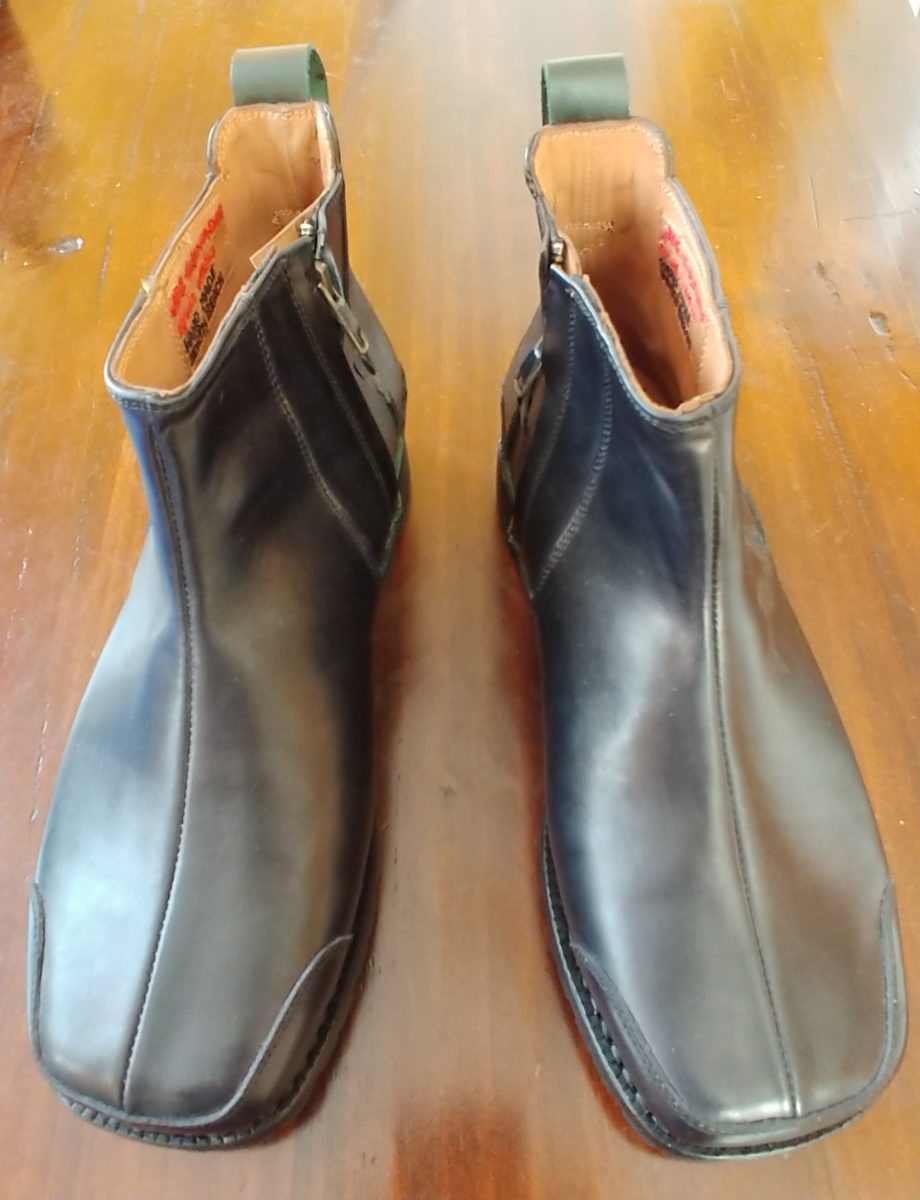 I have to admit, I was skeptical–these boots were busted up. I trusted Al though, so I gave him the okay, and we were off to the races. As I posted at the time, the results were fantastic; you can see the new version above. Instead of mourning a lost pair of boots that couldn’t be replaced, I now had two versions: a vintage pair, and a brand-new one. It was liberating. 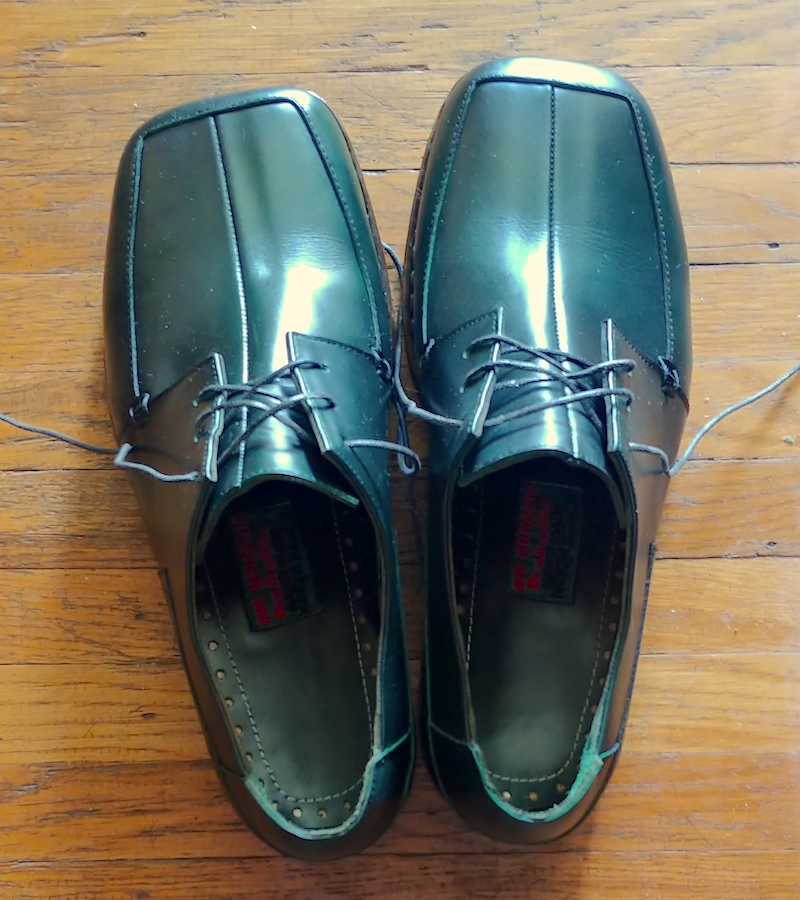 Emboldened, I managed to fish another blighted pair of Fluevogs out of my closet. Al did his magic, and resurrected them, too. The originals are an unusual olive color, and I had him make the new pair in midnight green. They might be the nicest pair of shoes I’ve ever owned.

Al’s Attire has helped me with a couple of old jackets, too. A black leather Kenneth Cole that I picked up at a sample sale in Manhattan 20 years ago still looked okay, but the lining was shot–and the sleeves, which were always a touch too long, were starting to fray. And to be honest, it never really fit me properly. Al took one look at it, and knew he could save it. I chose the fabric for the new lining, stood for my measurements, and Al got busy. Today, that jacket looks better than the day I bought it. 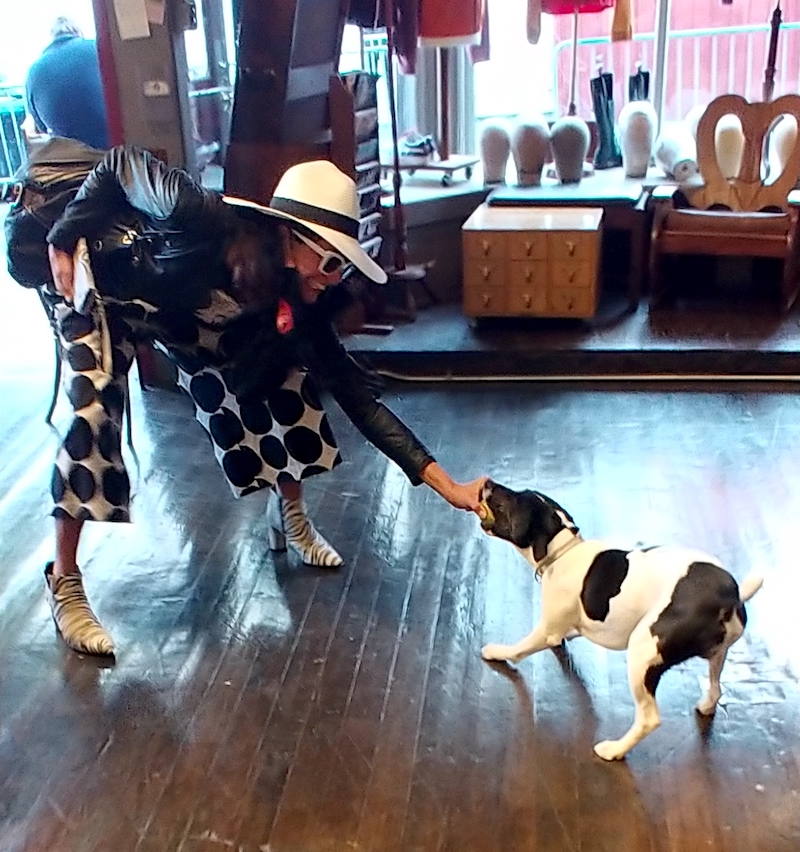 Pepper and Romalyn battle over who does black and white better. | Photo: Joe Bonadio

Same story for a suede number that I brought him. It was even older, so its light brown surface showed a few stains, and the thing barely fit me at all anymore. Now it looks great, fits perfectly, and it’s back in regular rotation.

In these tricky times it’s all about stretching your dollar, and there are few better ways to do it than restoration and repair. And honestly, it’s a lot of fun to turn back that clock. So take a good long look in that closet, way in the back, where the forgotten old relics are. There are always at least one or two precious things hidden there; you’ll know them when you see them.

Bring them to Al’s Attire–and restore one small piece of your past.