In a neighborhood as deeply rooted in tradition as North Beach, it should come as no surprise that local bonafides are incredibly important. To have been born in the Bay is one thing, in the city another. And to say you were born in North Beach, well, that’s something else entirely.

So that makes it all the more remarkable that there’s only one restaurant in North Beach that’s owned and run by a family that was born and raised in the neighborhood. But as far as I know, Sotto Mare is the only place in ‘the Beach’ to fit that bill–and Rich and Laura Azzolino and their daughter Ria are that family. And as anyone who knows Rich will tell you, that kind of history comes with lots of good stories.

On a recent wind-blown afternoon, Rich and I took a little stroll around North Beach. We talked about the neighborhood as it is, and was–and Rich told me a few things about the place I didn’t know.

Naturally, our path began at Sotto Mare. After eleven years, the seafood house has become a North Beach staple. With its straightforward style and Italian-inflected menu, it’s one of the things that epitomizes the old school ethos of the neighborhood.

Rich started out by telling me what used to be right across the street: North Beach’s biggest grocery store, Buon Gusto Market. “From Cioccolato on Columbus all the way over to Belle Cora,” Rich explains, “it took up that whole end of the block. I’d walk by here every day.” 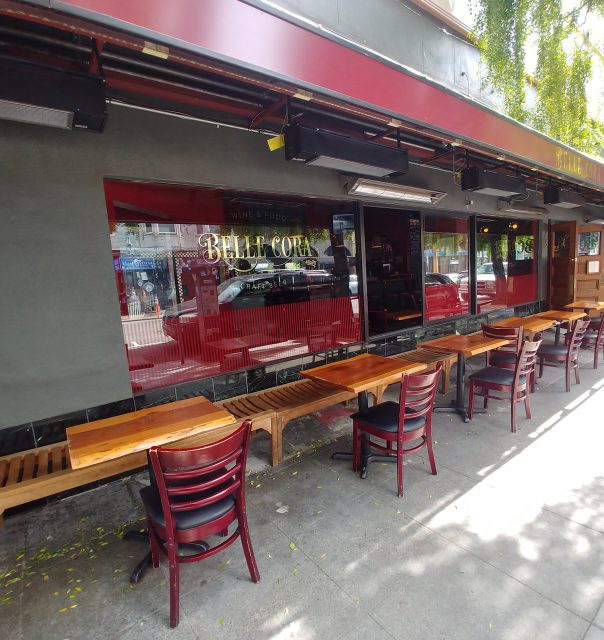 Approaching the corner of Columbus and Green, Rich points across the street, where the former Panta Rei space is being renovated. “That was the first location of U.S. Restaurant, with all the cousins, and the ladies who ran it,” Rich smiles at the memory. “That was a great place.”

As we round the corner, we are bathed in the aroma of fresh fudge that wafts from the open doors of C. Cioccolato. “Here where Alchimia is now, this was the finest jewelry store in North Beach, R. Matteuci,” Rich remembers. “And there used to be a big clock standing right here, that’s how we all kept track of the time.” (The clock, an ornate 25’ beauty which dated from 1906, was destroyed by a truck in 1999.) 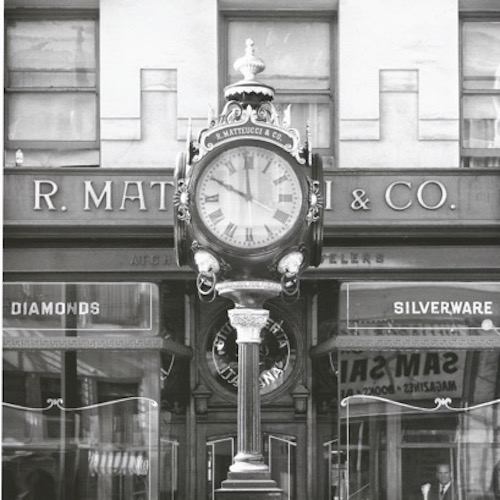 The grand clock that used to sit in front of R. Matteuci at 450 Columbus. | Photo: Fred Lyon, R. Matteuci 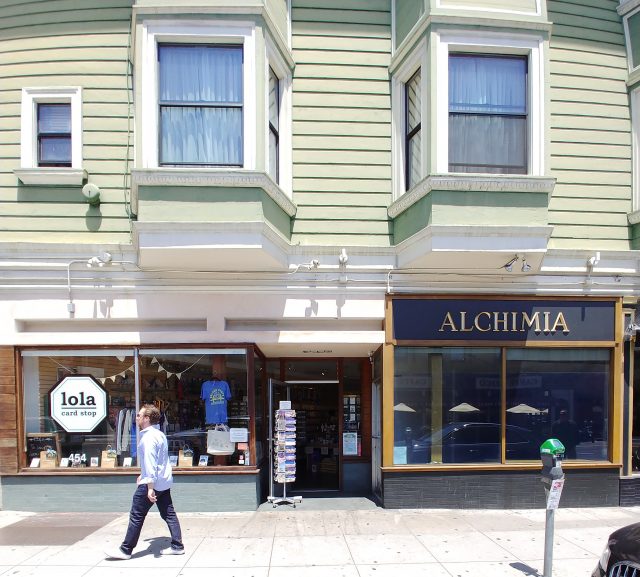 The building at 450 Columbus as it appears today. | Photo: Joe Bonadio

Rich explains that a lot of the restaurants on Columbus used to be small retail businesses. “These were all just little shoe shops, clothing stores, travel agencies, you name it.” He points out the Stinking Rose. “That was Anchor, the drug store,” he says. “they had all the leeches,” Rich tells me, drawing a blank stare. “Yeah, in case you got a black eye, that’s where you came for leeches, to get the blood out.” Hoo boy! 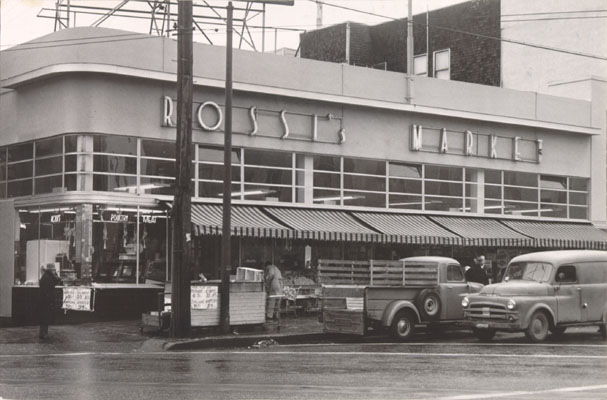 We head across Columbus and walk to the intersection of Vallejo and Stockton Streets, where Victoria Pastry sat for 98 years before relocating to its current spot off of Washington Square Park. On the way, we pass by May Shun Trading Co., sundry store and onetime site of another North Beach legend: Florence Ravioli. “Yeah, you used to be able to watch them make ravioli and tortellinis, right in the windows,” Rich tells me. Florence made fresh pasta at the location for 52 years before closing for good in 2003. 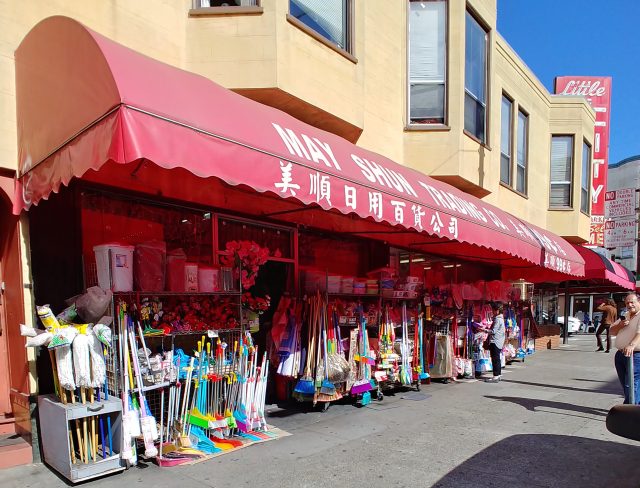 A couple of doors down, seemingly unchanged by time, is Little City Meats. “Little City has always been there, I never remember that spot being anything else. When you’d go in there with your mom, they’d hand you a free hot dog to keep you quiet,” he says. “Now, over there where Firenze (Firenze By Night) is now, that used to be the place you’d get your refrigerators, washing machines and whatnot.” 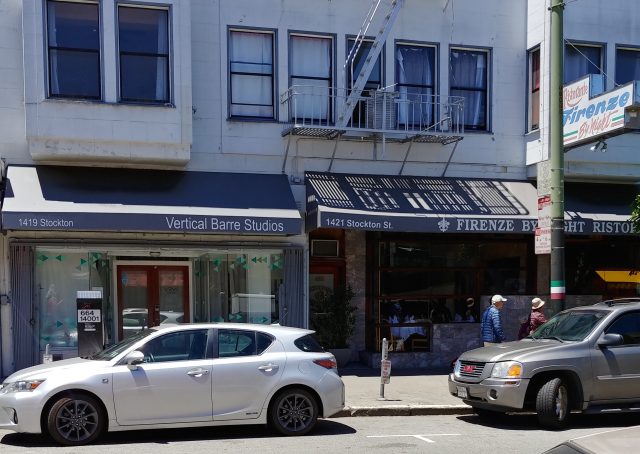 Next door, where Vertical Barre Studios is now, sat a place Rich has mentioned to me in passing more than once: “This is where we’d run up to get a salami sandwich for a quarter,” he says, beaming. “Panelli’s delicatessen. On a roll with mustard. We’d take it over and eat it on the steps at the (Salesian) Boys’ Club.” Still remembered as one of the great North Beach delis, Panelli Bros. did business on Stockton Street for 82 years, shuttering in 2002. 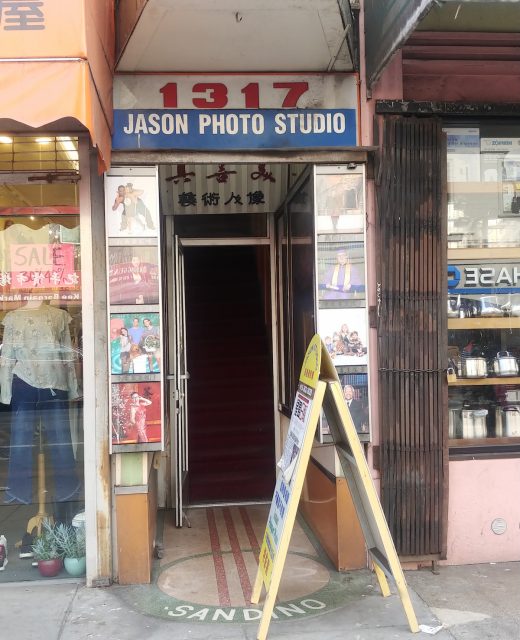 At 1317 Stockton, where Jason Photo Studio still operates out of a tiny postage stamp of a storefront, was Sandino Photography. “If anyone got married in North Beach, that’s where all the photos were taken,” Rich recalls. “that’s where our grammar school photos were taken, class pictures, everything.”

“It’s funny, whenever anyone was fooling around with a camera back then, we would call him Sandino.”

As we head down towards the afternoon traffic on Broadway, Rich reminisces. “Everyone on these blocks knew who we were, who our parents were,” he says. “If we fooled around or got out of line, the news would get home before we did.”

Rich points out the building on the northwest corner of Stockton and Broadway, currently home of East West Bank. “For probably thirty years, that was known as Ravazzini’s. One of the top men’s clothing stores,” Rich tells me. “Back in high school, I got my first sport coat in there.” 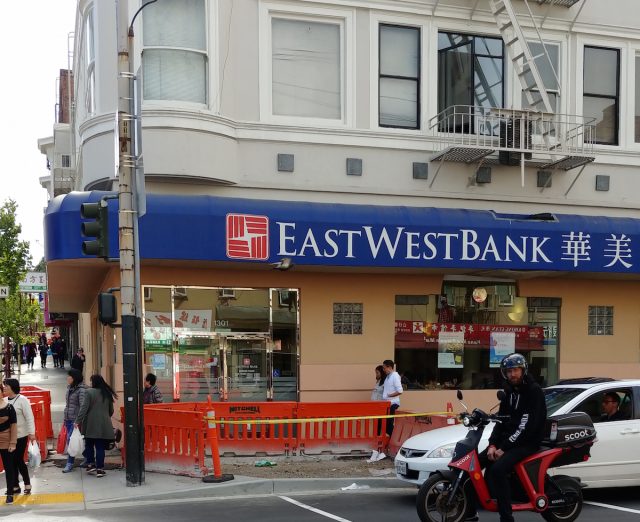 Our walk ends where the story began, at the corner of Broadway and Grant Avenue. Rich’s grandfather opened his first business on that corner back in the late 1920s: Azzolino & Son, a men’s haberdashery and dry cleaner. Of course, Grant Avenue was Dupont Street back then, and Broadway was the oft-contentious dividing line between Chinatown and North Beach. It’s not a quiet spot now, and it wasn’t then. 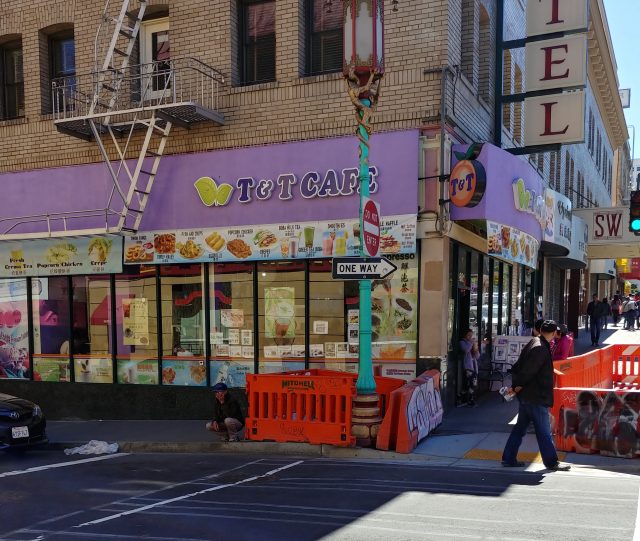 “It all happened right there,” Rich says, gazing across the street. “My grandfather passed away in 1959, my father closed it in 1960.” But unlike many Italian families that moved to the suburbs in the ensuing years, the Azzolinos remained in North Beach.

“If you look down Broadway now, you see all the striptease joints,” Rich says. “I can tell you, until 1963 or ’64, there wasn’t one of them. This was really restaurant row, from New Joe’s to Vanessi’s, Swiss Louis’, Rex’s, all of them.”

Joe Content regularly reports on various happenings in and around San Francisco’s North Beach, and the city at large. Make sure to bookmark us, and come back soon.