After a decade and a half as a North Beach resident, you can imagine I’ve seen a lot of people come and go. And in a neighborhood like ours, that of course goes for bars and restaurants as well; after all, it’s a transitory business, and change and turnover are endemic to the category. But what has always defined North Beach is our fixtures, our stalwarts—the revered institutions that have soldiered through the decades.

It’s a healthy roster, to be sure: from eateries like Mario’s Bohemian, Sodini’s and North Beach Restaurant to watering holes as diverse as Tony Nik’s, Vesuvio Cafe and The Saloon, North Beach has living history on every street corner. That’s just one reason the rest of San Francisco loves our little neighborhood nearly as much as we do. 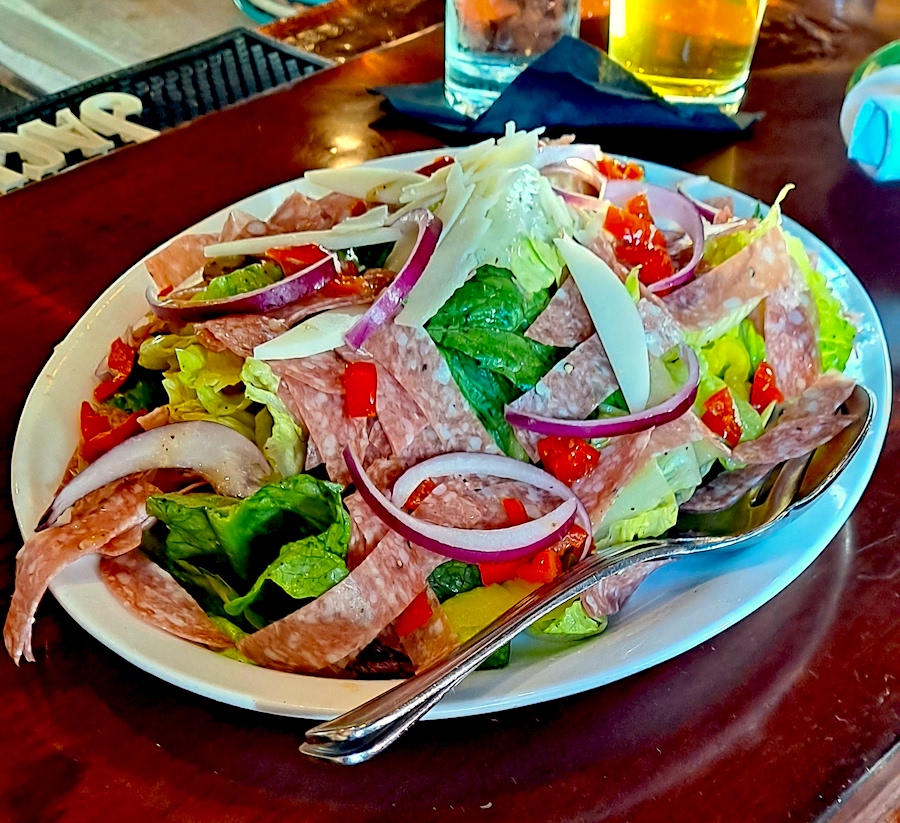 Happily, we’ve also got a new generation of rock-solid restaurants that have opened over the past ten or fifteen years, which are quickly becoming the new North Beach vanguard. While there are plenty of new spots, certainly Sotto Mare, Original Joe’s and Park Tavern top the list—along with Tony’s Pizza Napoletana.

Ironically, one of the reasons Tony’s makes this list is the restaurant’s adamant refusal to stand still. As successful as it has been, Tony’s has consistently changed—and gotten better—over time. No matter how often you visit, there’s always something new on the menu to check out. Despite its thirteen-year tenure, the place somehow manages to bring the excitement of a new restaurant to its diners every day. Perhaps that’s the real secret to their success: Tony’s keeps them guessing.

With that in mind, I stopped in this week to try out a few new items I’d been hearing about (as a public service, naturally).

First on my agenda was the newest insalata on offer, the Italian Chop Salad. A combination of romaine, red onion, Italian salami, mediterranean olives, banana and peppadew peppers, shaved parmigiano, provolone and fresh mozzarella drizzled in a bright vinaigrette, this is one of the better salads I’ve had recently (and I’m particular about my chop salad). It’s easily generous enough to share or just make a meal of, and makes an excellent addition to the starter lineup.

The Double Roasted Garlic Bread with cheese on the the bar at Tony’s Pizza. | Photo: Joe Bonadio

While we’re talking about starters, one of the new items I’ve been meaning to try for a while is Tony’s Double Roasted Garlic Bread. Garlic bread can be pretty forgettable, but when this hit the table, it was clear we were in for something different. Made with Tony’s own sourdough baguette (courtesy of sister establishment Toscano Brothers Bakery just around the corner), this thing comes loaded with whole cloves of roasted  garlic. It’s also served with marinara, agave & garlic, and perhaps best of all, nduja: a spicy, spreadable salami from Calabria. The bread obviously couldn’t be fresher, and the accompaniments are perfect (I’d also recommend you order it with the cheese—it’s delicious). 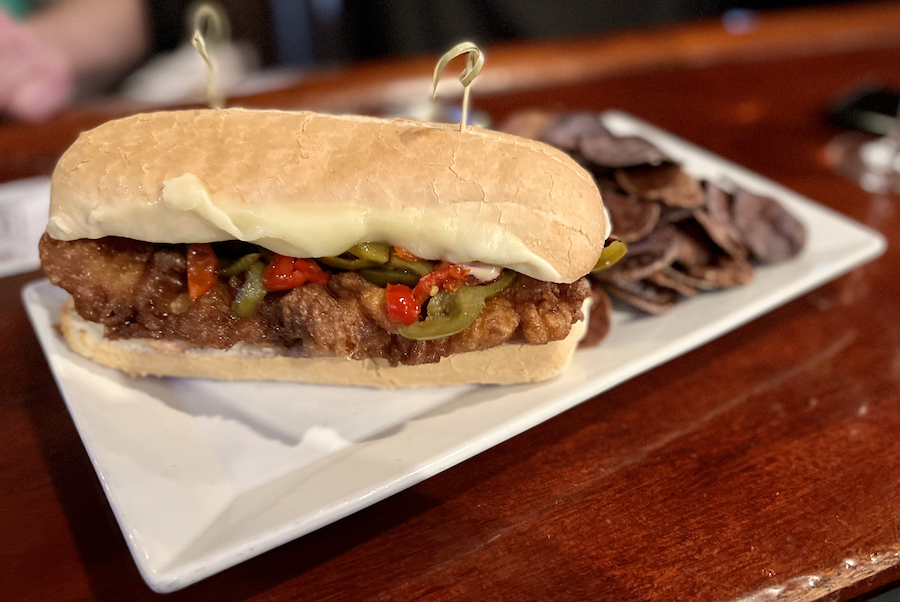 Next up was one of the newest items on the menu, which I heard about through the North Beach grapevine: the Honey Fried Chicken Sandwich. Take heed, this is one monster of a sammie. It comes packed with pickled bell and peppadew peppers, mozzarella, and horseradish aioli, and is finished with a just-right drizzle of honey. Salty, sweet, sour and spicy, this sandwich hits all the right notes, and the crispy batter is pure indulgence. In case you’re ravenous, you can also add Applewood bacon for a couple bucks more. And though I might go with a slightly smaller roll, this sandwich is a must-have for all the pollo lovers out there.

Tony also has some new pizzas on the menu, including a doozy from the coal fire oven: the Gotham. I’m a sucker for a coal fire pie, and this one definitely punches over its weight. Topped with a diabolical combination of Avorio mozzarella, hand crushed tomatoes, thick & thin cup and char pepperoni, Italian sausage, roasted peppers, Applewood bacon and agave garlic, the Gotham is finished with a generous chiffonade of basil. The crust of this pie was spotted with a perfect char, and the toppings were long on flavor, but perfectly balanced. I’ll be eating this pizza again, and soon. 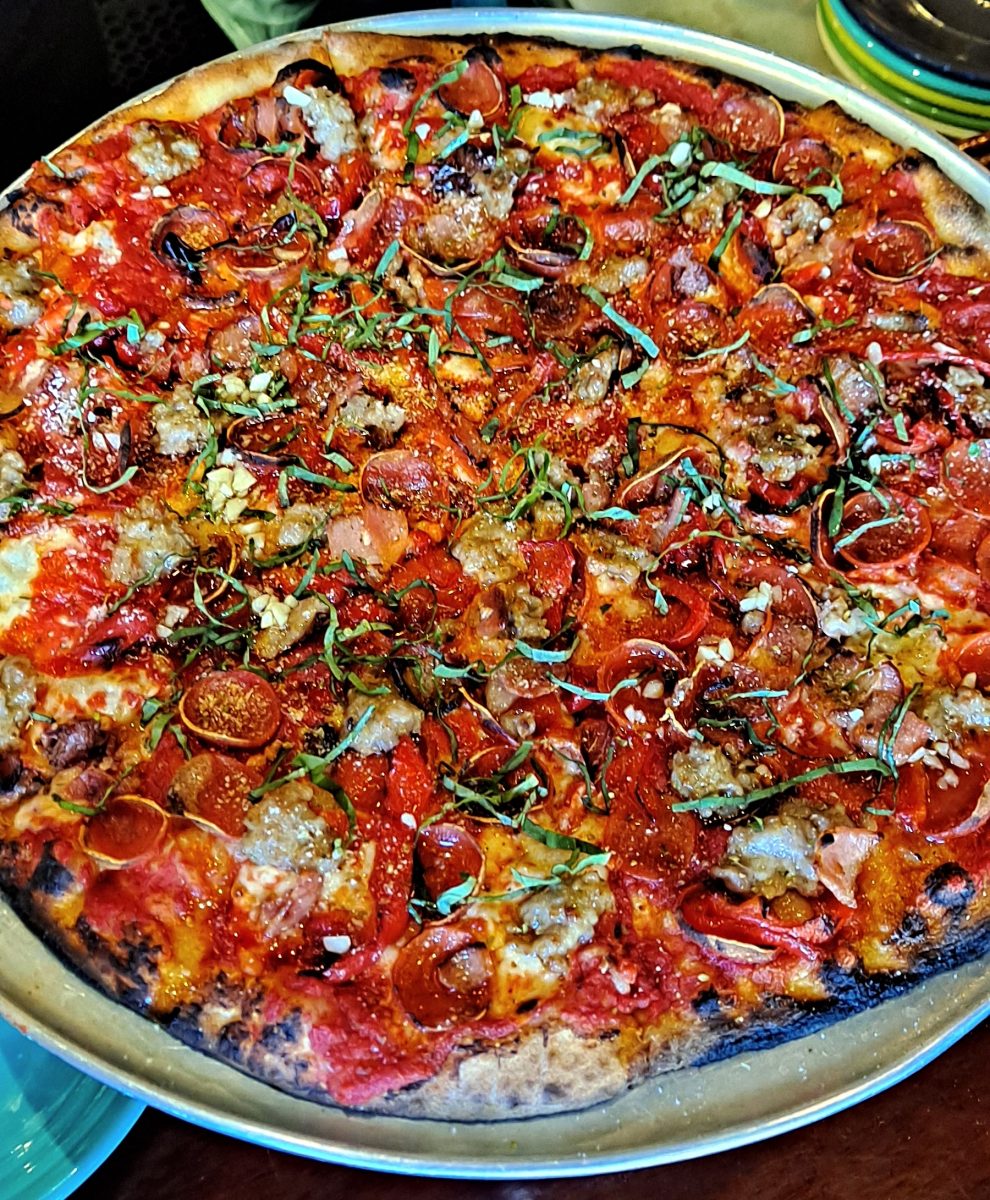 With four kinds of meat, roasted peppers and basil, the Gotham is one of the tastiest coal fire pizzas I’ve ever had. | Photo: Joe Bonadio

There’s another new pie on the wood-fire list, too. As you might expect, the Quattro Carni is a meat-intensive affair, topped with soppressata, hot coppa, genoa salami and prosciutto di Parma. As if that combination weren’t formidable enough, it’s also got arugula, sweety drop peppers, mozzarella and goat cheese. And while I haven’t had the chance to sample this one, I did spy one coming out of the kitchen. It looks like a killer, and it’s on my to-do list. 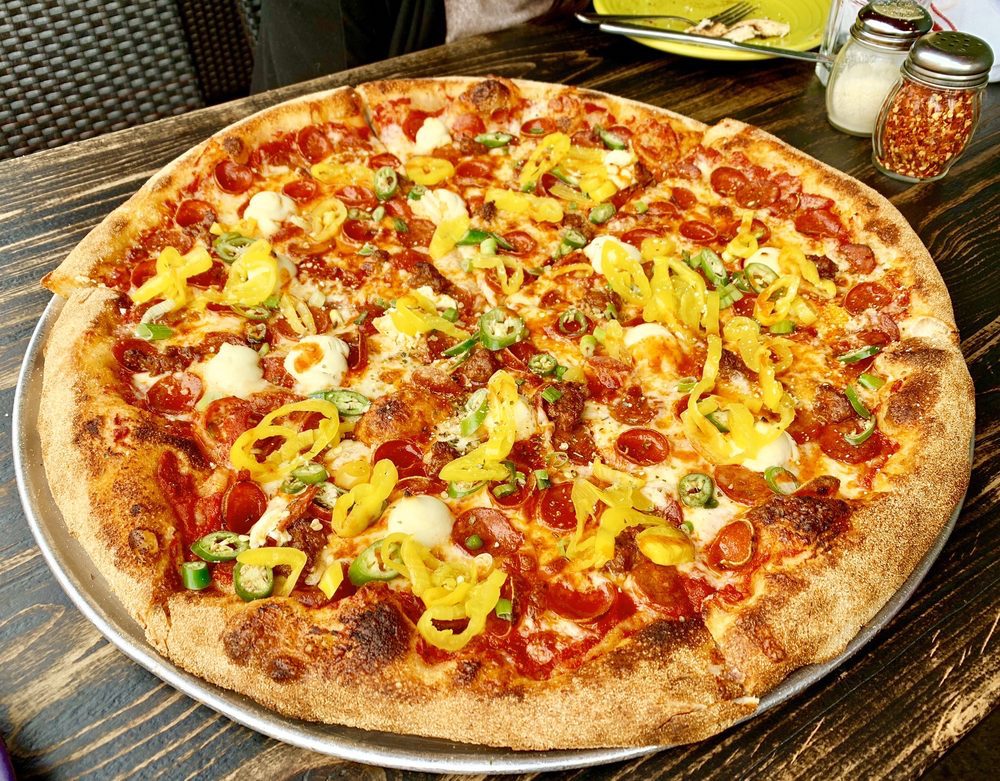 If you like spice, the Piccante at Tony’s Pizza Napoletana might just be your pie. | Photo: John G., Yelp

The last item I’ll talk about is not actually new—it’s just new to me. On a recent visit with baker Adam Sachs, Tony’s partner at the much-ballyhooed Dago Bagel, we ordered the Pizza Piccante. It was Adam’s first choice, and frankly I’m not sure how I’ve missed this pie on the menu for so long (it sits right at the top of the list), but I’m glad I finally found it.

I love a properly spicy pizza, and Tony’s Piccante more than fit the bill. A classic American crust dressed with mozzarella, garlic, pepperoni, linguica, chorizo, Calabrese peppers, serrano & banana peppers, green onions, ricotta and cholula, this pie made me want another one just like it. If you enjoy meat and spice, don’t mull it over: order this pizza.

Get over to Tony’s and try the new lineup, you’ll be happy you did. Thanks for reading, and I’ll see you in the neighborhood!