A few nights ago I was talking with a bartender friend, and we got caught up in a conversation about the calendar. She told me the story of railwayman Moses Cotsworth, who, vexed by his irregular monthly earnings, created a calendar consisting of thirteen 28-day months. Cotsworth’s International Fixed Calendar shoehorned a new month (christened “Sol”) between June and July, and introduced an unnamed “Year Day” which fell on the annum’s final day. Championed by Kodak founder George Eastman, the calendar was used exclusively by his company from 1928 until 1989. Although the 13-month calendar was popular with industrialists, it was unable to attract enough support to gain widespread use. Despite some public interest, the status quo prevailed, and the traditional calendar survived. 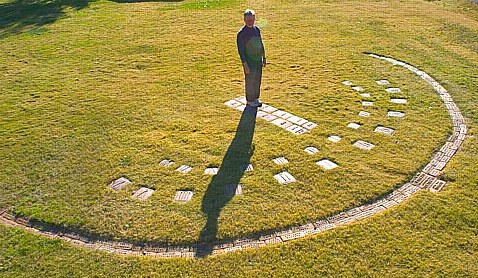 In turn, I told my friend what I knew about the Roman Calendar. The earliest version had no
names for days (Monday, Tuesday etc.), began with the month of March and had only ten months; the two months that fell outside of growing season in the depths of winter appear to
have gone unnamed as well. In early Rome each month followed the lunar cycle, but that eventually gave way to a fixed calendar. Sometime between 600 and 700 BC, January and February were added to the beginning of the calendar year. As a result, to this day, the final four months of the year are misnamed: September, October, November and December are the Roman names for 7, 8, 9 and 10.

Our 24-hour day had a similarly piecemeal origin. Beginning around 2,000 BC, the ancient Egyptians used sundials and mechanical devices to divide the day into ten parts. They added one twilight hour at the start and end of each day, for a total of twelve; reckoning by the stars, they divided the night into twelve equal periods as well. The choice of twelve as a divisor has been attributed to the number of lunar cycles in a year, and more remarkably, to the fact that human beings have twelve finger bones on each hand.

(Whatever the case may be, the number twelve has been historically overrepresented in systems of time and measurement. Beside the 12 hours in a day, there are 12 inches in a foot, 60 minutes (5 x 12) in an hour, and 60 seconds in a minute. Eggs and other items are typically counted by the dozen (or the gross, 12 x 12). There are twelve signs of the zodiac, and twelve days of Christmas. Twelve astronauts have walked on the moon. This can’t all be a coincidence.)

In all seriousness, the conversation got me wondering about all the other things that we accept as inevitable. How many of them began with arbitrary decisions, or long-past determinations that no longer apply to the world we live in?

One of my personal favorites is the 5-day work week. In the 1920’s, Henry Ford switched the schedules at his bustling factories from a 6-day, 48-hour week to a 5-day, 40-hour week. Surprisingly, his decision wasn’t based on productivity or efficiency (he also elected to pay his workers the same wage for less hours). Instead, Ford did it to sell more cars. As the industrialist explained the change at the time: “Leisure is an indispensable ingredient in a growing consumer market because working people need to have enough free time to find uses for consumer products, including automobiles.” Canny fellow, Ford.

His idea caught on, and since that time the 5-day work week (and its attendant terms “weekday” and “weekend”) has become a standard feature of life in America, and elsewhere. So much so, in fact, that it actually affects the weather. That’s right. Did you ever notice that it seems to rain more on the weekends? You might have dismissed the thought, chalking it up to randomness or selective memory. Turns out you may have been on to something, especially if you live in the Northeast US: because so many cars commute on the weekdays, the likelihood of coastal precipitation begins to spike on Thursday, and increases through the weekend. Because pollution patterns map closely to recorded rainfall, the presumed culprit is the cloud-seeding effect created by all that vehicle exhaust. So, the 5-day work week – a custom that is nothing but an invention of the human mind, and corresponds to almost nothing in the physical world – has a regular effect on weekly weather patterns.

Of course, this discussion would be incomplete without mention of the second: in the denotation of time, the first unit of measure. That being the case, why is it called the second? Get ready. By definition, the minute is the “first division of the hour by sixty” (1 hour ÷ 60 = 1 minute). That makes the second the second division of the hour by sixty. Thus, the second. (No, I’m not making this up.) The regular use of the English word began in the 16th century, and its meaning remained unchanged until 1960. At that point, the advent of science demanded a clearer definition. Here it is: “the fraction 1/31,556,925.9747 of the tropical year for 1900 January 0 at 12 hours ephemeris time.” Alrighty, then.

As concrete as they may seem, upon close examination these ostensibly permanent features of our world turn out to be nebulous: the products of a shared consensus, mapping to little in our material world. It’s a healthy reminder. So many of the things we view as inevitable are nothing but the product of choices made so long ago that we’ve stopped questioning their legitimacy; choices that are so calcified that we accept them as permanent features of our reality. We’d all be well served to look beyond the calendar, the clock and the 5-day work week, and to question all the things we take for granted – our social norms, customs and political systems among them. In truth, many of them could have turned out in any number of different ways.