As much as any neighborhood in San Francisco, North Beach has undergone vast, often disruptive changes over the years. Between soaring rents and bust-and-boom business cycles, we’ve seen it all here. Despite all that, when you talk to locals about North Beach, their affection for the neighborhood is as clear as ever: North Beachers love where they live. 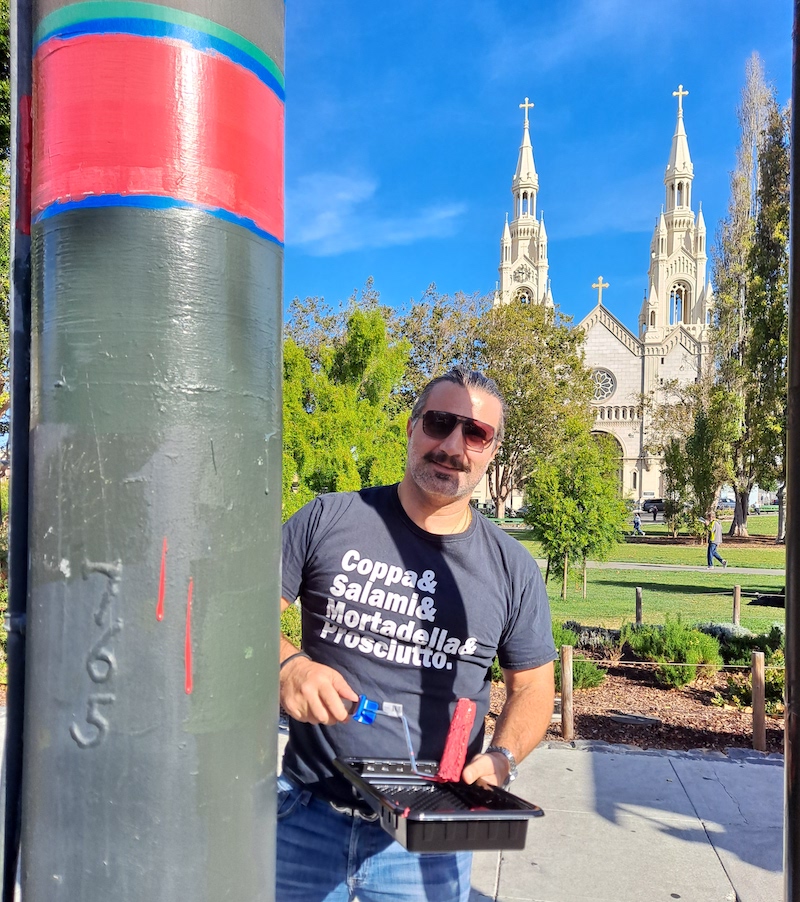 There are obviously a lot of reasons for this, and just one of them is the sense of tradition that is baked into the place. Whether you find it in a brisk morning walk through 175-year-old Washington Square Park, or a strong coffee from a local barista enjoyed on a park bench beneath the soaring spires of Saints Peter & Paul Church, the sense of continuity and commonality permeates North Beach. In a place as wrought by change as San Francisco has been, these things have become an invaluable consolation for those who call the city home.

When it comes to tradition, the San Francisco Italian Athletic Club (SFIAC) has been one of the neighborhood’s most dedicated keepers of the faith. I’ve written here about their recent event series focusing on the Friuli Venezia Giulia region of Italy, and the 100th running of North Beach’s historic Statuto Race, which took place last month. 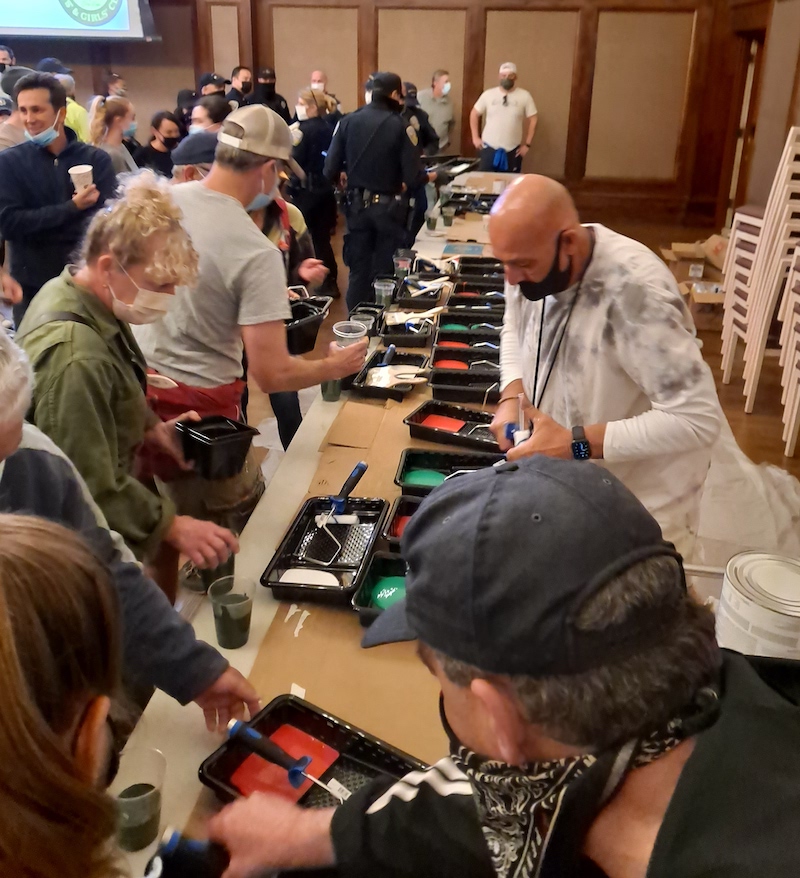 The SFIAC is all about community, respect for Italian tradition–and of course, keeping North Beach Italian. With that in mind, the social club recently took on a big project, and if you live here, it’s one you may have already noticed: the repainting of the Italian colors, or tricolore, on utility poles across the neighborhood. The newly reinvigorated SFIAC Foundation sponsored the project, providing logistics, paint and supplies. The foundation sponsors all of the club’s public-facing events, in keeping with its leadership role in supporting Italian culture in North Beach and citywide.

As one of the most obvious visual cues delineating North Beach as a distinct neighborhood, the Italian colors have long been a point of pride for the community, Italians and non-Italians alike. They also serve as historical signposts for our visitors, who often come to the city unaware of our neighborhood’s rich culture and history. 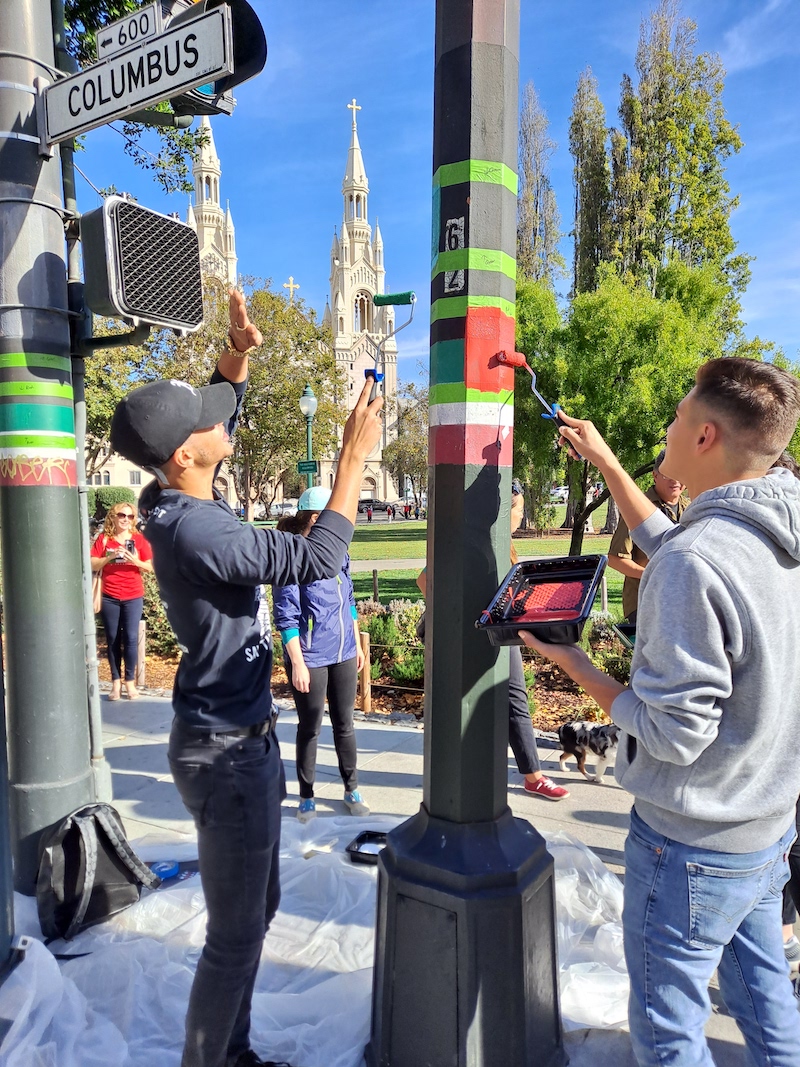 Interns from Supervisor Peskin’s office showed up bright and early for the event. | Photo: Joe Bonadio

That being said, it had been years since the posts had been repainted, and they were more than due for a refresh. This was no small job, however; there were fully 107 poles that required painting, and it was clearly going to take a group effort to get it done.

Enter Nick Figone and his gang of intrepid volunteers at the SFIAC. On the sunny morning of September 29th, nearly fifty of them donned their dingiest dungarees, rolled up their sleeves and got to work.

Randy DeMartini, Executive Director at the Salesian Boys & Girls Club, worked closely with Nick at every step of the project. “I’m just so grateful for all of the support we received from the  community,” he told me on the day of the event. “To have so many people from Central Station come out, and Supervisor Peskin and his staff, and so many of our neighbors out here, it’s just terrific. Captain Julian Ng came out with us, and I ended up painting poles with him.” 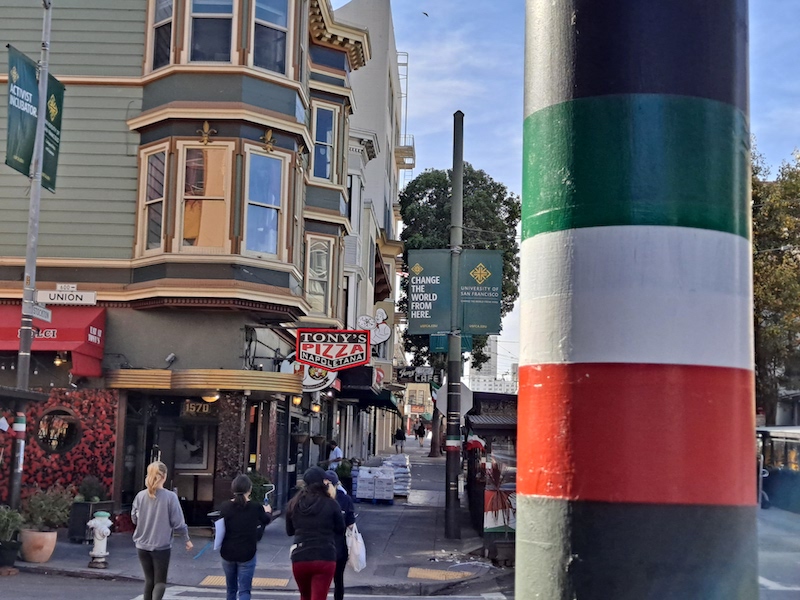 The Italian colors, or Tricolore, have marked the boundaries of North Beach for many years. | Photo: Joe Bonadio

When I spoke to Supervisor Aaron Peskin about it, he seemed gratified the project was finally over the finish line. “You’d think something like this would be a slam-dunk,” he said. “But Randy and Nick came up with this idea just before the pandemic. So we’ve been getting ready to do this for nearly two years.

“Hats off to my staff and Sunny Angulo who got all the appropriate permissions from city agencies, and the almost 50 people who showed up this morning to bang it out,” Peskin continued. “Their work is going to help return a sense of place to North Beach.”