Living in San Francisco’s North Beach, I’m fortunate to meet creative people of all kinds. It’s one of the best things about this neighborhood: it’s a hothouse of artistic energy, and an enduring inspiration for people all over the world. That being said, as a writer my work is often solitary, and I don’t get the chance to talk much about the creative process itself.

My recent interview with Aaron Lane was a fascinating exception to the rule. A local painter working out of a basement studio beneath North Beach’s Real Old Paper Gallery, Lane is about to launch an aggressive exhibition of new work. Entitled Drift, the exhibit marks a steep departure for the artist, one with roots in deep personal transformation. In our talk, Lane shed light on some of his inspirations, and the evolution of his work and creative habits. Our conversation is below.

Joe Bonadio: How did you first get into creating art?

Aaron Lane: Well….I was anti-art. And then some friends died in a car accident when I was supposed to be with them. There was a realization afterward that I got lucky—and that changed my life.

So I went to a Payless in Oregon, and bought a pad of paper and some pens. I figured that I needed to do something in my life where I’m not in that situation anymore. I literally came up with a new way of looking at things.

I did a memorial drawing for those guys, and I sold it within a few weeks. I was like ‘I can do this.’ I just started buying colored pencils and pens, and then took an art class in high school—and that was pretty much it. 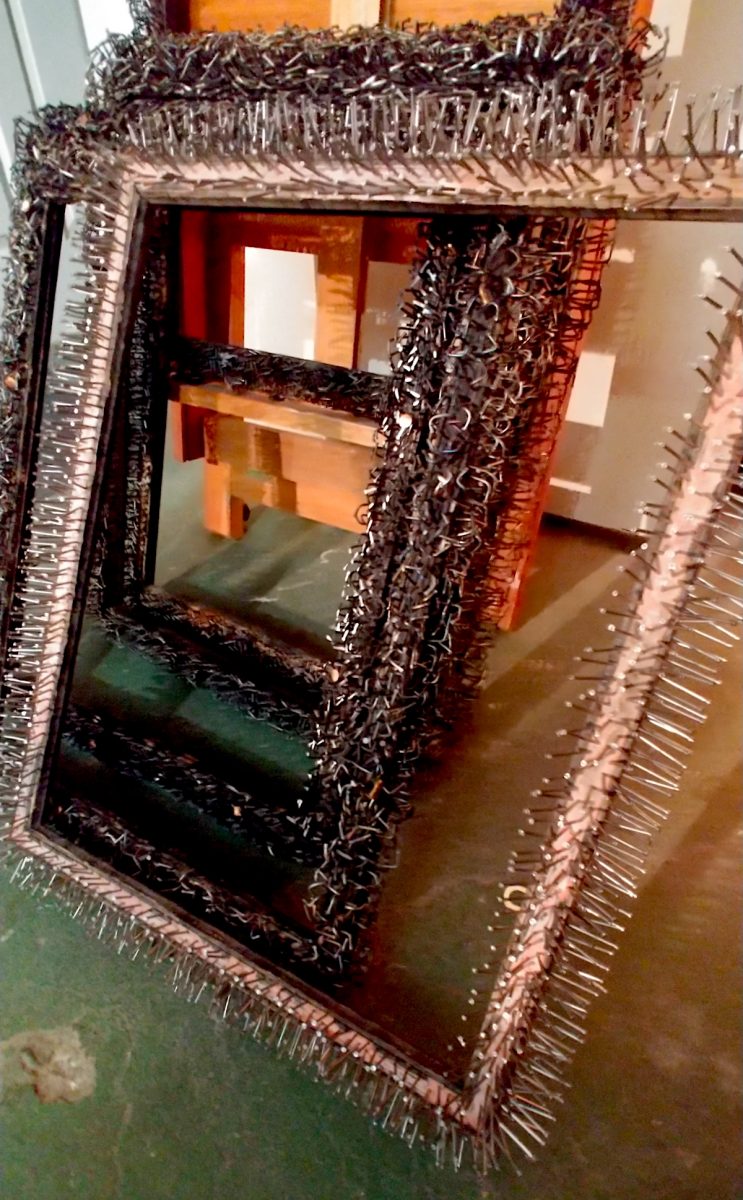 JB: Your artwork has recently undergone a stark transformation, and there’s a story behind it.

AL: Yes. I had apprenticed with an artist in France by the name of Nall, and he was all about detail. He had been a student of Salvador Dali, so it was all focused on detail. Real live models, and discipline.

In 2017, I was assaulted over in Oakland. That left me with a torn and broken right shoulder, and I needed reconstructive surgery. I needed facial reconstruction, and suffered some brain damage as well.

In order to get back into painting, I decided to start working left-handed—because of a Julian Schnabel documentary, actually. I looked at his work, and how aggressive and assertive he was with atypical painting objects: like dipping a sheet in paint, and then just throwing it across huge canvases.

I realized I needed to rethink my idea of what painting is. Where I used to think it meant the classically trained, skilled application of a certain style….now I only had my left hand, and sort of a different brain to deal with.

So I just started throwing paint, and being the opposite of what I thought a painter was. And now I’m having way more fun, and I’m selling more than I was before. It’s definitely something I want to keep pursuing. The French call it plasticité—the plastic, flexible side of art, the emotional, abstract, expressionist side. 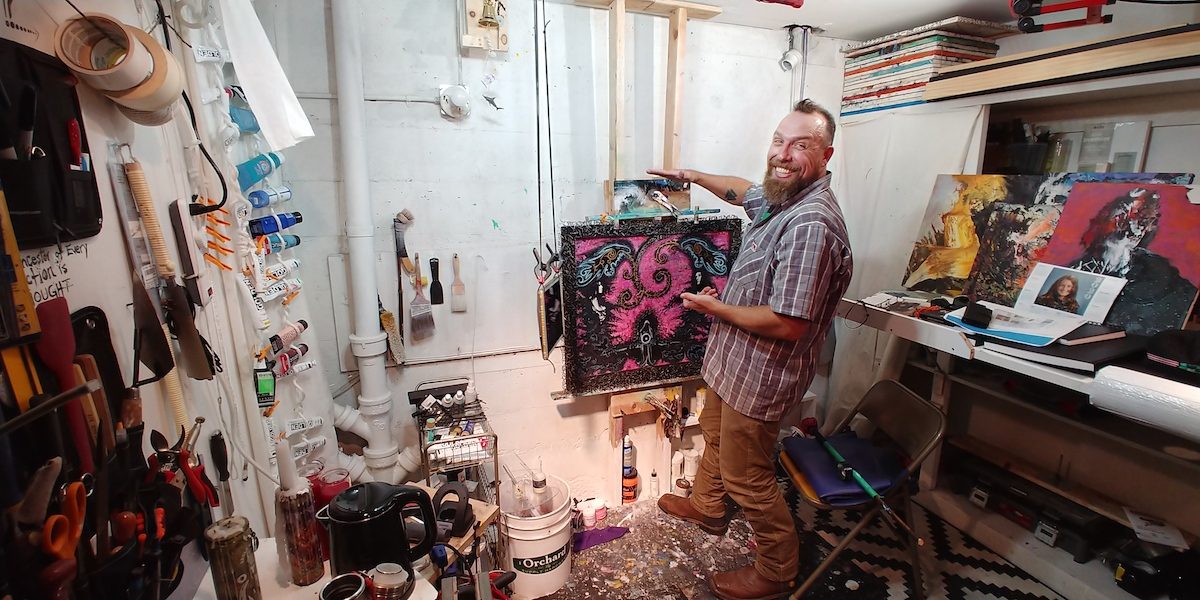 JB: You came away from the assault in Oakland with some serious injuries, but you also ended up suffering from depression. How has that influenced your work?

AL: Well….you feel like you’re wrapped up in rubber, and trying to run a marathon. You feel constricted by the depression. And it’s so easy to talk yourself out of painting: I want to do it, but I’m not gonna get to it.

I came to the point where a new voice emerged, and I witnessed myself negating myself. I had to put that person in the corner, and let him complain, and be tired and negative. I just put it aside, and kind of just kept plugging through it.

Ideally, once you get working on a painting, once you mix the paint and start applying it, it’s like riding the tiger. You just start going, and then it goes on its own—and then you feel better. It’s kind of like surfing. You’ve got to put on your wetsuit, and then you’ve got to walk down to the water…..but as soon as you’re in the water, you’re like fuck, yeah.

Meanwhile, while I’m painting I’ll fall into these dark holes, thinking none of this matters, no one’s ever going to like it. I can’t make a living off of this, I’ve got to figure out something else.

So when someone comes along and they are very encouraging and supporting, buying and appreciating my work, that’s pretty groovy.

JB: You’re sort of a jack of all trades: you’ve been a crabber, a fisherman, and a builder, among other things.

AL: I also tied flies for a living. That was one of my first instances of constructing something creatively. And when you catch a fish, that’s like selling a piece—they liked it!

While I was a crabber, I would draw when we were out on the water, when we were running between strings. I ended up with a reputation as the artist-crabber weirdo guy. But people dug it.

One of the things I learned in France is that the artistic work–whether it’s a painting, a sculpture or whatever you do—is only the residue of the creative process. The artistic process starts with seeing–there’s a quote right there on the wall: “The ancestor of every creative action is thought.”

JB: You’ve done a lot of physical work over the course of your career. How much does that have to do with your work being more physical now?

AL: Despite all I just said, I’ve always had a problem defining myself inside my head as a working artist. I was creative and artistic, but I figured work was hauling in 120-pound crab pots, and building houses in the rain. Meetings, and offices, and suits. That’s work.

Whereas now, in this new physical condition, and cerebral and mental condition, I can’t do all that stuff. So I’ve had to redefine what work is—and I definitely bring the elements from all of the hardcore labor I used to do into the paintings. Particularly all these nails, and the grinders. I make my own frames with a table saw, and I use a router to channel out the back to fit the canvas in.

So from thought to finished product on the wall in the gallery, I build all of it.

And the nails are very specifically symbolic. I’ve seen guys put nails through their hands, and a nail is a thing that can fuck you up pretty quickly. I wanted to use that as meditation on taking something that has fucked you up—and working it.

I hammer in about 3-4,000 nails per frame. Then I bend them, and burn them with a propane torch. That anodizes the nails and gives the metal color, and blackens and chars the wood. So you get this cool matte burnt surface set off by the shiny colored finish of the metal. And then I use a grinder on top of it all.

When you’re hammering in 3,000 nails, you’re meditating on some shit. 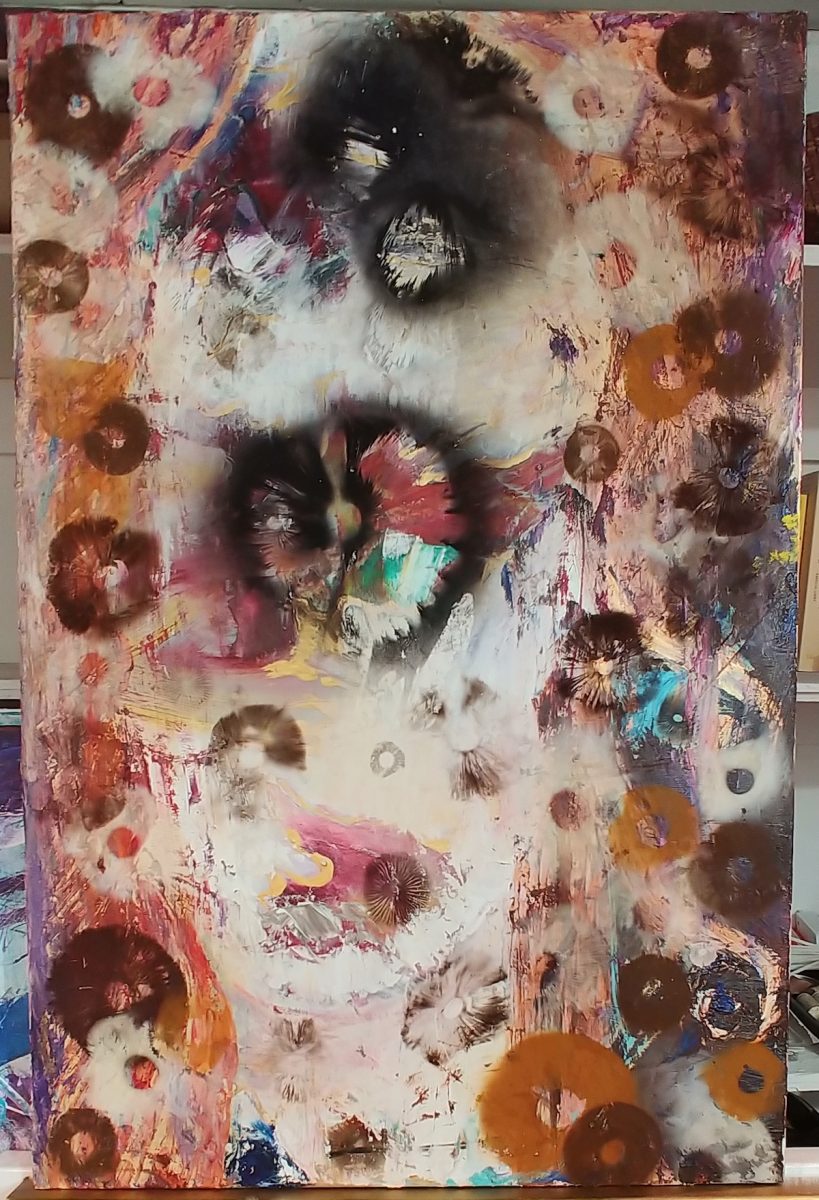 AL: It’s hard work, and it’s repetitive. I think it was Gandhi who said when the hands are busy, the mind is able to really flow. When my hands are busy, I’m more fluent in my thoughts, and less distracted.

JB: How much has this transformation in your art changed the way that you experience the creative process?

AL: I actually appreciate it more now. Imagine a singer, a studio musician or backup singer. You have to do the same thing every time, and there is an expectation of a specific result. You’re still a singer, and you’re singing and being creative—but it gets tedious.

With this newer style, and by changing my concepts of work, I’m having more fun. Fun and joy are my ultimate goals in life. That’s what makes me keep moving, and gives me reasons to keep going after that carrot—it’s not about getting the carrot, it’s about enjoying the process.

Jack White from The White Stripes talks about the creative process in this way: You’ve got to look at the project you want to do, and pick a fight with it. And it’s going to punch you in the nuts! It’s going to fight back. But as long as you win, you’re going to make some great work.

I feel like that every time I start painting: things are going great, and then ‘Oh shit, I fucked it up!’ That means it just punched back. But I didn’t fuck it up, that was just a gift (laughs) to move in the next direction. You can’t have so much ego that you get attached to what you thought was good. You have to be willing to move on to the next magical note you might hit, by exploring something different.

JB: I’m looking forward to seeing the show. Are you a planning an event for the opening?

AL: The event is planned! ’Tis written in stone! It’s happening Friday, November 1st, and it’s part of the First Fridays shindig all around North Beach. It runs from 6:00-9:00 P.M., and there will be some sniper musicians on hand.

AL: You’ll see. Meanwhile, it will be a classic reception with hors d’oeuvres, wine and beer. Also, every time I sell a piece, the tradition in the gallery is that I ride my unicycle one lap around the gallery. Then I apply a red dot to the piece with the new owner, indicating it was sold.

Again, the fun starts at 6:00 pm on Friday, November 1st, so mark your calendar for what’s sure to be a local art event to remember. We’ll see you at Real Old Paper Gallery! 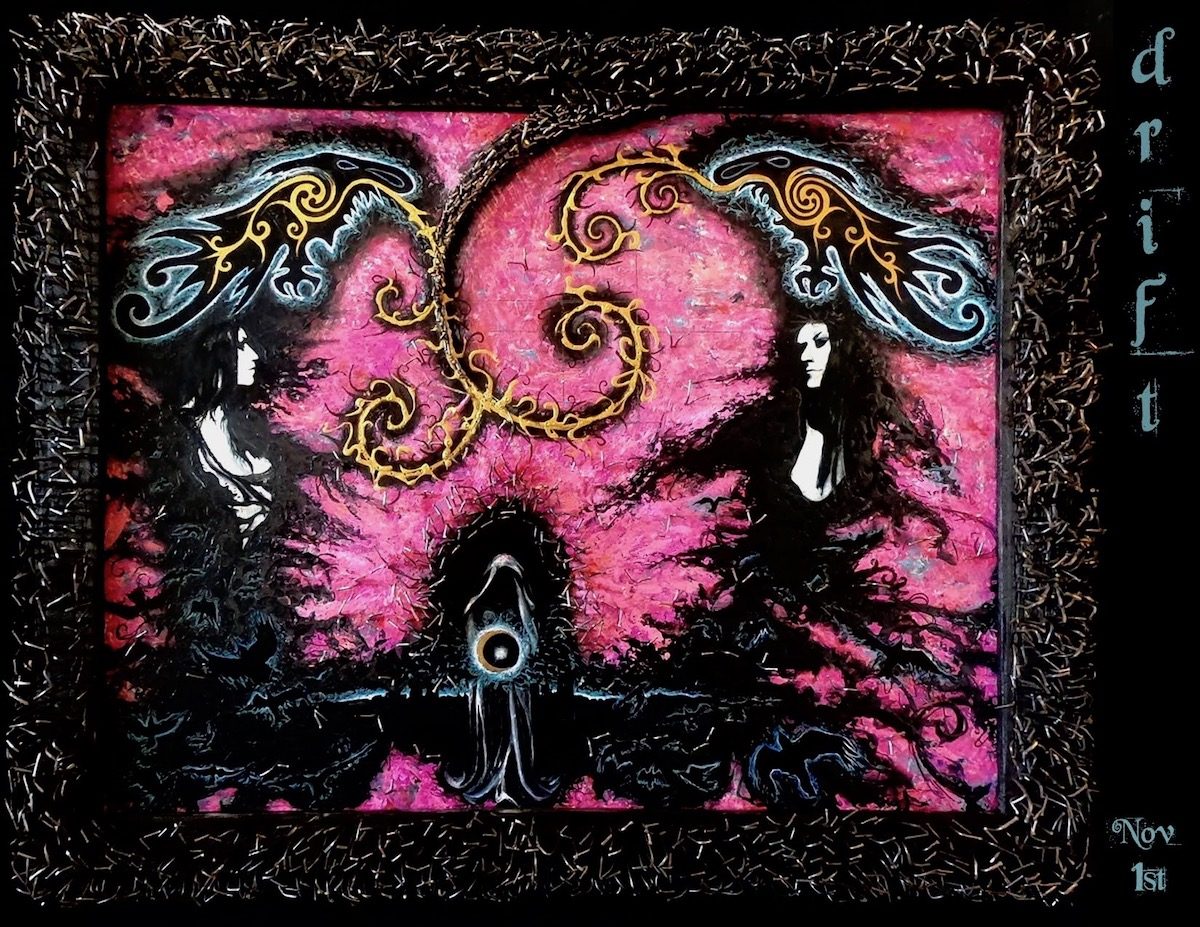