It’s a fact of life in North Beach: as many restaurant options as we have, Mexican has always been something of an underrepresented category here. Of course, some of that can be explained by the Italian dint of things in North Beach–and the proximity of Chinatown, which makes Chinese food the cheap-and-easy cuisine of choice for many. But in a city well larded (forgive me) with quality taquerias, North Beach has typically gotten by with one or two.

Hence our collective joy at the arrival of Panuchos on Broadway in late 2016. Juventino Carrillo’s tiny Yucatecan taqueria was a fresh surprise: a taco shop on steroids open until the wee hours of the morning, it quickly got the attention of North Beach locals. Standout items like the freshly prepared empanadas and eponymous panuchos distinguished their outsized menu from the standard Mission fare, and Panuchos quickly became known as one of the best little taquerias in the city.

Unfortunately, we lost Panuchos in July. Nonstop construction on Broadway didn’t allow the new owners to build enough momentum, and they finally gave up the spot to focus on their other restaurant: Los Mayas, located on Fourth and Clement Streets in the Avenues. 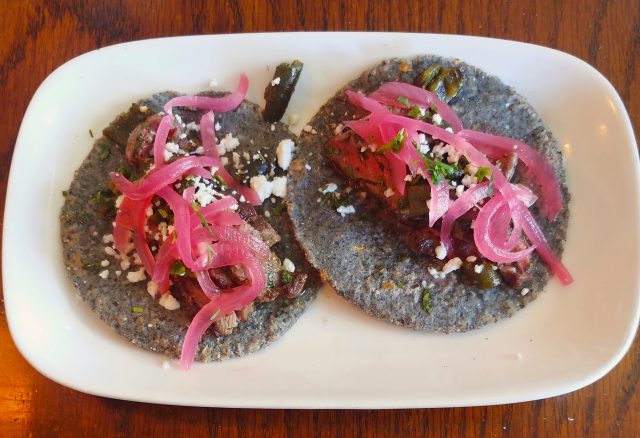 But nonetheless, we still have two reasons to celebrate: Los Mayas is serving up a bigger, even better menu (including a fantastic brunch on weekends) just a couple of miles to the west. And just in the nick of time, newcomer Barrio has arrived in North Beach to fill the Mexican food void.

Opening just last month in the former Boardroom space on Powell and Green Streets, Barrio offers another take on Yucatan cuisine–different, but no less authentic. They stepped into the space when Boardroom migrated to the old Capp’s Corner across the street, and like their predecessor, Barrio still revolves around the bar. With their varied, not-so-typical selection of craft beer and wine, they are already attracting many of the same locals that have gravitated to this spot for years. (Notably, their new space was actually the original location of Capp’s before they took the space across the street to become Capp’s Corner).

Barrio starts out on the right note by choosing to grind their own carefully sourced Oaxacan blue corn. The grind imparts a slightly rougher texture to the masa, giving the tortillas a rustic bite and intense corn flavor–and resulting in excellent tacos. I’ve tried two types: the traditional cochinita pibil (pork slow-cooked in banana leaves) was rich and subtly spiced, and the skirt steak perfectly tender and redolent of the grill.

They are also serving an item I’ve never seen: Quekas, which are essentially corn quesadillas. These are tasty and deceptively filling, but like all of the menu, best eaten while hot and fresh. Everything I’ve tried so far is delicious (including the fresh guacamole, always a bellwether for me), and perfectly sized for the bar. The menu is limited for now, but owner Billy Riordan and partner/chef Tim Milojevich plan to expand the food offerings over time, so definitely check it out.

Meanwhile, Panuchos fans take heed: their talented team of chefs continues to kick ass, now exclusively at Los Mayas on Clement Street. They miss North Beach, though–and they just love visitors. I can vouch for this firsthand, having just enjoyed a showstopper of a brunch there last week.

It was my first time trying their signature eggs dish: Huevos Motulénos, an elaborate combination of sunny side up eggs layered with freshly griddled masa, covered in a deeply flavorful sauce and topped with a handful of spicy chorizo. With no exaggeration, this was easily the best breakfast dish of any kind I have eaten in years. “Yeah, that one’s my favorite,” Carrillo told me afterward, smiling. “No one else in the city makes it like this.”

Keep in mind, brunch is only served from 11:00 until 3:00 on weekends. But they’re serving up a full menu Tuesday through Sunday–and yes, that includes all of your favorites from Panuchos.

So let’s not waste any time. To conduct your very own Yucatecan compare and contrast, I suggest you check out both of these places straightaway. And for a little extra karma with your order, make sure to tell them Joe Content sent you. See you in the neighborhood….and buen provecho.