North Beach is truly its own creature. As the center of our collective history in San Francisco, North Beach (or the Barbary Coast, as this patch was long known) somehow enjoys a sort of cloistered existence, even today. Travelers typically stumble upon it when walking back to their downtown hotels from Fisherman’s Wharf, or after taking a wrong turn in Chinatown. 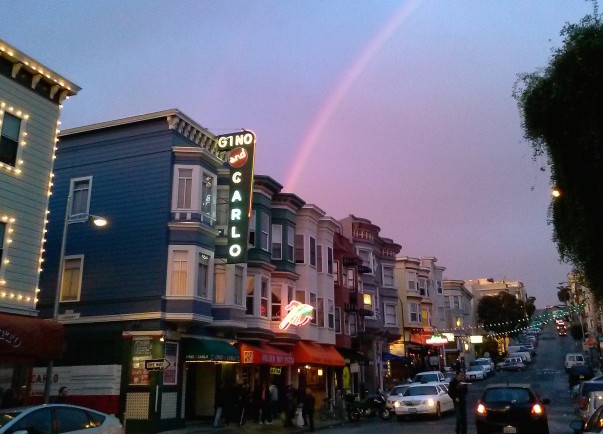 North Beach: a neighborhood like no other. | Photo: Joe Bonadio

There are a lot of reasons for this, the lack of a simple, saleable identity for the neighborhood being one of them. The strip clubs and steady-state sleaze of Broadway have nothing to do with the old school Italian cafés and upscale wine bars a couple of blocks north. Likewise, the musicians and other creative types who gravitate to Grant Avenue near the Saloon and Caffé Trieste hearken back to the Beats and the bohemians, but tourists seeking that narrative usually head to the Haight.

Not to say there isn’t plenty of destination traffic for the Beach. The travel guides are still pushing the ‘Little Italy’ trope, despite the fact we’ve never used that name (though North Beach was called ‘Little City’ for a spell). And though it’s only one part of our legacy, the Italian-American nostalgia still lingers.

You’ve probably seen him: African-American guy in his 40’s or early 50’s, modestly dressed. He walks in the area around Washington Square Park quite a lot, mostly keeps to himself. OK, that’s understating it a bit; I’ve actually never heard him utter a word. I’ve also never seen him without his constant companion: a white noise generator, turned full blast.

If you’ve never seen one of these, it’s a device that produces a wall of white noise–static, essentially–to block out background noise, typically as a sleeping aid. On these chaotic streets, it took me a while to realize that’s what I was looking at. Why would someone need such a thing amid the cacophony of Columbus Avenue on a business day? I guess the first couple of times, I just assumed his radio was busted.

These devices are pretty widely used for sleep, but upon investigating I found that there is another use: the treatment of tinnitus, a chronic ringing in the ears that affects 10-15 percent of the population. For 1-2 percent of us, it’s enough to interfere with normal daily function, which likely explains what our man is doing with the noisebox. Hey, whatever floats your boat.

Interesting fact: though tinnitus typically involves noises in the absence of auditory impulses, there is a rare subset of the condition called objective tinnitus. Its sufferers hear noises inside the ear that are real–and can actually be detected with a stethoscope. Just imagine trying to convince the doctor of that.

That mystery seemingly solved, we’ll move on to…

If you live here, chances are you’ve run across him. He walks a route through North Beach that varies, but currently goes directly beneath my window on Mason Street. As he walks, he speaks loudly in short, barely decipherable sentences, using a strange, immediately identifiable monotone. He has a certain cadence and key that never changes, akin to a carnival barker. And yes, he is actually talking about (or at least name-checking) Joe Biden. 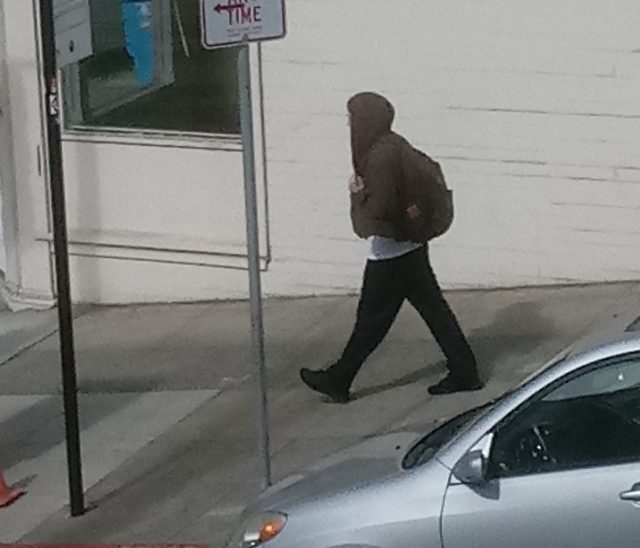 You need to listen closely, but it’s true: most of the guy’s pronouncements begin with a clipped “Joe Biden.” For whatever reason, our former V.P. is star of this particular show.

The Joe Biden Guy (JBG) has gotten a fair bit of attention, and someone has even posted a video of him in action on YouTube. There is also a pretty contentious Reddit thread about him, in case you are having trouble sleeping. Also: look into white noise generators.

Of course, people on the internet have far too much time on their hands, and curious souls have uncovered the fact that the JBG actually has a job he reports to every day (which is likely to account for his behavior, but that’s another article). Meanwhile, for me his rants have become just another aural signature of the neighborhood, alongside the wild parrots, foghorns and church bells. Rage on, JBG.

We’ll conclude with one of the oddest shopkeepers in North Beach (no small accomplishment, that):

I first encountered the proprietor of M Clothing & Accessories at her shop on Grant Avenue eight or nine years ago, while my late mother was visiting from Maui. A collector with a keen eye, mom never missed an opportunity to drag me around to the estate sales, flea markets and shops. One morning after a leisurely coffee at Trieste, we happened upon an odd little shop just up Grant. It was tiny, just the kind of place that appealed to her, and we stepped inside to look around.

The first thing I noticed was the insane disorder. The space had been jammed with three or four times as much merchandise as it might reasonably hold, all of it thrown together topsy-turvy and without care. 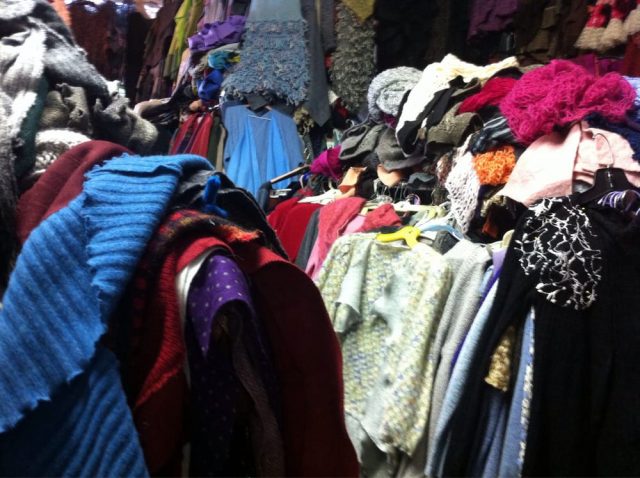 A glimpse of the organizational scheme at M Clothing. | Photo: Melissa M./Yelp

Then it got worse. My mother started to inspect something that caught her eye, and the woman reared up as if she had been slapped. “Do not touch!” she snarled. “If you want to see something, I will show it to you.” Mom just stared at the woman wide-eyed, looked at me, and walked out the door.

I brushed the experience off, and hadn’t thought about it again until a friend mentioned the Sweater Lady when I was telling her about my plans for this article. She described this character who had a shop on Grant where she wouldn’t let anyone touch the clothing. That’s when it clicked: this was the same woman who had verbally accosted my dear mom so many years ago. My god, this battleaxe was still in business!

In case you think I might be exaggerating, a quick look at M’s Yelp page should clear that up. Even in this hypercritical age, it’s a stirring read. I won’t ruin it for you, but one terrorized patron actually refers to Miss M as “Renfield’s syphilitic mother.”

In the interest of balance, the woman reportedly makes much of her own clothing. And according to sources with a great deal more patience than I, her work is quite nice. All I can say is, I certainly hope so.

Here at Joe Content, we write regularly about the punchbowl of California culture that is North Beach, among other fascinating things. Come back soon for more.