It’s time again for North Beach Fix, our semi-regular compendium of significant happenings, sundry occurrences and notable non-events here in The Beach. We’ve been quiet at the Fix for a while, so let’s get started.

As we slide into November, it appears Indian Summer is loosening its grip on Northern California. October was a bear, though: fueled by the relentless Diablo winds, fires crisscrossed California, causing more destruction than the state has ever seen. It’s enormously sad for our neighbors who were affected by these fires, and our thoughts and prayers are with them. For a few ways to help, see this piece from the Los Angeles Times. 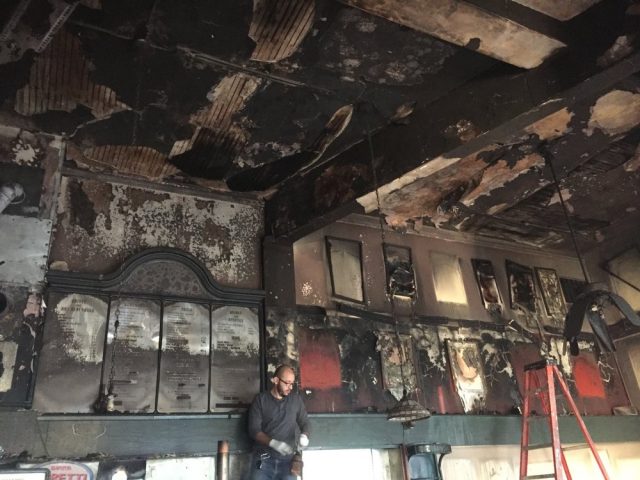 Other than having to breathe some truly rank air, here in the Beach we were spared. Like most of San Francisco, our lives here were largely unaffected, and at times this fact seemed almost surreal. We are fortunate indeed.

Most of us, that is. The owners of Caffe Puccini awoke on the morning of October 10th to news that fire had gutted their decades-old restaurant at 411 Columbus Avenue. According to Giovanni Zocca, longtime owner of Pinocchio next door, the blaze was the result of something left on the stove overnight. It’s a tough break for one of the older cafés in the neighborhood. No word on whether the location will reopen, though it is currently listed on Google as “permanently closed.”

Next, a respectful fare-thee-well to Columbus coffee den Caffe Roma: after 20 years, siblings Irene and Tony Azzolini abruptly decided to give up their well-worn café, serving their last cup of joe on September 30th. Rising rents and other commitments are to blame, and they will continue to operate their locations in SoMa and Millbrae. Meanwhile, slated new owners Jason and Sirin Talbot (the team behind The Bazaar food market on Polk Street) have already departed after an aborted takeover. More news to come.

It also looks like it might be curtains for Caffe Spuntino, the sandwiches and pastry shop that replaced the old La Boulange on Columbus last year. As of yesterday the doors are closed, and it looks as if they are cleaning the space out. Not good news for this benighted stretch of Columbus, which has seen too many vacancies. 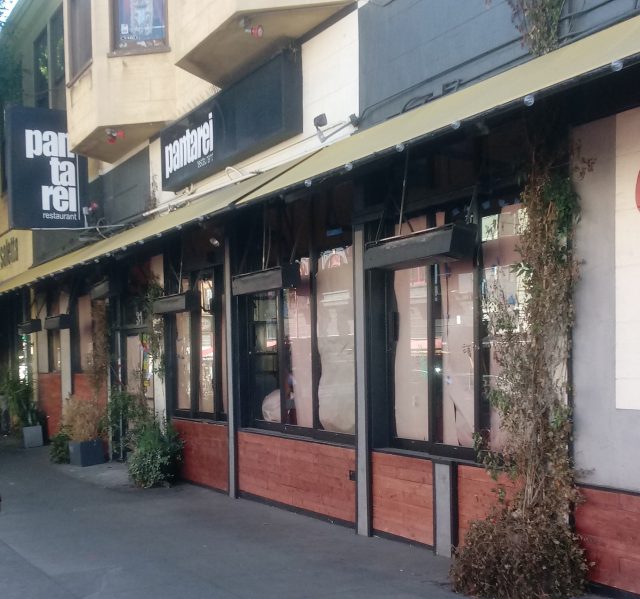 In sunnier news, just up the block, longtime corner tenant Panta Rei (which had quietly been on the auction block for some time), was purchased by Francesco Covucci and partner Peter Fazio. Covucci is no stranger to the Beach: he already has two Italian restaurants within a block of the new spot: Il Casaro and Vicoletto. Covucci has been busy of late, and he’s in the midst of opening a second Il Casaro location on Church Street, just below Market. He’s been somewhat tight-lipped on the concept for the former Panta Rei space, but the liquor license application lists ‘The Dough Room’ as DBA, so it’s a safe bet there will be pizza involved. I do hope so. More info to come.

Over at Powell and Columbus, construction at the old Pagoda Theater site, now rechristened the Palace at Washington Square, continues apace. Just a couple of doors down, we have yet another turnover at the old Washbag: The Square, which opened to tepid reviews in early 2014 before restyling as a dive bar, has succumbed to the neighborhood’s collective disinterest. Taking its place will be Lillie Coit’s, a new restaurant project from Nick Floulis of Chubby Noodle and his partners Elmer Mejicanos and John Paul Jacques (both formerly of Tony’s Pizza Napoletana). First though, the space will be transformed into a Christmas-themed cocktail pop-up called Deck The Halls. Due November 24th, the project is a collaboration between Floulis and friends Ken Luciano (Wildhawk) and Shaher Misif (Cantina), and promises to be a nostalgic, steeped-in-the-season cocktail experience. It’s only operating until New Year’s though, so step lively.

Other openings abound: the pricey, hotly anticipated Eight Tables by George Chen debuted inside of Broadway’s China Live at the beginning of this month (see our review of China Live here). Expectations are high, and we still await the first wave of serious food press. Meanwhile, The Salzburg, the Austrian wine bar and café from the clever couple behind Grant Avenue’s Little Vine and Russian Hill’s Union Larder, has also opened its doors on Union Street. I’ll be reporting back on The Salzburg next week, and on Eight Tables once I can arrange a collateralized loan. 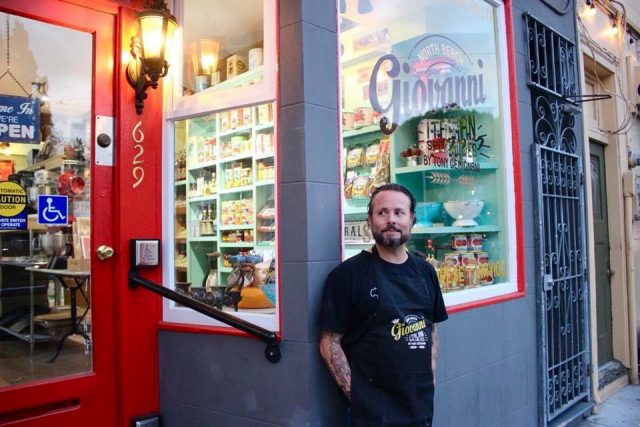 And let’s not forget Giovanni Italian Specialties, the newest offering from local pizzaiolo Tony Gemignani (Tony’s Pizza Napoletana, Capo’s). Named for his son, the spiffy Italian pasta-and-provisions shop occupies a plum spot next to Original Joe’s on Union. The place appears to have been finished for a couple of months, and it’s finally open. Look for fresh pasta, Italian meats and cheeses, artisan focaccia and plenty of other kitchen treats for the aspiring Italian chef. Mangia!

On the other  side of the coin, we’ve lost (at least temporarily) another stalwart Columbus eatery: after 27 years, the ladies at L’Osteria del Forno appear to be hanging it up. They are calling it a remodel, but the word on the street (and the ambiguous note on the door) indicate this might be the end. The number has been disconnected, so take from that what you will. This little spot has been a favorite among locals for decades. If they are indeed gone for good, they will be missed.

Street crime being a topic of increasing concern in North Beach and neighboring communities, it comes as no surprise that Central Station Police Captain Paul Yep has taken steps to address it. In a recent Central Station newsletter, the Captain announced the station’s foot patrol staff had been doubled. The change follows Police Chief William Scott’s moves to counter increasing street violence and property crime, announced in September.

“There were fourteen foot beat patrol officers,” Yep wrote, “covering Fisherman’s Wharf, North Beach, Chinatown, Union Square and the Market/Financial District areas….in March of this year. As of Saturday, September 9th, there are twenty-eight.” A step in the right direction, and welcome news.

Speaking of welcome news, the sidewalk expansion that has been going on around the neighborhood is starting to wrap up, and it’s looking very good. Let’s hope the city can finally get things cleaned up on Green Street and Broadway where they meet Columbus. Both of these stretches have been a mess, and are taking far too long to complete.

Wrapping things up, we have a bit of a missing persons case on our hands here in the Beach. As chronicled here in an earlier article, the Joe Biden Guy (AKA the JBG) is an eccentric young man who has been walking through North Beach on the regular for months. Sounding much like an inebriated carnival barker, he nasally and persistently declaims, almost always about Joe Biden. Well, something about Joe Biden, anyway. Appearing early in the morning and again in the afternoon, he would typically pass directly beneath my window. I could hear him coming and going for blocks.

But alas, over the past few weeks the JBG has fallen silent. Not knowing why he showed up in the first place, it’s difficult to surmise why he may have left. Rumor was he was commuting to his job as a fast food manager, so a change in employment might be the culprit. I kind of miss the guy. I’d like to think he brought his mysterious act to another walking route, to a brand-new bunch of unsuspecting people in some not-too-distant neighborhood. With the amount of strange we’ve got in North Beach, it would be rude not to share.

North Beach Fix will be back with more soon, and please let us know if you’ve got any tips for us to explore. Because anyone can tell you: there’s always something happening in the Beach. See you on the street!