Among its manifold charms, North Beach has one of the richest musical traditions of any neighborhood in the United States. In the popular imagination, North Beach and jazz are almost synonymous, and looking back, it isn’t hard to see why: from the long-forgotten Anxious Asp to the legendary Keystone Korner, this patch of land has hosted a phalanx of music venues. And the music hasn’t all been jazz–far from it.

But like everything else, music clubs pass on. It’s sad to see them go, and this little neighborhood has lost more stages than most cities will ever see. But they are like mushrooms in the cool, damp air: others always appear. Today we take a glimpse back, and remember a few music establishments that North Beach will always miss.

We’ll start the tour on Broadway, at the celebrated Jazz Workshop. One of the focal points for jazz on the West Coast during the genre’s heyday in the 1960’s, the club opened on Broadway in 1958. Immortalized by the many ‘Live at the Jazz Workshop’ recordings made there, the club inherited the all-star roster of downtown’s Blackhawk when it shut down in 1963, and hosted a who’s who of jazz greats: Bird, Monk, Miles, Dizzy, Coltrane and dozens more. 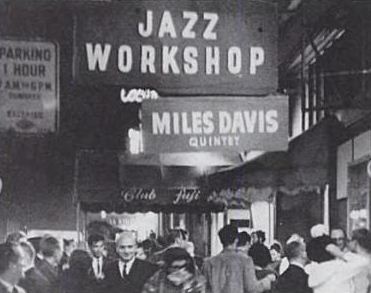 Cannonball Adderley was a common headliner at the club, and his act was so popular that crowds would throng the sidewalk to hear him work the saxophone. Charlie Mingus also frequented the Jazz Workshop’s stage, and was known for his aggressive, unpredictable performances. Between his groundbreaking original numbers, he was known to abandon his bass to crack a bullwhip over the heads of his alarmed audience.

To read my story, visit the Belle Cora website.