There are a lot of good things about North Beach, and as regular readers know, I spend a fair amount of time enumerating the neighborhood’s virtues here on the blog. I’ve been here for a decade and a half now, and happily my enthusiasm for our little corner of San Francisco hasn’t waned a bit.

One of North Beach’s best qualities may just be our resilience, something which has been on full display in our response to the Covid crisis. While many neighborhoods have been hollowed out by the protracted slowdown, for the most part North Beach businesses have soldiered on. To be sure, the pandemic has been difficult––but along with the change in people’s habits, North Beach has once emerged as the city’s most vibrant quarter.

Naturally, our restaurants have played a big part in that, perhaps none more than Tony’s Pizza Napoletana. Tony Gemignani’s flagship fought hard to stay open throughout the crisis, and to keep its employees working. Of course, pizza deliveries exploded at the onset of Covid, and once dine-in customers began returning, Tony’s became busier than ever.

No restaurant could be more deserving. As a longtime resident of New York City (and self-respecting foodie), I’ve long said that Tony’s is probably America’s best overall pizzeria. And it only gets better as the years go by. Case in point: in January, Tony updated the menu. Naturally, when I heard there were new pizzas at Tony’s, I wasted no time checking them out.

The first of the four to hit the table was the That’s My Jam, a wood-fired pizza with housemade bacon fig jam, medjool dates, prosciutto di parma, point reyes blue, piave and mozzarella cheeses, caramelized onions and arugula. It’s a little bit on the sweeter side, and not dissimilar to the Gold Medal-winning Cal Italia, but baked in the wood fire oven. If you’re a bacon fan with a penchant for the sweet-and-savory, this should be on your list.

Next up was The Carnivore. As you might have guessed, this is Tony’s all-meat entry––something he surprisingly has never offered before. Topped with salami, thick & thin cup ‘n’ char pepperoni, Italian sausage, smoked applewood bacon and ham, this pie could easily be heavy and over the top. It is anything but, the crispy Classic American crust lending it a lightness and balance that make this pizza a must-try for meat lovers. 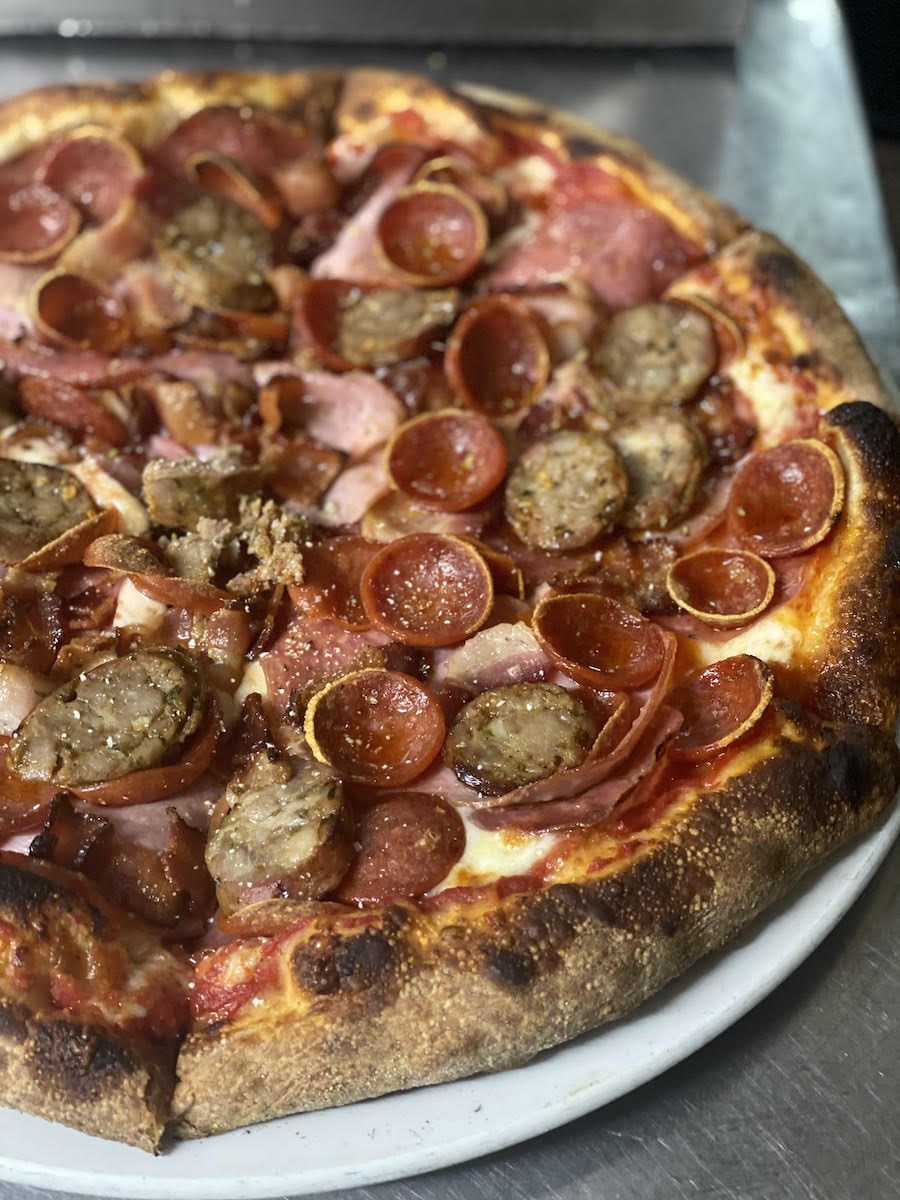 I’ve always been a huge fan of Sicilian style pizza, so I was psyched to see a new version hit the menu: topped with ricotta, sliced mozzarella, pesto artichoke cream, burrata, agave, garlic, hot pepper oil, red pepper, the Burrata Queen did not disappoint. There’s also a secret ingredient in there, and try as I might, I just couldn’t suss it out. Clearly, if I want to solve the mystery, I’ll have to eat this pizza again. Alas, my work is never done. 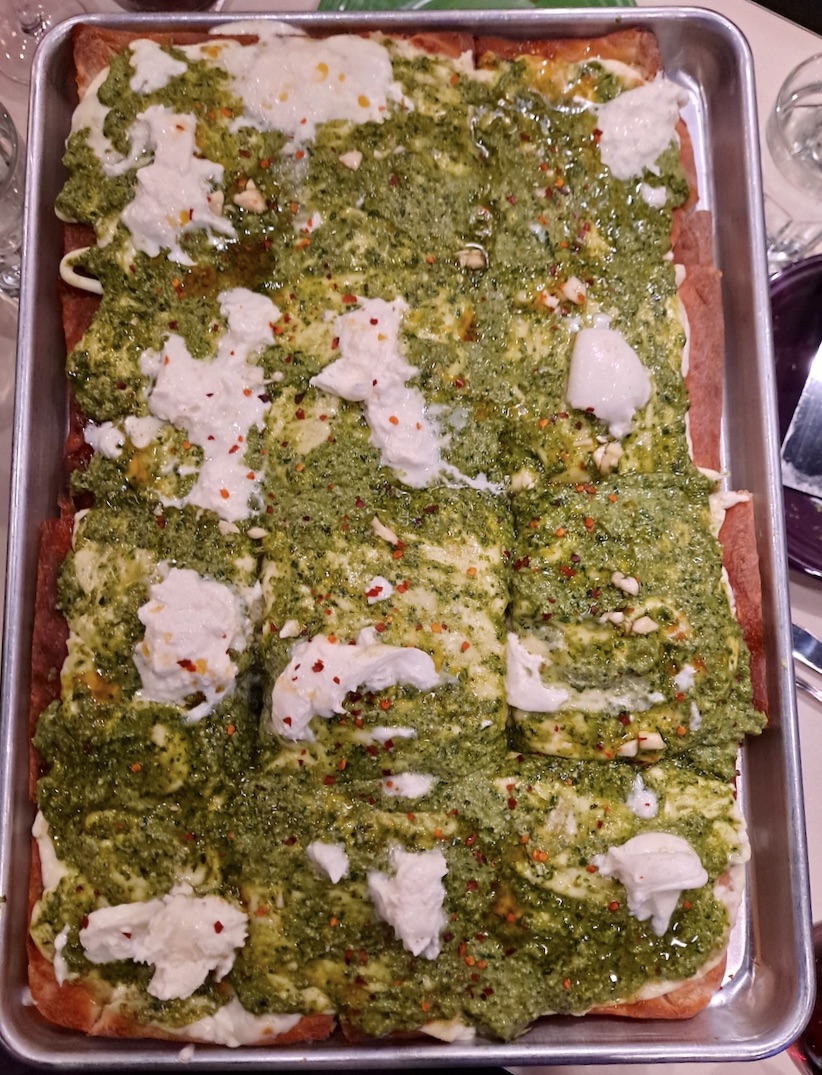 With ricotta, mozzarella, pesto artichoke cream, burrata, agave, garlic and hot pepper oil, the Burrata Queen is a Sicilian pie unlike any other. Photo: Joe Bonadio

It was close, but the final entry was my favorite of the lot: the El Jefe. Easily the most imaginative pizza I’ve had, this baby combines apricot habanero jam, carnitas (yes, carnitas), mozzarella, white onion, fried plantains and cilantro. For a final touch, it’s lightly misted with orange juice before it comes to your table. This melange might sound a touch eccentric, but trust me, it’s magic. The plantains add just enough sweetness to round out the other ingredients, and it all comes together perfectly. This pie disappeared in mere moments. 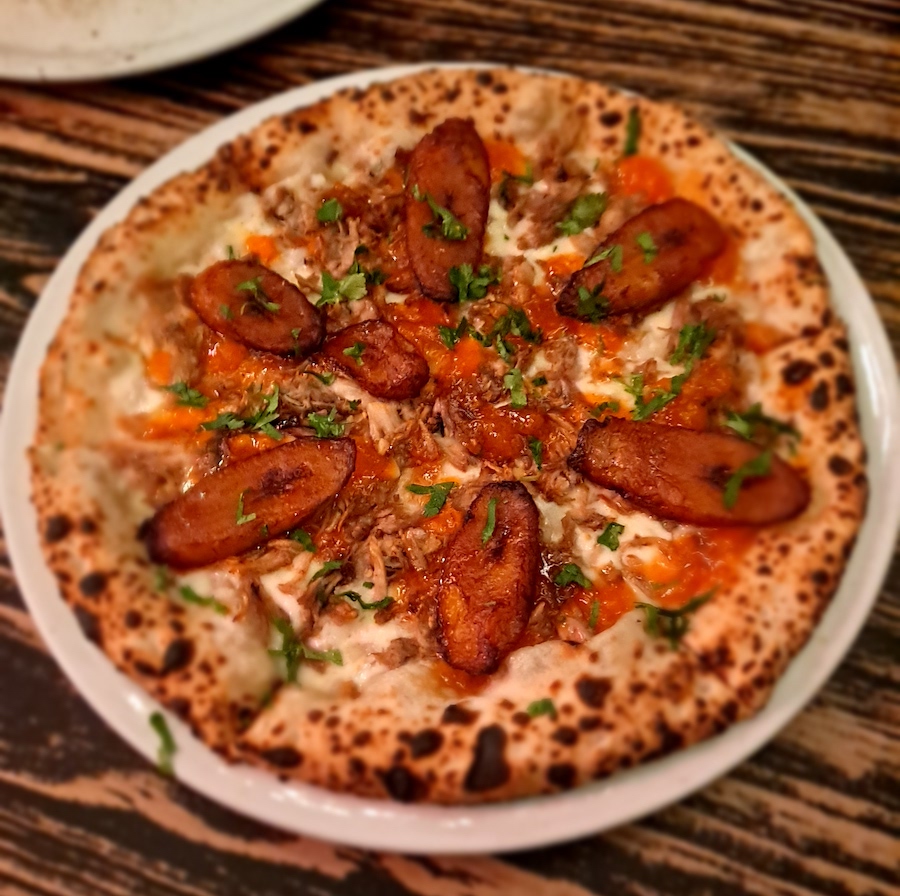 Carnitas and plantains on a pizza? The unbelievable El Jefe is now on the menu at Tony’s Pizza Napoletana. | Photo: Joe Bonadio

For health-conscious diners, there are also a couple of new salads on the menu. First off is the Blue Gem, with little gem lettuce, medjool dates, point reyes blue cheese, candied walnuts, red onions and smoked applewood bacon. And right up my alley is the Italian Chopped Salad, with romaine, olives, red onion, salami, banana & peppadew peppers, shaved parmigiano and provolone. After all, man cannot live on pizza alone.

Enjoy the new lineup, everyone––and I’ll see you in the neighborhood!