After nearly three months of limping along on online sales and curbside pickup, San Francisco retail reopens today. Retailers are breathing a heavy sigh of relief, and judging by the numbers that came out over the weekend for newly-reinstated outdoor food service, the crowds are more than ready to shop.

One spot I’m particularly happy to have back is Real Old Paper Gallery, which has gradually become one of my favorite spaces in the city. Longtime poster dealer Andy England opened his Columbus Avenue gallery nearly four years ago, specializing in original vintage prints, some dating back over a century. England’s deep collection is constantly changing, so there is always plenty of new inventory, and the juxtaposition of different genres and eras on display always makes for a satisfying afternoon browse. 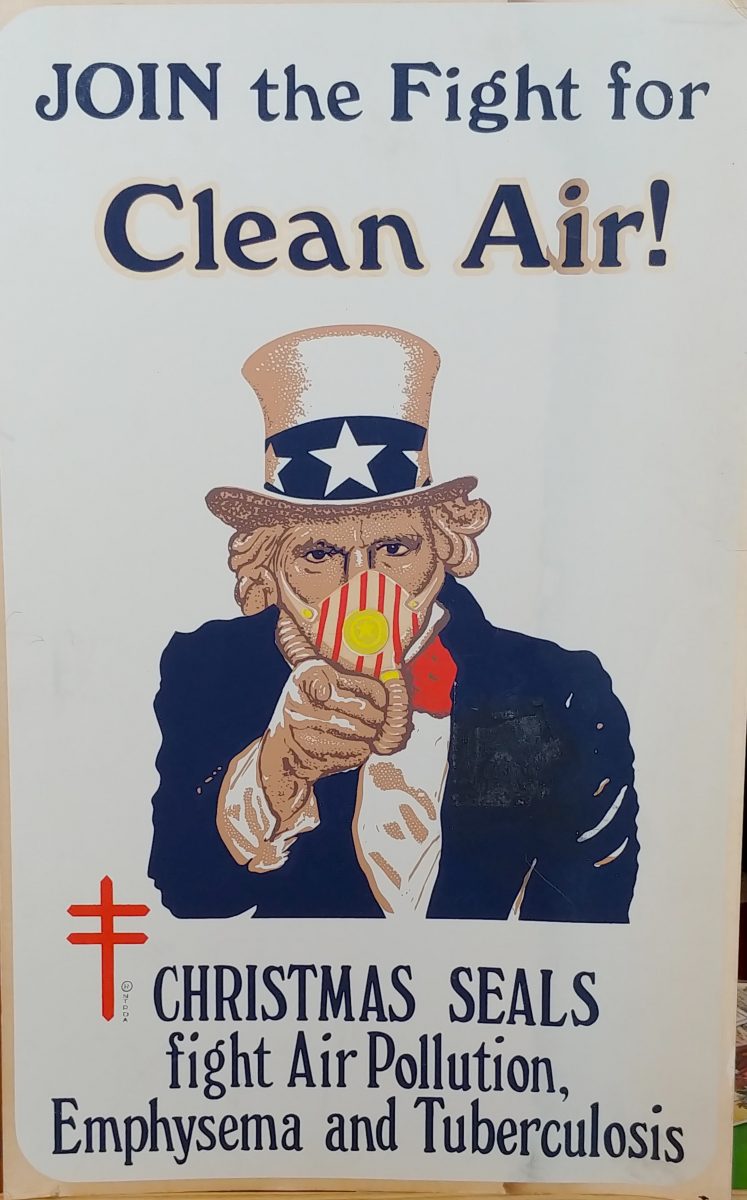 This vintage poster for Christmas Seals from the 40’s takes on a new resonance in the Covid era. | Photo: Joe Bonadio

It’s also a pleasure dealing with England, the gallery’s owner (and Decent Dude, according to his business card). Andy knows his stuff, and he’s got the enthusiasm of a natural collector, having been at it for nearly 15 years now. It wasn’t until I spent some time talking with him that I realized how much I’ve missed having him in the neighborhood—and as usual, he’s got some cool new things to show off.

Our conversation is below, lightly edited for clarity.

JB: I see you have some new inventory. The first thing I noticed was this one, of a young Cesar Chavez. There’s something about it that really draws you in.

AE: It’s by Paul Davis, who was pretty prolific in the 60’s and 70’s. This is one of the few that I have that’s politically motivated. It’s for an event: a speech and meet-and-greet with Cesar Chavez in New York, about the California Grape Growing Association and the strike that was going on.

This poster wouldn’t have had a wide circulation, so there’s not that many of these around. I’m very fortunate to have my first two. 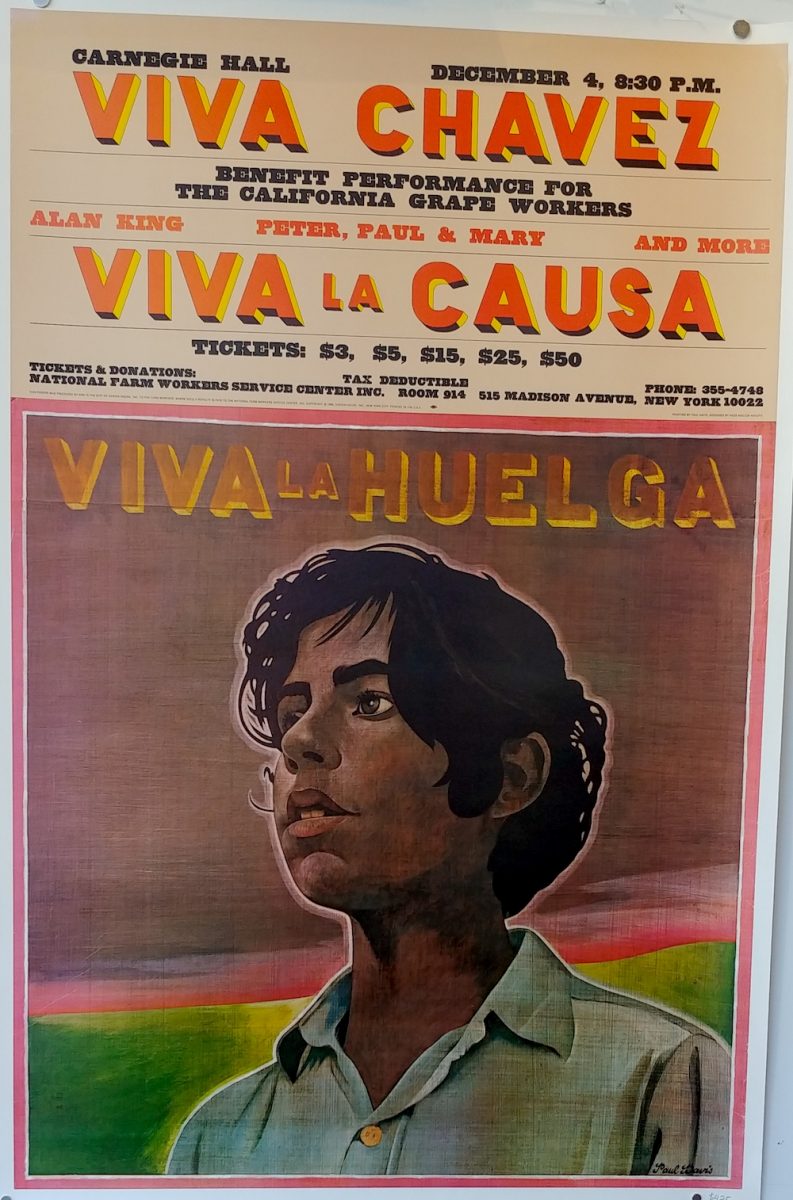 JB: Tell me about this one.

AE: The other end of the spectrum entirely. Monte Carlo beach, by Sem. Sem was very prolific in France during World War One and just afterward. He did war bond posters during the war, as well as posters encouraging travel after the war ended. One of the most common pieces you’ll see of his is a travel poster from 1920 for Cannes in the South of France.

This is a far scarcer piece, though. It’s very valuable, a borderline 5-figure poster. It shows Adam and Eve wakeboarding with the serpent that convinced her to eat the apple….it’s paradise. Monte Carlo as the Garden of Eden.

It’s so refreshing, because if you’re accustomed to Sem’s work, you’ve seen mostly darker, more solemn war effort pieces. The mood definitely was not bright and colorful like this. 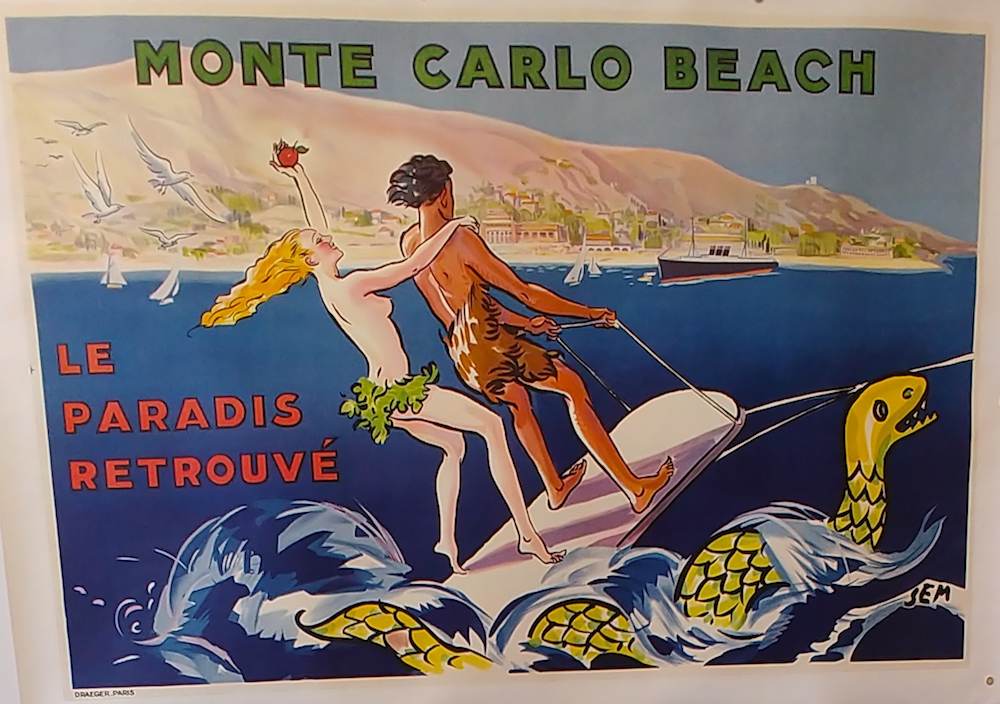 JB: This one with the tiger is amazing. The colors are so vivid—it almost reminds me of a black-light poster.

AE: Well, it’s mid 50’s, early 60’s, so that’s certainly almost into the black light era. Kelly & Miller Brothers had done circus posters in the past, but this one is unique in its style. There’s not much that I’ve had that’s as bold, with the thick outlines this one has.

JB: It just jumps out at you. I could totally put that on my wall.

AE: Out among the flora, too. A lot of circus posters don’t include any kind of background that suggests the animals’ natural habitat, because it isn’t what you’ll see in the circus tent. But this shows you where the tiger would be—in the jungle. It’s very unusual—and this is definitely the first time I’ve ever had that piece. 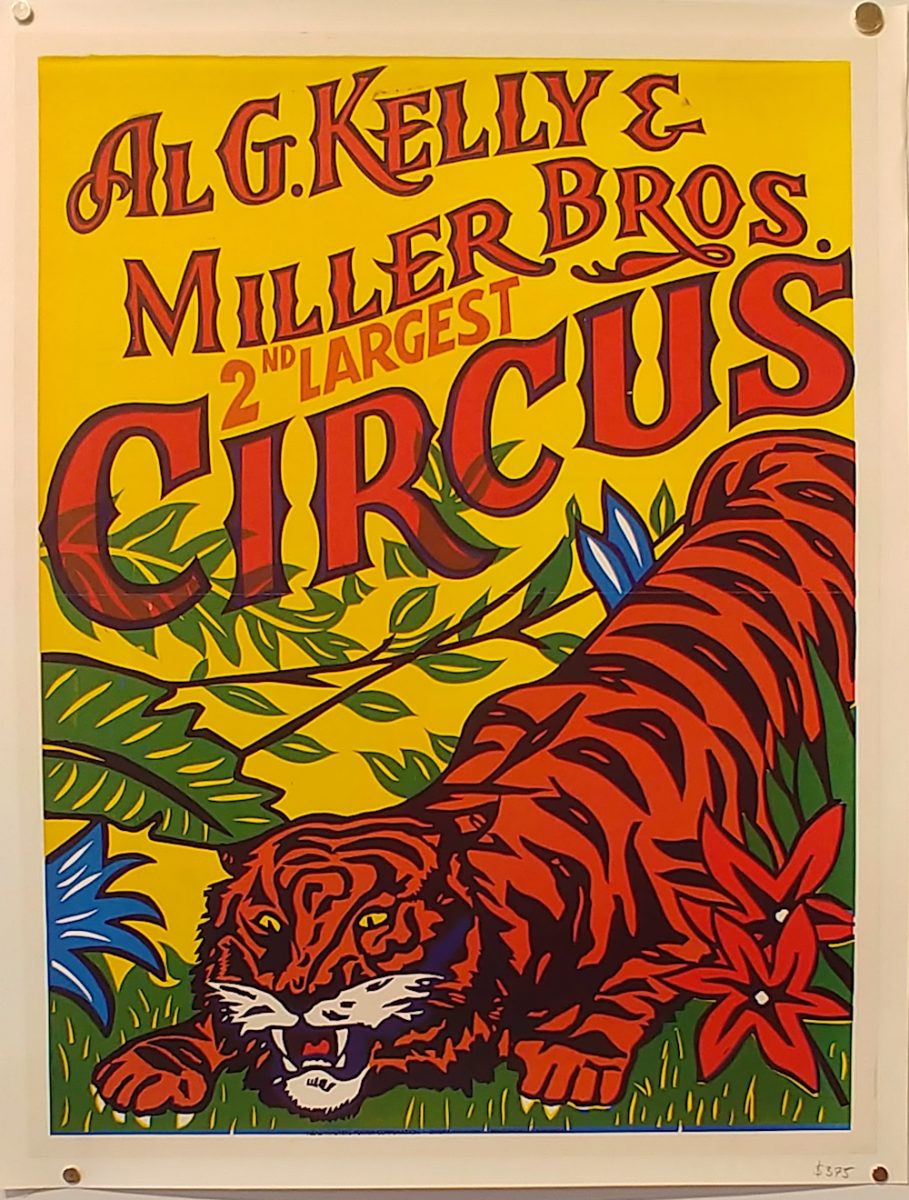 AE: Right, second to Ringling Brothers, Barnum & Bailey. There was no question about who the dominant company was at the time.

Then there’s this one, from Shrine Circus. Who has ever heard of that? Look at the graphic: the clown’s face is not very detailed, but paired with the tiger it contextualizes the piece. The tiger is also not rendered with much depth, but the simplicity of it works with the clown imagery to get the message across. Very effective. 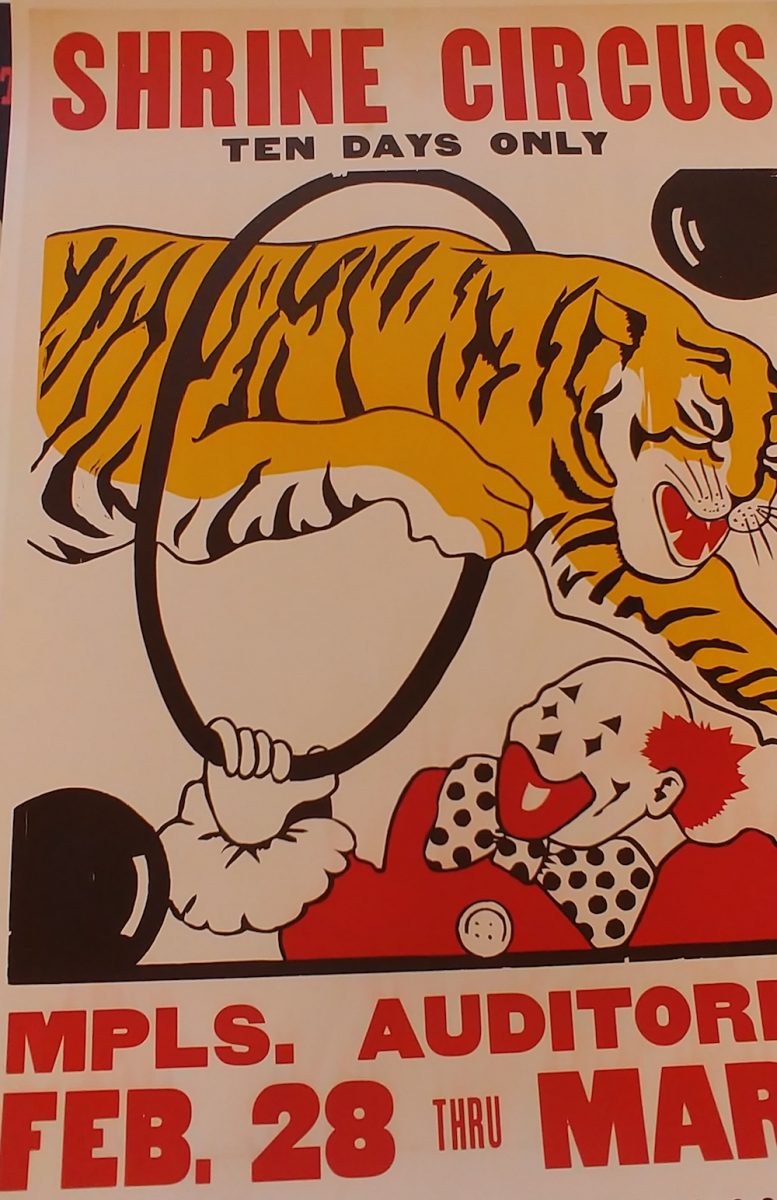 JB: I love it. Where did you come across these?

AE: I recently bought a huge circus collection. Over 30 pieces, maybe 40 all together.

Speaking of circuses, retail closure has come to an end. That means Real Old Paper is back with their regular hours: Tuesday through Saturday from Noon to 6:00 PM. Make sure to stop in and welcome Andy back!