As we step into the New Year, in spite of the pandemic and the depressive effects of the lingering lockdown, there seems to be a potent sense of expectation in the air. There are good reasons for it: Americans have a new president taking over soon, and two vaccines are in use, with a third coming online. After nearly ten months of near-paralysis, the fundaments of our economy appear healthy, with the Dow sitting comfortably above 30,000.

This doesn’t in any way dismiss the challenges ahead of us, of course. Small business has taken an enormous hit, and businesses continue to suffer and perish every day. It’s a brutal environment even for the most resilient players, and the situation is only becoming more urgent.

Like everyone in his category, restaurateur Tony Gemignani has been fighting to keep his business alive during the pandemic. Buoyed by the surge in pizza delivery, his Slice House by Tony Gemignani  has managed to keep the gears turning and employees working. But of his 29 restaurants, most are still dark while we await reopening. 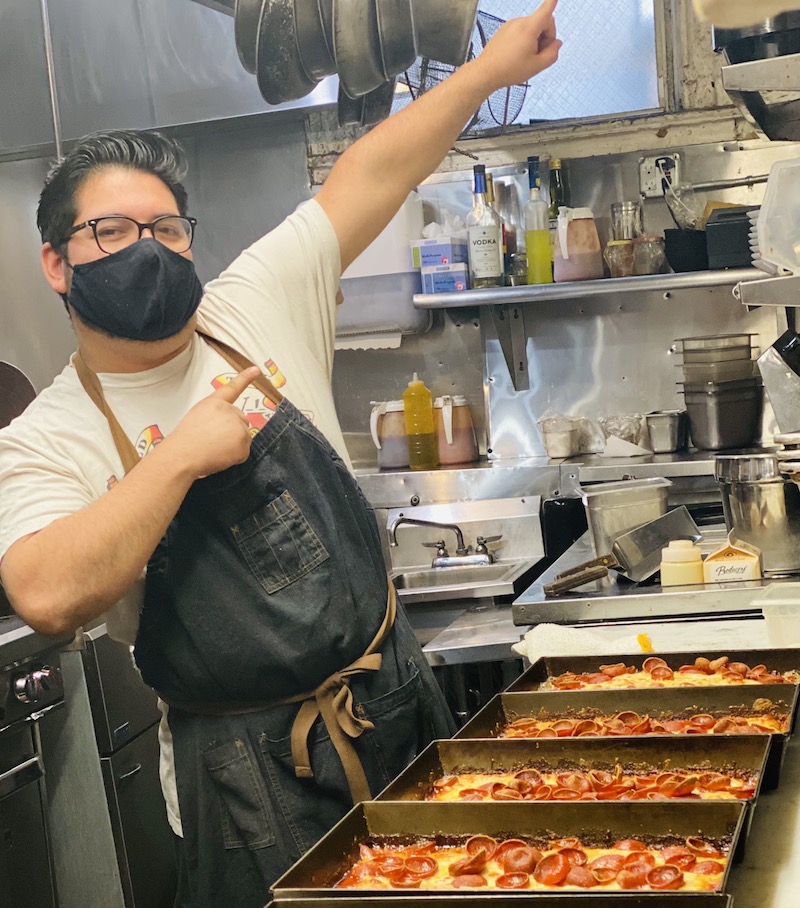 Chef Oscar readies another batch of Detroit pizzas for the hungry and homeless on Christmas Eve.

Remarkably, that hasn’t slowed Gemignani down. Since the first lockdown, he has pivoted to remain relevant and profitable, and over the last year Gemignani has become a fount of inspiration and education in the restaurant community, regularly giving online talks about the unique challenges the industry is facing.

Covid also hasn’t stopped him from giving back to the community, something the chef has become known for. This week, I spoke with Gemignani to find out what he’s been getting up to over the holidays.

Joe Bonadio: I understand that you did something special for people who are having a hard time this Christmas.

Tony Gemignani: Yes. I connected with Marc Bruno here in the neighborhood, who works closely with local charities. To donate food right now–during Covid–it’s very difficult. You’ve got to find out who’s working, what the situation is with staffing, and it’s hard to go direct. 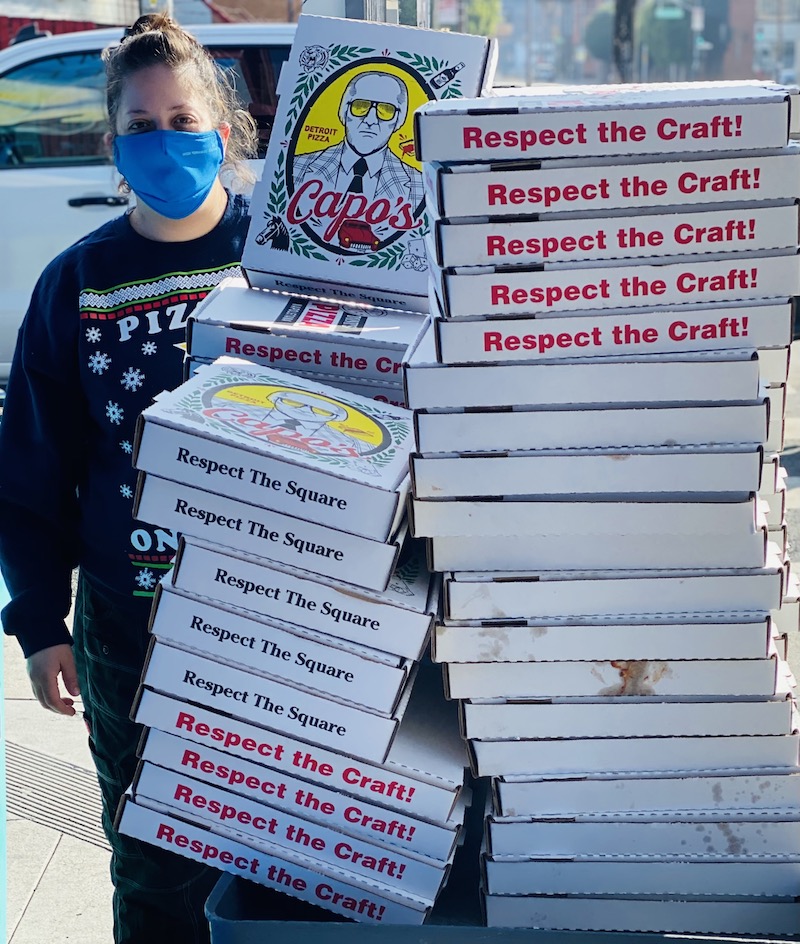 Chef Laura Meyer with just some of the many pizzas that Tony Gemignani’s restaurants gifted to the homeless for the holidays.

JB: It takes a lot of work.

TG: It does! You figure you want to give something away free, how do you do it? But it’s complicated.

So we ended up going to Marc. He works with St. Vincent de Paul, and they have three outposts. We went to MSC, Division Circle and Riley. Riley was for victims of domestic violence, and the others were homeless shelters.

Along with that, I collaborated with a guy in New York named Hakki. He does a lot of donations to the homeless. But again, donating food now is very different. It’s not like you can walk through the city and just give people food. This is Covid world. So it needs to be more secure: each piece had to be in its own box, and you couldn’t hand them out to people. You had to pass them off to someone else to hand them out. 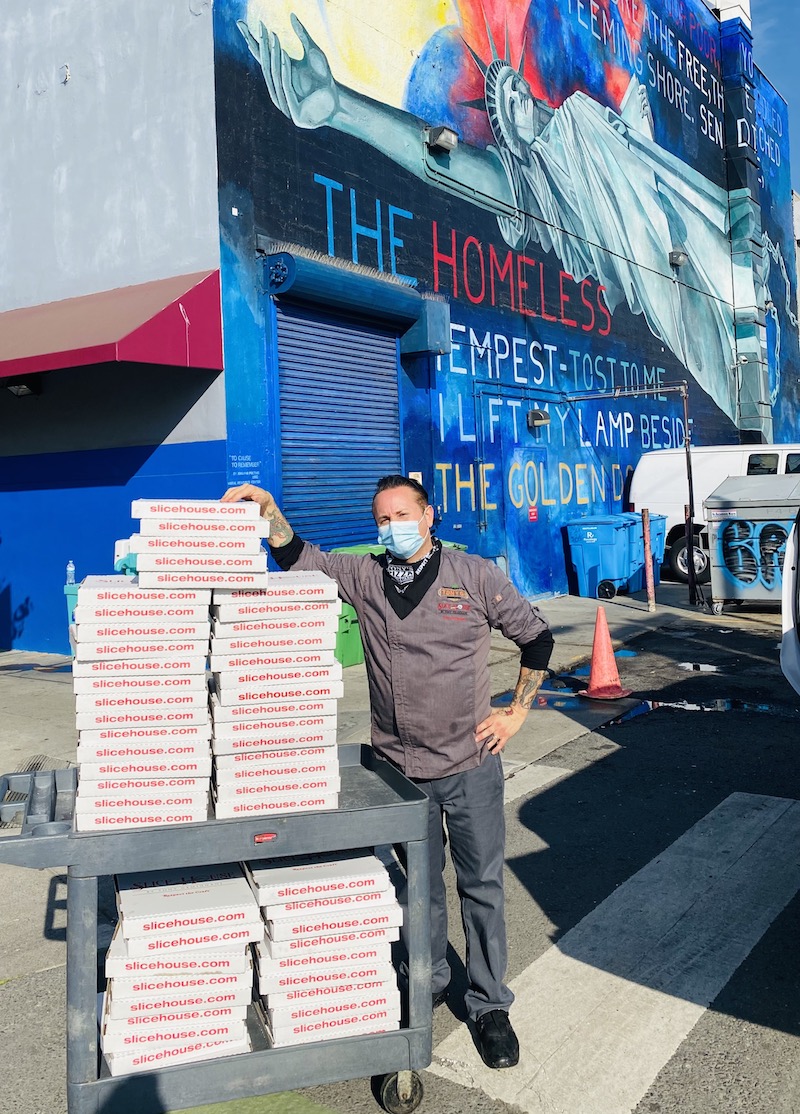 JB: A lot of obstacles to negotiate.

TG: Yeah. But Hakki does this a lot. He’s a big name now, but I’ve known him for a long time. Years ago, I was doing either Good Morning America or The Today Show in New York, and my wife came with me. Was she even my wife then? This was years ago.

We got into the city really late, and I went across the street to a place called Tuscany Pizza, to grab a couple of slices for me and Julie. You’re in New York, you gotta get a slice. 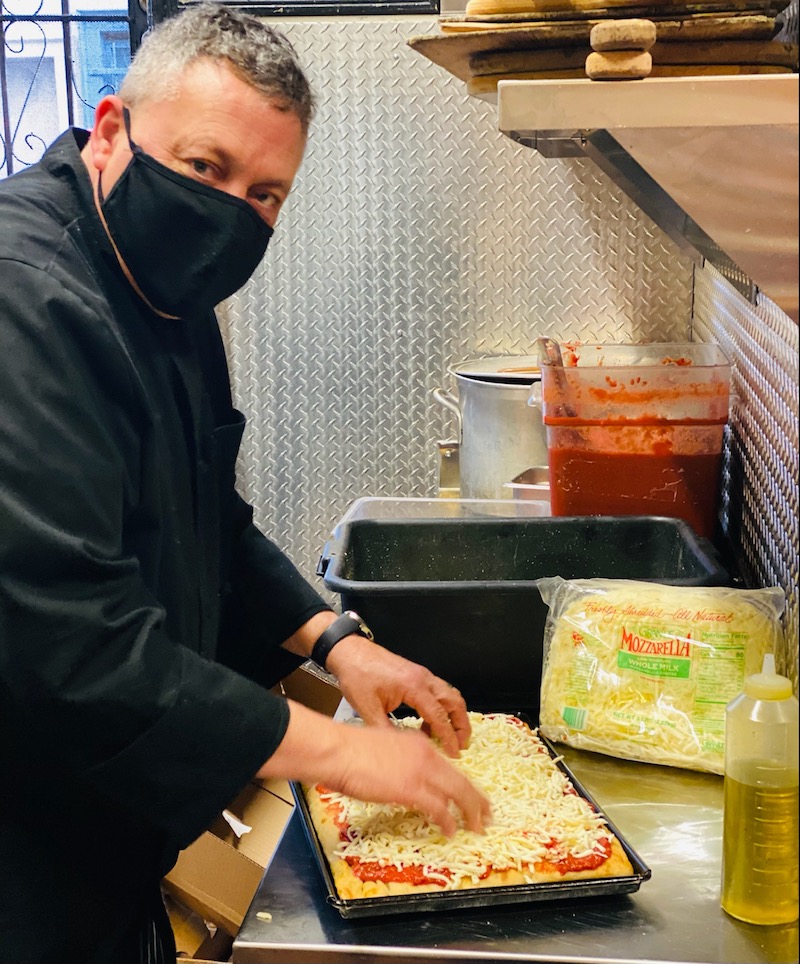 Chef Tim tops a Sicilian pie in the kitchen at Tony’s Pizza Napoletana.

And this guy behind the counter goes, “Hey! You’re Tony! I’m Hakki!” He was from Turkey by way of Canada, I think. “I love pizza, and I’m going to be big one day!”

And I was like, That’s cool, man. I had my backpack with me, so I gave him a copy of my book. It was my first book, Pizza. I signed it, and he was joking around with me, saying he could toss a pizza around too. The guy was a fighter, had little gold gloves on his chain.

Years later, he became a pizza acrobat, and ended up winning a local competition with the U.S. Pizza team. He played on that, and opened up a pizzeria called Champion Pizza. Now he has multiple pizzerias, and is a spokesperson and a philanthropist. He feeds the homeless in New York regularly, and has something like seven million followers on Instagram. 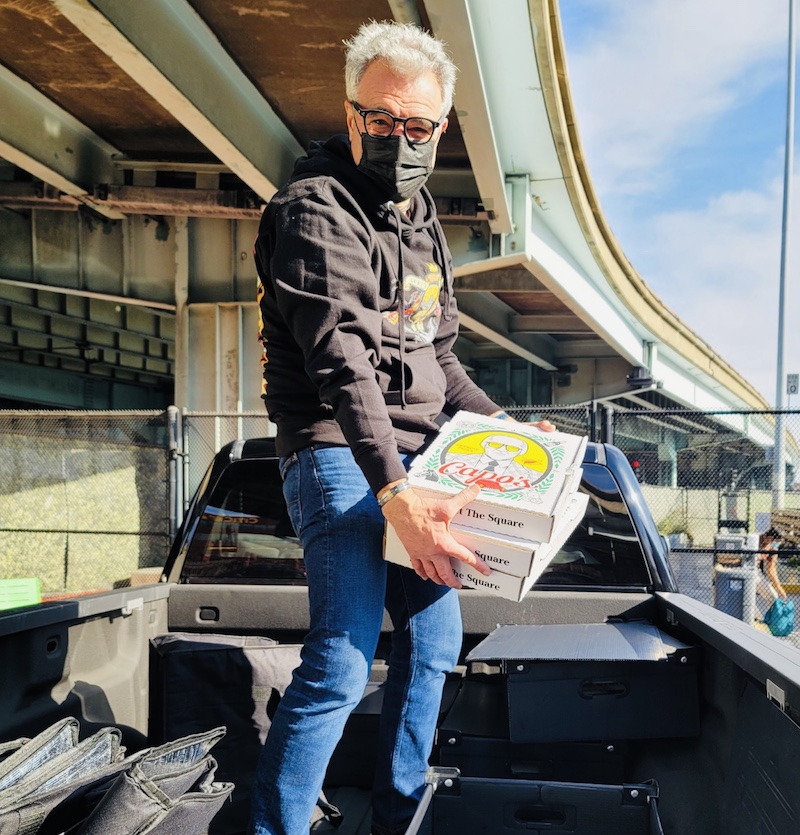 Natale, GM at Tony’s Pizza Napoletana, pitches in for the homeless on Christmas Eve.

TG: I went back to visit him like fifteen year later. I walk through the door, and again, he’s like, Tony! How you doing?!

And I pulled out my Pizza Bible, and gave it to him. And he said, “You know man, fifteen years ago you did the same thing. You pulled a book out of your bag, and signed it. And now you do it again. This is the greatest thing.”

He’s always been a nice guy. So recently when I did the world record for longest pizza, we got pizza makers from all over the world, and I had him come out to L.A. It’s funny, I’ve known the guy for like 20 years, and we’ve only seen each other like half a dozen times!

Now he’s a giant in the business. So I got a hold of him, and said Hey Man: for Christmas Eve, how about I donate pizzas out here, and you do it in New York. I know you do it a lot, man, and I think it’s great.

And he said sure, let’s do it. 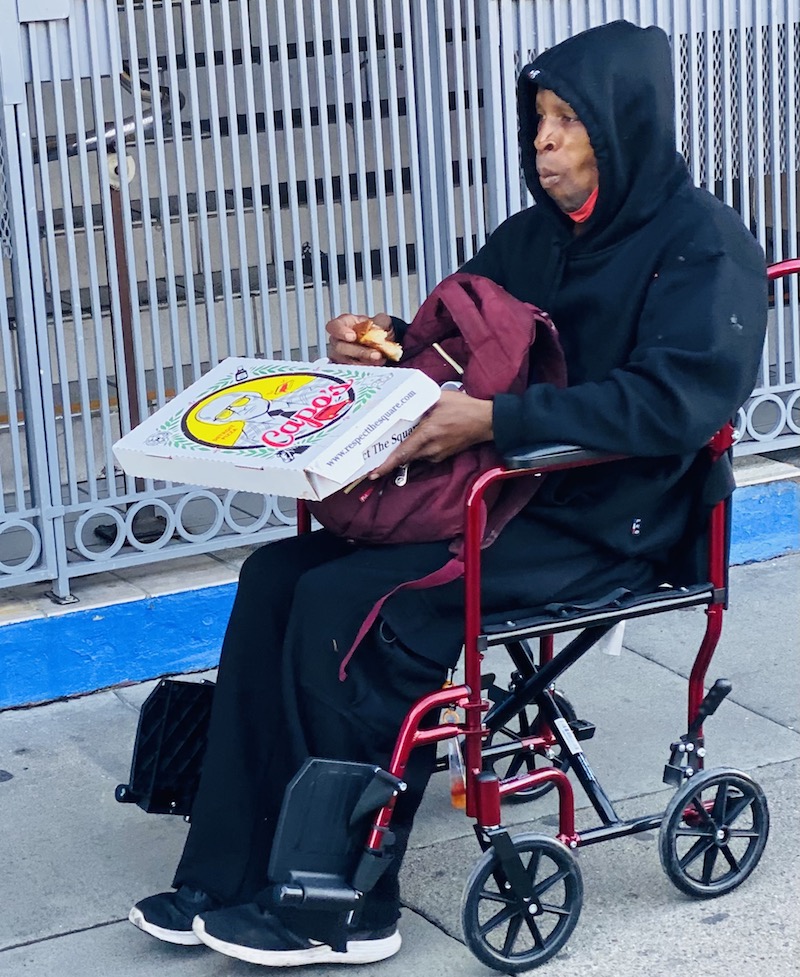 The holidays can be tough, especially when you’re down–and good food goes a long way.

TG: So I told him, let me figure it out. Then it was Okay: How do we do this?

That’s when I got in touch with Marc Bruno, and he was very helpful. It was Laura, Chef Tim, Oscar, Natale and the whole Tony’s/Slice House/Capo’s crew. Some of them were working on their day off, so they were here on Christmas Eve instead of with their families.

I got here at 6:30 A.M. and cranked up the ovens, and everyone started to roll in. We donated about 700 slices. And good slices, generous slices. We had to do it for lunch, because  on Christmas Eve the shelters have their Christmas dinners planned. And we fed not only the homeless, but the workers too, so it was some of both.

We did our NY All Star Sicilian, and our Detroit Rosa….those were probably the first Detroit Style slices some of those folks had.

I hope they enjoyed them.

St. Vincent de Paul works on behalf of the homeless, the working poor, and those living on the margins of society, providing direct services, resources and active person-to-person care to over 1,000 people every day. To donate or volunteer, you can visit them here.