Today we see in the news that Pope Francis has tied with Donald Trump for second place in a poll of the world’s most admired men (both lost to Barack Obama, which is no surprise: the sitting US president typically wins first place). I’ve no comment on Trump, because far too many people are talking about him already. I do have a few things to say about the pope.

Pope Francis has been on a tear ever since his swearing in, generating positive publicity for a Catholic Church that has been riven by bad press for years. His pronouncements on everything from tolerance toward homosexuals to the souls of animals (yes, apparently Rover can go to heaven) have shaken up the religious and political establishment. He has taken up for the preservation of the Amazonian rainforest, argued that atheists should be judged by the goodness of their work, and railed against waste, saying “throwing away food is like stealing from the tables of the poor.” 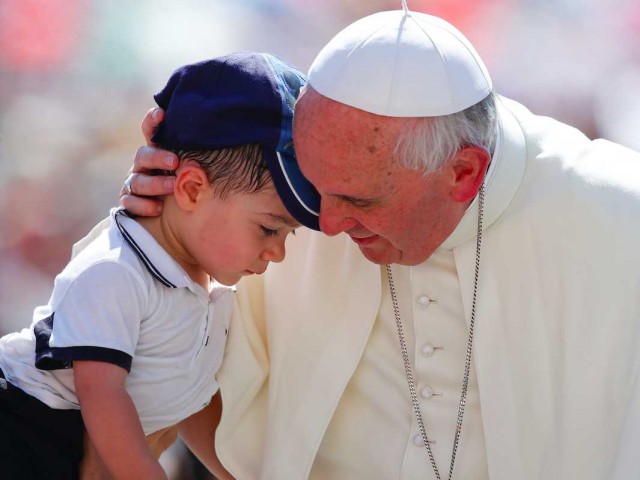 It isn’t just the pope’s words that are refreshing. As archbishop back in Buenos Aires, Francis would sneak out of his chambers at night to spend time with the homeless, sitting in the street and eating with them to show he cared. He doesn’t appear to have changed, either: a couple of months back, the pope actually auctioned his Harley Davidson, using the money to open a soup kitchen in Rome.

These are all admirable, and certainly surprising coming from the pontiff. They paint a picture of a man with little fear of the establishment, and with his heart firmly in the right place. That isn’t the most interesting thing about Pope Francis, however.

Laudato Si, the papal encyclical published earlier this year, provoked a lot of hand-wringing in business circles, positioning Pope Francis’ Catholic Church as the unlikely antidote to free market excesses. With its discussions of waste, income inequality and the climate crisis, Laudato Si was a blow to many conservative Christians, who were unaccustomed to hearing these criticisms coming from inside the church, no less from the pope. Meanwhile, scores of people both inside and outside the Christian community (atheists among them) have had a completely different reaction: they love  this guy.

Of course, Pope Francis sings a very populist song, and he’s taken up a theme that has been resounding of late: the defense of the little guy from the corporatocracy, or corporate state. And his critics will contend that the pope’s positions are understandable only in context: as the arguments of a spokesperson for an outdated, irrelevant institution, desperately in need of a public relations victory. But the Catholic Church is not the only institution that is defending its relevance in today’s world.

Corporate capitalism has had a spectacular run in this country, particularly over the last half-century. With the rise of careerism and women’s entrance into the workforce en masse, the modern corporation has arguably usurped the family as the preeminent institution of American life. Labor mobility routinely sends young people thousands of miles across the country seeking work, weakening family ties and insuring the primacy of “the job” as the driving force behind our daily lives. Today, worker productivity stands at the highest level ever recorded, and the world’s biggest companies are flush with profits.

Following so close on the heels of the 2007-2008 bailouts, this success has left plenty of people resentful, however, particularly toward the banking and financial sectors. Democratic presidential contender Bernie Sanders has taken advantage of that ire, running a popular campaign that revolves around higher corporate taxes and breaking up the big banks. Rampant income inequality has led to increased coverage of the privileges of “the 1%”, and enthusiasm for the corporate order is on the ebb.

So, is Pope Francis just trying to compete? The Catholic Church had a healthy head start on the corporation as an institution; in fact, it’s the oldest in the Western world (and lest we forget, they remain one of the world’s largest landholders). But they’ve been losing the publicity battle for years now. Sex scandals and the resulting coverups have eroded the public’s trust in the church, and it has become an antiquated curiosity to many whose parents were loyal followers. Is Pope Francis simply trying to carve out some space for his church, by attacking his biggest rivals for the public’s time and attention – the companies who largely run the modern world?

.
When the pontiff showed up in Havana to meet with Fidel Castro and was photographed shaking the hand of the Cuban leader, I recalled one of Castro’s most famous speeches. Filmed at the dais in front of an electrified crowd, Castro is overcome by emotion as he announces, to wild cheering, the names of the companies to be nationalized by the Cuban people. He 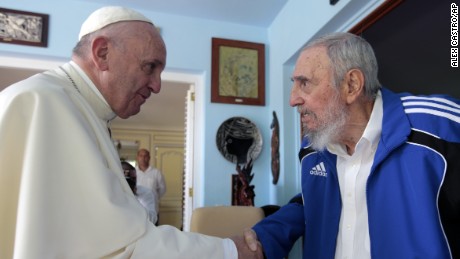 finishes with the greatest offender, The United Fruit Company, which had exploited the island nation for generations. With this act, Fidel Castro had sealed Cuba’s fate as US enemy #1 in the hemisphere, provoking an illegal US blockade that would bend the backs of the Cuban people for decades. The ensuing missile crisis was the ostensible reason for tightening the blockade, but the nationalization of what American companies considered to be their property was Castro’s truly unforgivable sin.

In 1973, Castro displayed a bit of clairvoyance when he observed, “The United States will come talk to us when they have a black president and the world has a Latin American pope.” Now that this unlikely prophecy has come to pass, Pope Francis has taken up his own challenge to corporate wealth and the 1%. He is taking a courageous stand, and much like Castro, his motives are being questioned by those in powerful circles. Unlike Castro, the pope is not an isolated and easily marginalized figure: his church has over 1.2 billion members and employs over a million people worldwide. The Vatican has diplomatic relations with almost every country on Earth, and remains a vitally influential voice in world affairs.

They have serious troubles as well. The sexual abuse scandals of the last two decades have shamed the Church deeply, and cost the American Catholic Church alone more than $3 billion in legal fees and settlements. Donations are down significantly, and fewer Catholics are deciding to become nuns, priests and monks. Pensions are reportedly underfunded, and a number of American dioceses have filed for bankruptcy.

According to some observers, this crisis is the sole explanation for the seemingly rogue election of Francis to the papacy. He was the most progressive and probably the least likely candidate, and his choice was no accident, they say; rather, it was a calculated move to rebrand the church at a time when its popularity and fortunes are both sorely waning.

This analysis is cynical, and doesn’t take into account the church’s legitimate role as a counterweight to state power and force for social good. The Catholic Church is the largest charitable organization in the world: it’s 2010 expenditures were estimated by the Economist to be over $171 billion (that’s a b), with the lion’s share of that going to hospitals, schools and charities. By the numbers, the church is the most beneficent organization on the face of the Earth. It plays too big a role in modern global philanthropy for us to dismiss it, whether it be for political, religious or historical reasons. The Catholic Church, for all its wealth and power, is still one of our most effective advocates for the poor. In that sense, Pope Francis was the best choice for pope, and he has showed up for the job with a revolutionary zeal that undoubtedly pleases Fidel Castro. It should please us, too.