As we turn the corner into summer, It’s been a crazy couple of weeks here in San Francisco. And truth be told, it’s kind of a relief to have the NBA Finals and the big North Beach Festival behind us. But as always, it was fun while it lasted, and it’s a welcome bonus for the Warriors to emerge victorious–especially in such spectacular fashion.

And speaking of fashion: did you happen to check out the opening act for Game 2 at Warriors’ Oracle Arena on June 3rd? Surely you were still watching that early in the series, expecting, like many of us, for the Cavaliers’ LeBron James to actually show up and play. 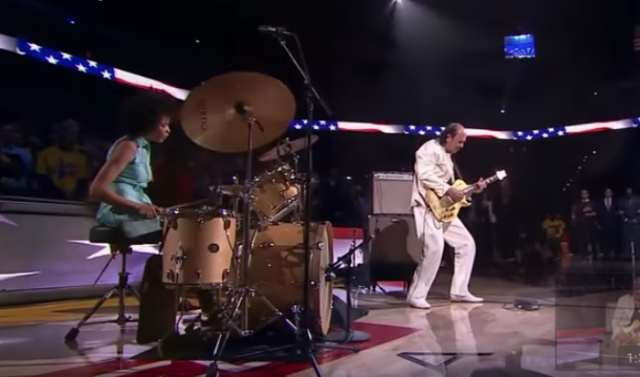 Cindy Blackman Santana and her husband, legendary guitarist Carlos Santana, tear it up at the second game of the 2018 NBA Finals at Oracle Arena in Oakland, CA earlier this month.

That aside, if you were watching that night, you were in for a real treat: legendary Bay Area guitar player Carlos Santana and his wife, drummer Cindy Blackman Santana, performing the national anthem at the game’s start. Better yet? The couple were both wearing outfits provided by North Beach’s very own Al’s Attire.

As Lenny Kravitz’ touring drummer for many years, Mrs. Santana is pretty famous herself, and the two musicians married in 2010 (Carlos actually proposed to her onstage). Meanwhile, this is their fourth consecutive year performing at the NBA Finals in Oakland. Each time it has worked out to be Game 2, and the performance has become something of a tradition for players and fans alike. And with millions of people watching, you know the Santanas weren’t going onstage in something off the rack.

Happily, the couple knew where to turn. Al Ribaya has been making clothes for Carlos since the 80’s, so he’s gotten used to seeing his creations on the screen. Indeed, both Santanas are frequent visitors to Al’s eclectic Grant Avenue shop. On a recent afternoon, I was visiting Al’s when Carlos strolled in. Starstruck as I was, I still wasn’t prepared for Cindy Blackman Santana to show up five minutes later.

So when I saw them onstage at the Finals a couple of weeks hence, warming up for their pre-game performance, I had a hunch. And when I spoke to Al that night, he confirmed it, beaming. Carlos had been wearing a custom Al’s Attire white suit and boots; Cindy, a lovely turquoise dress and custom boots of her own, everything from Al’s workshop.

Ever the humble clothier, Al was beyond delighted. “Everybody loved my turquoise,” he said.

Joe Content reports regularly on the urbane, quasi-tame menagerie that is San Francisco’s North Beach, along with other topics of interest. Come back soon for more.