As any seasoned traveler will tell you, San Francisco’s North Beach is one of America’s quintessential drinking neighborhoods. Sure, there’s some steep competition out there: The French Quarter of New Orleans, Key West, Williamsburg….the list goes tipsily on. But North Beach bars are unique, and there may be no neighborhood with a more potent combination of iconic venues, lawless history and booze-centric cafe culture.

Things are always changing in North Beach, but there is a certain permanence to it. A place of monuments, memorials and landmark architecture, North Beach is a neighborhood whose history is always clearly on display. Along with our longtime residents, the gathering places that have survived to the present day are one of the clearest threads to our storied Barbary Coast past. Though it’s a pretty crowded field, there are a dozen or so North Beach bars that deserve special mention (and merit a visit, should you somehow have passed them by). Today, we give you three of them.

The grandaddy of them all, the Saloon is the oldest drinking establishment in San Francisco, It’s been operating as a bar continuously since 1861, making it the oldest bar west of Colorado, and it’s been almost unchanged for a century and a half. Emblazoned with old band posters and a large sign proclaiming CASH ONLY, it’s a dive’s dive with a serious attitude. It’s also known as one of the best blues bars on the West Coast, and whether it’s a touring act or locals testing out new material, there’s almost always someone on stage. Originally opened as a grocery by Ferdinand E. Wagner, an Alsatian import from Rhin, France, it was soon repurposed and christened Wagner’s Beer Hall. Wagner tended bar and lived upstairs with his wife and sons, one of whom ultimately took over the business. It’s been owned by the Mu family since the Fifties; current owner Myron Mu is a respected promoter who is fiercely devoted to the blues, insuring a steady flow of great music. They host live acts every night of the week, and for set breaks, their jukebox is a killer. 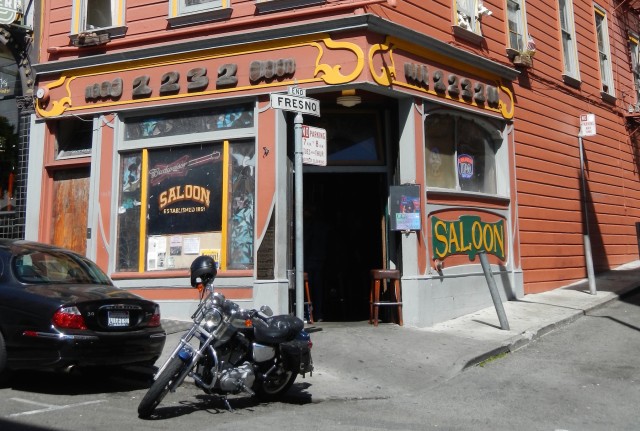 According to the legend, the Saloon is also one of the only buildings in North Beach to survive the earthquake of 1906. As the story goes, the upstairs was a brothel at the time, and popular among local firefighters; they refused to let the place perish, running a firehose over the top of Telegraph Hill from the bay to douse the flames. It’s a great and oft-repeated story – but apparently, it may not be true: around the corner at Specs’ (we’ll return to them in Part 2 of this series), you can see an aerial photo of the block after the fire (shot from a camera tethered to a kite). Contrary to legend, it appears to show the entire block as having burned; 1232 Grant (308 Dupont at the time) is an empty, burnt hole in the ground. It’s posted on the back wall, so go have a drink, take a look and decide for yourself.

The Saloon’s elaborate wooden bar (the original) is typically crowded with a motley crew of grizzled, good-natured regulars, including a very nice woman who sits and draws pornographic comics, sharing the work freely with her fellow imbibers. On a recent Sunday, I sat next to her and watched Blues Power’s guitar player walk right down the center of the bar for his solo without kicking over a single drink. The dance floor tends to boil over, as it did that day, and the mix of people – young and old, bikers and bank tellers, tech bros and tourists – couldn’t be more random. Make no mistake, the Saloon is rough, but it’s legit, and the vibe is simply unbeatable on a good night. And if you check your manners, they’ll pour you a punishing amount of whiskey for less than five bucks. Salud!

Before it closed in 2009, the San Francisco Brewing Company was the second oldest bar in San Francisco. Opened originally as The Andromeda Saloon in 1907 and situated on Columbus at the edge of the old Barbary Coast, it was one of the only neighborhood saloons to persist through prohibition, renaming itself the Andromeda Cafe and serving seafood to go with the covert cocktails. It’s played host to some famous characters: fully 103 years ago, before he won his belt, heavyweight champion Jack Dempsey tended bar there, and there are those who claim the FBI captured gangster Baby Face Nelson there in 1939. 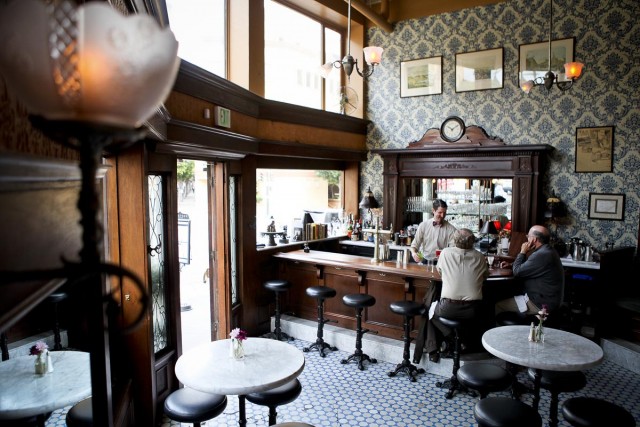 After spending a few years as The Albatross, the place was acquired in 1985 by Allan Paul, a brewer with a special affection for Barbary Coast history. He kept it true to the original, but added an artisanal on-premise microbrewery, renaming it the San Francisco Brewing Company. Though popular, they eventually closed in 2009, to be succeeded the following year by Comstock Saloon (started by three alumni from Hayes Valley’s Absinthe). These guys are known for their cocktails, and the chefs throw down some fine cocktail-inspired grub, including a seriously mean burger. Take note: on Fridays, the purchase of two drinks will get you a free lunch, a sweet deal.

Through its various incarnations, the spot has continued to attract crowds with its classic setting, colorful regulars and lively concert performances, and it shows no signs of slowing down; indeed, an addled motorist drove his car right into Comstock in late 2014, and they were open again just a few days later.

More than any historic bar in the neighborhood, Comstock looks the part. Go there today and you’ll see that although the place has been given a once-over by the new owners, walking through the doors is still like stepping backwards in time. The original fan system, installed in 1916 and run with an elaborate set of belts and pulleys, is still in operation above the intricately carved bar. They employ period bar implements and antique barware, a nice touch, and the bow-tied bartenders of the staff lend a slightly theatrical element to the place.

And yes, the spittoon troughs are still in place at the base of the bar, but be advised: management frowns heavily upon their use.

Perhaps the most famous of all North Beach’s watering holes, Vesuvio was first opened in 1948 by Swiss immigrant Henry Lenoir. Perched just below Broadway on Columbus Avenue, to this day it’s renowned for the Beat poets and bohemians who used to habituate the neighborhood: along with Bob Dylan, Ginsberg, Kerouac and Cassady were all Vesuvio regulars in the late Fifties. Fellow Beat Lawrence Ferlinghetti opened his iconic City Lights Bookstore next door in 1953; the lane between the two was rechristened Jack Kerouac Alley in 1988. There’s probably someone strumming a guitar there behind an open case right now. 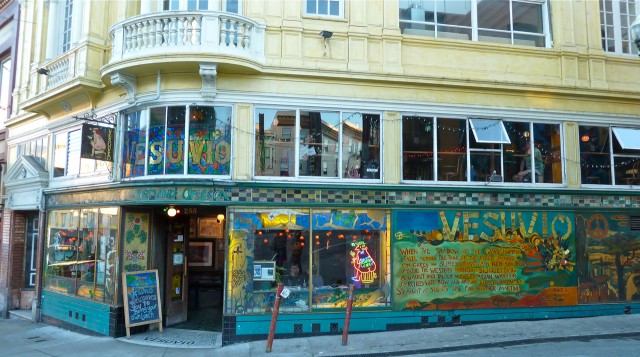 Now portraits of the Beats line the walls, along with those of the many locals who have haunted the space over the past 68 years. And the art: Lenoir was an art lover who always envisioned the place as a gallery as well as a bar, and that tradition has persisted. Local artists are well represented on Vesuvio’s walls, and there is always something new to see. Indeed, the place itself is a piece of art: resident artist Shawn O’Shaughnessy, who died in 1998, painted the iconic mural on the front exterior wall, and made myriad other contributions over the years. He created the tile work on the interior walls with notebook paper used behind the bar, painstakingly dyed, cut and placed. 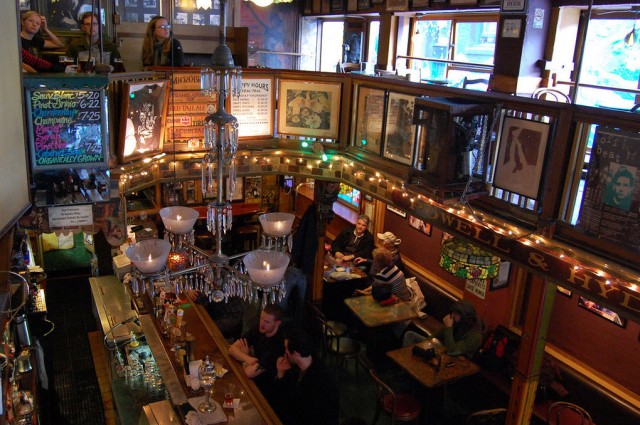 There is no food, but you’re welcome to bring some in, and the bar is always chockablock with locals and tourists alike. They sell a lot of drinks, but the main commodity here has always been talk, and there is no better place to strike up a conversation with a stranger – whether it’s with someone from halfway around the world, or halfway around the block. The bartenders are relaxed and friendly, most of them veterans, and the crowds are generally well behaved, especially given the place’s proximity to rowdy Broadway.

Side Note:  Vesuvio’s whimsical style of decor, a pastiche combining Tiffany lamps with antiques and kitschy touches of Americana, was later co-opted by national restaurant chain TGIFriday’s. They opened hundreds of eateries across the US, using what became the signature Friday’s “look.”

This article is part of a series examining the fascinating people and places that make up the rich history of North Beach and The Barbary Coast. Visit us again soon for more great content.