At Thursday’s Democratic debate in New Hampshire, Bernie Sanders and Hillary Clinton went head-to-head (sans third wheel Martin O’Malley) on the stage for the first time. It was a slugfest relative to earlier debates, signaling an end to the congeniality contest we’ve witnessed between the two frontrunners thus far. Until now, Clinton and Sanders have been mostly guarded in their criticism of one another – but not after the razor-thin margin in Monday’s Iowa caucus.

To their credit, the moderators (MSNBC’s Rachel Maddow and Meet The Press’ Chuck Todd) mostly got out of the way and let the candidates talk. Clinton wasted no time, putting Sanders on the defensive early on. “I really don’t think these attacks by insinuation are worthy of you,” she said, referring to Sanders’ criticisms of her campaign donors, which she termed an “artful smear.” The last comment drew a scowl from the Vermont Senator (and some surprising boos from the crowd), and he was quick to retaliate. “There is a reason why these people are putting huge amounts of money into our political system,” Sanders responded, arguing that the influence of corporate money was “undermining American democracy.”

For Bernie Sanders, that message runs right down the center of his platform, and it’s a message he has done extremely well with. A Quinnipiac poll released on Friday shows the race between the Democrats continuing to dramatically narrow: Clinton’s national lead has shrunk to two percentage points, and she now leads Sanders 44 percent to 42 percent. Compare that to her 61-30 lead in the same survey from December 22nd, and you’ll see how much things have changed in just six weeks. Favorability ratings for the two candidates are even more revealing: Sanders has the highest favorability rating of any candidate in the poll, Democrat or Republican (44 percent); factor in those who give him a negative rating, and Sanders’ numbers yield a net positive approval rating of +9. By comparison, Clinton has an approval rating of 39 percent, and a net negative approval rating of -17.

As we head into the New Hampshire primary on Tuesday, statewide polls are showing Sanders leading by up to 30 points. Seeking to explain the slanted field, most cite Sanders’ name recognition in New Hampshire, which borders his state of Vermont; due to proximity, Granite State residents have had more exposure to Sanders. While I see the point, it’s absurd to claim those voters have heard more about Senator Sanders than they have about Hillary Clinton;  the former Secretary of State has been a constant presence in Democratic politics for well over two decades. 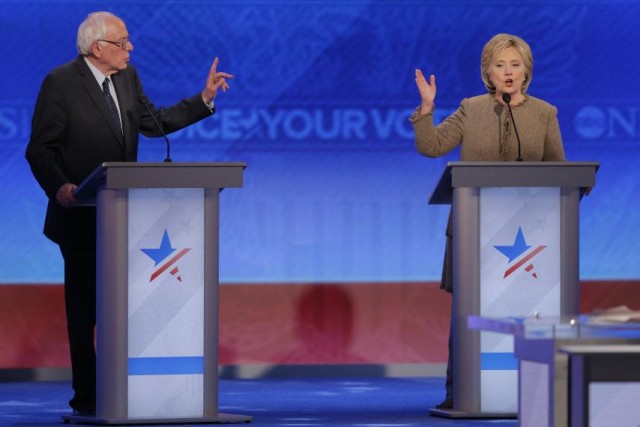 This suggests that name recognition is an entirely different bargain for the two candidates. Clinton has been on the receiving end of negative press and smears from the right for years now; while she is extremely well-known, her name evokes certain negatives in the public’s mind, Whitewater, Vince Foster, Travelgate and Benghazi among them. Manufactured or not, these scandals have been inextricably linked to Clinton for many voters. For Clinton, name recognition comes with some very onerous baggage.

Not so for Bernie Sanders. He has shown an ability to win over widely varying crowds with his message, and the Clinton campaign (and her good friend Debbie Wasserman Schultz of the DNC, sadly) hasn’t missed the significance of this. By scheduling only 6 debates this campaign season (there were twenty-five  in 2008) the DNC is effectively limiting the American public’s exposure to the Vermont Senator. And it appears to have been good political sense, if dirty pool: as the debates have raised Sanders’ profile, his popularity has soared. Judging by the polls, the more the public sees of the senator, the more they like him. Name recognition is nothing but a positive for Sanders’ campaign.

Unfortunately, the establishment media canard of “Sanders is unelectable” continues unabated. Cartoonist Tom Tomorrow’s Monday entry summed up their argument: asked by a newsman about the tight race, a democratic strategist replies “People should not vote for Bernie Sanders, because he cannot win. Unless of course they vote for him, which they shouldn’t.” Spot on.

On Thursday night, Clinton cannily tried to portray herself as a crusader against Wall Street corruption – just like Sanders – claiming the amount of money and effort spent by Wall Street lobbyists to prevent her election was proof of her bonafides. Of course, that doesn’t square with the $675,000 that she was paid by Goldman Sachs to deliver 3 (yes, that’s three) speeches. That’s an awfully cozy arrangement to have with a huge investment bank, particularly when Clinton would have us believe they are her sworn enemies. I’m not buying it, and I’m not sure American voters will either.

Hewing to his message, Sanders continued to frame Clinton as the “establishment” candidate, a tactic which earned the senator an interesting retort from Clinton: “Senator Sanders is the only person who would characterize me, a woman running to be the first woman president, as exemplifying the establishment.” This comment was puzzling; apparently, once you reach a certain stratum of national politics, all you must do to qualify as a progressive is lack a Y chromosome.

Unsurprisingly, Sanders had his hands full once the topic turned to foreign policy, Clinton’s wheelhouse as former Secretary of State. He should have passed on the moderator’s inane request to rate three regimes (Iran, North Korea and Russia) in terms of their threat to the US, which led to his weakest response of the evening. “Clearly North Korea is a very strange situation because it is such an isolated country run by a handful of dictators, or maybe just one, who seems to be somewhat paranoid. And, who had nuclear weapons,” he replied somewhat clumsily.

When Maddow flipped the topic to electability in the general election, the senator did markedly better, pointing to voter turnout as his secret weapon. “Democrats win when there is a large voter turnout, when people are excited,” Sanders said. “When working people, middle class people and young people are prepared to engage in the political process. Republicans win when people are demoralized.” Pointing out that he does better head-to-head against Trump in the polls than Clinton, Sanders argued it’s his campaign that is creating the kind of excitement that galvanizes voters. “I think our campaign is the one that creates the large voter turnout and helps us win,” he concluded.

The award for the softball of the evening went to Chuck Todd, who fielded a doozy to Hillary. He started off on a tough note: ”All right, Madam Secretary, there is an open FBI investigation into this matter about how you may have handled classified material.” But then Todd crumpled. “Are you 100 percent confident that nothing is going to come of this FBI investigation? Of course, Hillary responded that she was – “100 percent.”

Way to hold the candidate’s feet to the fire, Chuck. Did they teach you that at Meet The Press?