As one of the original neighborhoods of San Francisco, North Beach has always been steeped in its own rich history. Though we sit at the center of a thoroughly modern city, our enclave somehow feels more like a cloistered European village. Our past is on display all around us, and it’s nearly impossible to live and work here without being keenly aware of those who came before.

Like the timeless Saints Peter and Paul Church that dominates our central square, our organizations are a reflection of that storied past. Founded in 1917, the San Francisco Italian Athletic Club (SFIAC) is one of the neighborhood’s oldest. A fraternal organization and thriving events center, the SFIAC has been an integral part of North Beach for over a century, hosting cultural and community events of all kinds for generations.

Today the club boasts over 650 members, and its rolls continue to expand. But although it occupies a prime space on Washington Square Park (and next to the Post Office, no less), many of San Francisco’s newer arrivals are unaware of the club. Having attended some great happenings in the space over the last few years, including a full-blown three-card boxing event, I thought it was time to investigate further.

Last week, I sat down with SFIAC’s Chief Operating Officer Nicolas Figone to talk about the club and its unique position in the North Beach community. Our conversation is reproduced below.

Joe Bonadio: The San Francisco Italian Athletic Club is one of the oldest clubs in the city, from what I understand.

Nick Figone: We are 103 years old, and the oldest Italian club in San Francisco. We’ve got a long history and deep roots in North Beach–and we weren’t always called the San Francisco Italian Athletic Club. We came to be as the result of a merger between three Italian athletic clubs: the Virtus Club, Unione Sportiva, and Sporting Club Italia.

They had their respective clubhouses in multiple locations in North Beach. Unione Sportiva had a spot on Powell Street where the Cathay American Legion post is now; there was also a clubhouse on Columbus and Green, where the Bank of America branch is today. Sporting Club Italia and Virtus Club merged initially in 1925, and their headquarters was at 415 Broadway. 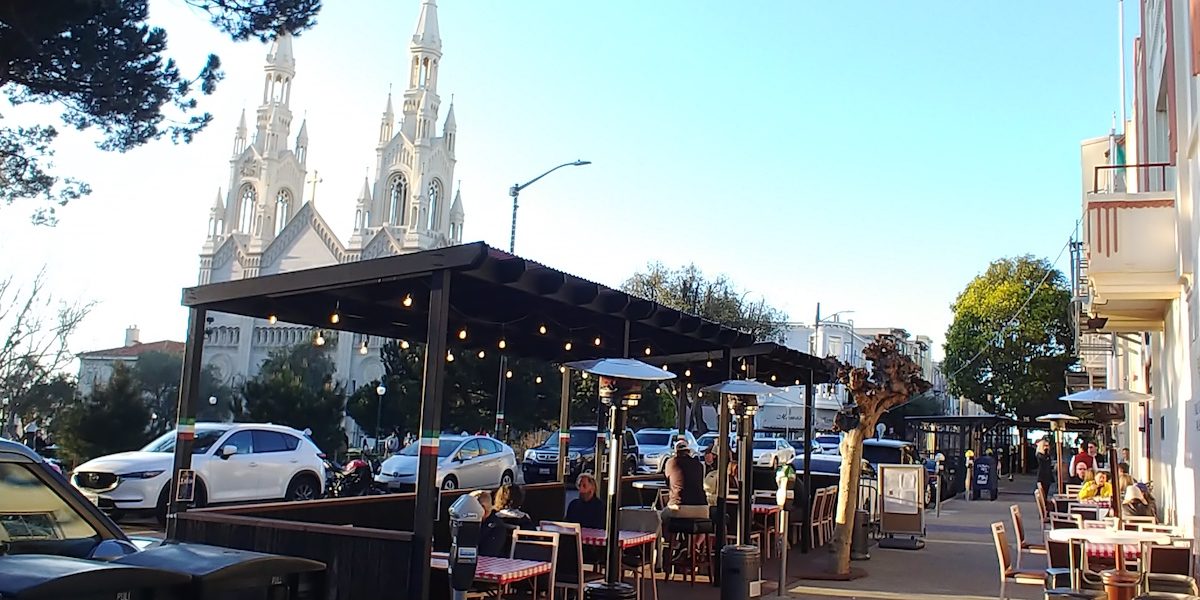 NF: U.S. Restaurant is named after Unione Sportiva, but I think the club may have been gone by the time the restaurant opened.

JB: The restaurant actually claims to date all the way back to the 1890’s.

NF: Well, you’d definitely have to talk to (U.S. Restaurant owner) Al Cipollina about that!

In any case, we didn’t start out as the San Francisco Italian Athletic Club. But over time, these different clubs decided to merge, and to make this location we’re sitting in today our permanent clubhouse. 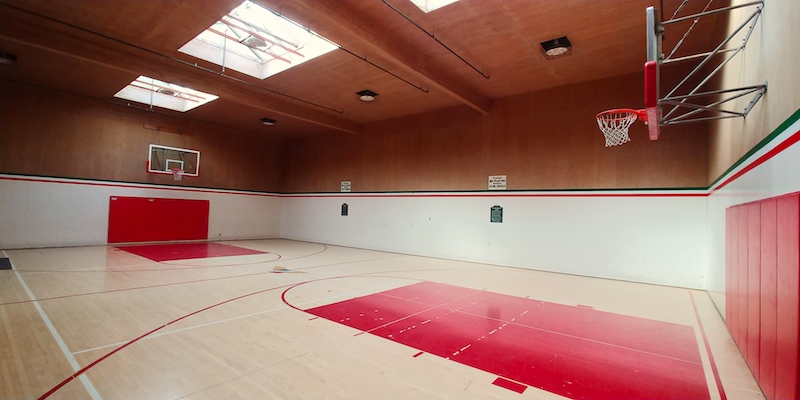 Not to be outdone, San Francisco Athletic Club has something for the ballers out there. | Photo: Joe Bonadio

JB: So how long have you been in this spot?

NF: This location was built specifically to be the home of the Italian Athletic Club, and it was opened in 1936.

So it was through the history of these athletic clubs competing against each other–in footraces, boxer, soccer, basketball, you name it–that the SFIAC was born.

JB: So Virtus and Unione Sportiva were rival clubs?

NF: Yes, very much so. As you can see on the old documents, the name actually changed a few times before it settled on San Francisco Italian Athletic Club. There was also a period of time during World War Two that they dropped the Italian from the name because of anti-Italian sentiment. 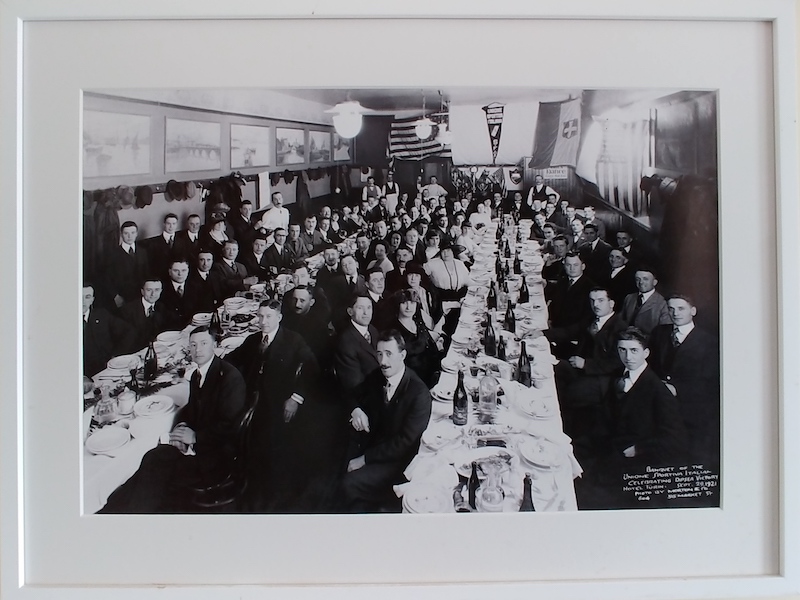 JB: The club has evolved over the years to be more than just an athletic organization.

NF: Yes. We still have an athletic focus with our onsite facilities for members:  basketball court, weight room and fitness center, steam room, showers and locker room. So the guys can come in to work out here.

We have athletic teams, including two professionally coached soccer teams that play in the San Francisco Soccer League, itself a historic San Francisco institution. We’ve also got intramural teams: softball, bocce, cycling. So we’ve still got our athletic focus.

One of our longest traditions is the annual footrace that we organize, called the Statuto Race. 2020 would have been the one hundredth running, and we’re planning to do it this year as the official one hundredth.

It’s interesting–I found out the only time the Statuto Race was postponed before Covid was during World War Two.

JB: Even for a club with such a long history, bringing in new members is important. Do you find that membership runs in the family–if your father was in the club, you’ll be in the club?

NF: Certainly, we’ve got a rich legacy membership. We have new members whose grandfathers or even great-grandfathers were part of our organization, and see it as part of their own family traditions.

In terms of bringing in new members, we’ve done a great job. Between outreach on social media and the website, and the work of our membership committee, we’ve found a wonderful mix of new members. Many are Italian-Americans who were born here, or have relocated to the Bay Area like so many people. We also attract Italians arriving  here from Italy, who perhaps have come to work in Silicon Valley, or try their hand in the restaurant industry.

JB: We do bring in a fair amount of Italian expats in North Beach, so that makes sense. It sounds like your membership is a pretty lively mix.

NF: It is unique, and it’s a real mix of generations. We have World War Two veterans in their mid-nineties who are still coming to our events. And we’ve got Generation Z members, many of whom are new to San Francisco, who have Italian lineage and want to make a connection with that part of their history.

It’s natural. It’s a great place to come to meet people, especially when you’re new to the city. 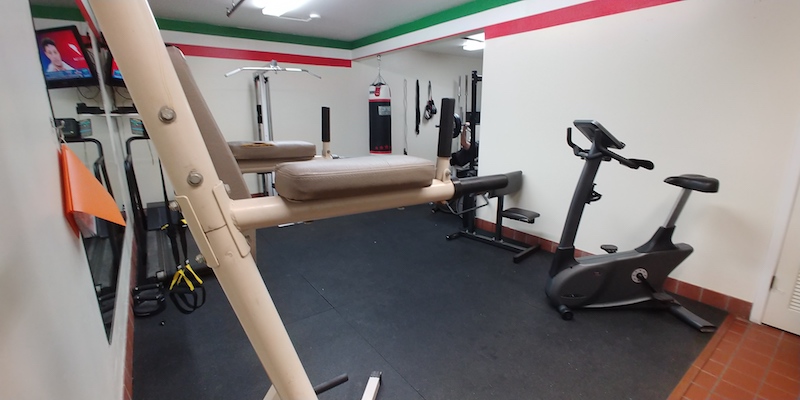 All members of SFIAC have access to a fully equipped gym, showers and locker room on premises. | Photo: Joe Bonadio

JB: So the rule is, one of your grandparents must be of Italian origin.

NF: Not at this point.

NF: We’ve actually just completed phase two of our capital improvement project. The first phase was the entryway, the lobby and restrooms for our grand ballroom. That also included permanent ADA access and all the ADA upgrades for those portions of the remodel.

Phase two was done during the pandemic, and that consisted of a major cosmetic overhaul and refresh of the grand ballroom. We took down and replaced all of the walls, upgraded the electrical for AV and performance, and installed acoustic paneling throughout the ballroom for sound.

That’s in addition to a new hardwood floor, new bar face, new lighting, as well as mahogany wood treatment throughout the ballroom. 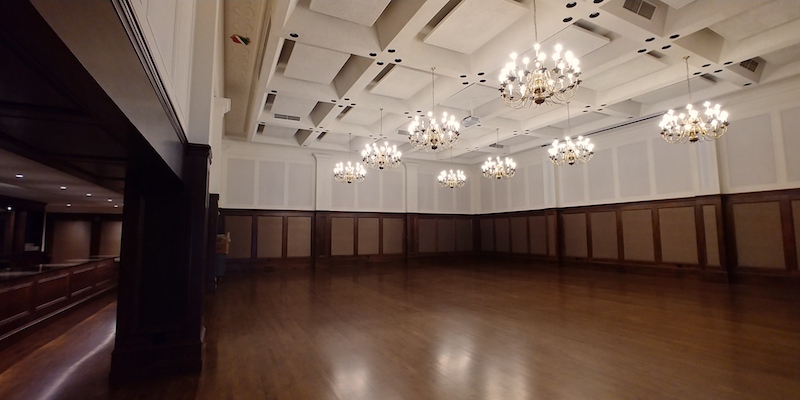 NF: It was big. And in retrospect, it was the perfect time to do this. We had the plans and all of the renderings, and all that we needed was time to do it.

And boy, did we ever have time! (laughs)

JB: That’s for sure. I’ve been to some memorable events at the club over the years, including the incredible boxing event that you guys threw with Tony [Gemignani, of Tony’s Pizza Napoletana]. Do you plan on doing that kind of thing again?

NF: Well, the beauty of our space is that we truly are an events center. So anyone who would like to throw an event is welcome to come to us with their ideas. We make events happen, and that really is our specialty.

Whether it’s a boxing match or a wedding, we are here for it. That event space is now ready for anything. 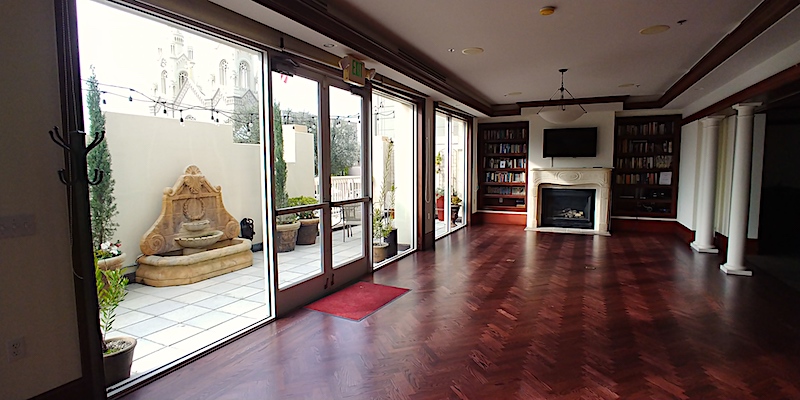 JB: And that wasn’t the only thing the club got up to during the pandemic: you also built yourself a brand-new parklet on Stockton Street.

NF: We did. I would say that the pandemic has made us very public-facing. Certainly our event space is open to the general public, who are welcome to take advantage of our full bar, in-house catering and all the amenities. But we have traditionally been a private club with membership–and since the pandemic we are doing food and drink for anyone who comes out to support us.

To facilitate that, we constructed a parklet like many in the neighborhood did. A member who happens to be a general contractor did it for us, and he did a wonderful job. It’s sturdy, it’s to code, and I’d like to think it’s one of the nicest in the neighborhood.

Our new concept was born out of the pandemic: Porta Via, which means to-go in Italian. Initially we were reduced to to-go food, but as the city changed its guidelines, we’ve been able to put tables and chairs outside. Now people can sit and enjoy a lovely Italian meal and a cocktail.

JB: And you’ve never been able to do this before.

But we’ve never served outside–with the exception being the annual Italian Heritage Parade, or something like the Festa Coloniale, which is out on the street. But short of those two days each year, everything we’ve done has typically been indoors.

JB: How has the neighborhood responded to the new offering?

NF: Even to this day, ten-plus months into our outdoor dining journey, we have people in the neighborhood coming up to us with all kinds of questions about who we are, and what we do. They are really excited to see our club activated in a way that is publicly accessible. People tell us they’ve walked past the club for ten years, and never had any idea of who we are.

We’re hidden in plain sight, I like to tell people. And it has been great to engage with the neighborhood this way, and to educate them on our organization.

The average stay in San Francisco is about three years. There is a constant flow of new people coming in to the city, and they don’t know about us. That’s a challenge for any business, let alone a 103-year-old neighborhood institution.

JB: To a degree, it seems being forced outside might be the best thing that ever happened to the club.

NF: It certainly helped us with awareness and outreach to the general public. I hope that it translates to new membership, and to more events. Now that people know the club has been transformed into such a beautiful facility, we’re hoping they’ll ring our doorbell, and book a private event with us in the future.