Located at the bustling nexus of Chinatown, the Financial District and Fisherman’s Wharf, San Francisco’s North Beach neighborhood has long been a food destination. As our city’s designated Little Italy, North Beach is a magnet for sightseers, and that foot traffic has insured a steady flow of new chefs for decades. Truth be told, an overemphasis on “red sauce” Italian, especially on the main drag of Columbus Avenue, has at times given the neighborhood a spotty reputation among foodies, and we’ve gone through some fallow times.

But North Beach has bounced back, and our little burg is jam-packed with good food – now more than ever. Starting with the quiet bombshell of Gigi Fiorucci’s Sotto Mare in 2007, North Beach has experienced a culinary renaissance. In recognition of the amazing work being done by our inspired restaurateurs, I’ve compiled a list of 10 things to eat in North Beach – right now. 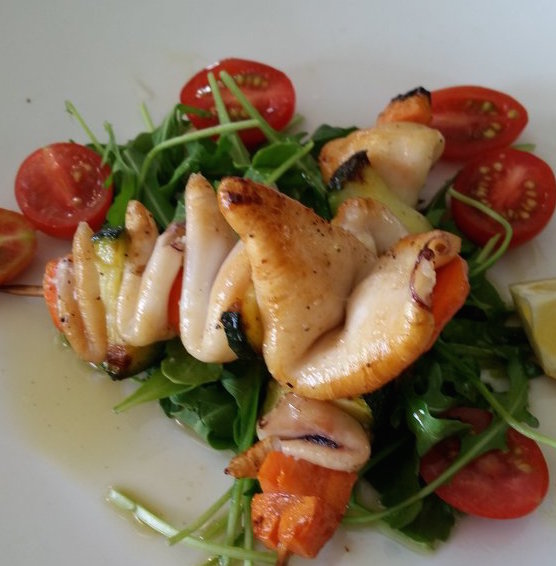 beautiful Stefano Ferrara Italian wood-fired oven. Their opening in 2014 upped the ante on  Columbus Avenue: they bake some of the best Neapolitan pizza you’ll find anywhere, and their Norma pizza with eggplant and basil could easily have made this list. Today’s highest praise, however, is reserved for the Calamari Spiedini. Perfectly fresh calamari is skewered, popped in the oven for a mercifully short interval, and removed just when the edges threaten to catch fire. The result? Exquisitely tender calamari, redolent with the smoke of the wood fire. It will make you want to punch the next person who offers you fried calamari.    348 Columbus Avenue

Benita’s Baccala – Gigi’s Sotto Mare
Let’s not mince words: Sotto Mare is nothing less than a godsend. The best thing to happen to North Beach in the decade I’ve been here, Gigi’s sets the bar for seafood in San Francisco, and it’s no surprise they’ve become one of the city’s most popular dining destinations. Fresh is the key word: walk by in the morning, and you’ll see the fishmongers making their first stop of the day. Sotto Mare always gets dibs, so if it’s on their special board, rest assured it’s the best you can get. Benita’s Baccala is dried salt cod, stripped from the bone and cooked in olive oil, tomatoes, capers and black olives (along with a few proprietary spices the family is unlikely to ever divulge). Served with fresh bread, the dish has a depth of flavor that is so satisfyingly Italian  that I never start a meal there without it.   552 Green Street

Chubby Fried Chicken – Chubby Noodle
When Pete Mrabe was building his Chubby Noodle popup inside of Amante on Green Street, he used to walk around the neighborhood with a bucket of freshly fried chicken, beta-testing his recipe on the locals he hoped to turn into customers. The bird was delicious from the get-go, but it kept getting better each time, until Chubby was finally open and serving. Now Chubby Noodle has its own digs around the corner on Grant (and a spot in the Marina, and Amante is Pete’s….but that’s another article). Meanwhile, the Chubby Fried Chicken is still the go-to: buttermilk brined, seasoned with a hint of Chinese 5-spice, and fried to crisp, juicy perfection, it’s diabolically good. And though the creamy sambal it’s served with is not a controlled substance, it probably ought to be.   1310 Grant Avenue

Cast Iron Pizza – Capo’s
Tony Gemignani is a pizza overachiever. You may have read that he won the World Pizza Cup in Naples, the first non-Italian pizzaiolo ever to do so. That’s very impressive, but that isn’t even what I’m talking about. If you’ve visited his places, you‘ve probably noticed: the guy is obsessive. His menu at Tony’s Pizza Napoletana is nothing short of biblical; there is no pizza you have ever encountered that isn’t coming out of this kitchen. The man has seven different types of pizza oven. Tony’s Napoletana is a great pizzeria – but my favorite of his pies comes from Capo’s, his sister establishment around the corner on Vallejo Street. Though Capo’s specializes in Chicago deep dish style, they also give you lots of choices, and my favorite is the Cast Iron Pan pizza. This delectable pie spends the perfect amount of time in the oven, resulting in a toothsome, medium-thick crust that can stand up to whatever toppings your gluten-addled mind can dream up. It’s a gut-buster of a pie too, so come hungry – or better yet, bring a friend. Buon Appetito!   41 Vallejo Street

Sacripantina – Stella Pastry & Cafe
Stella Pastry has been a staple of North Beach life since opening in 1942, baking some of the finest Italian pastries that you can get anywhere. When they were purchased by one of their bakers years back, he decided to change nothing, so many of the recipes they follow haven’t changed in in 74 years. Sacripantina, Stella’s specialty, is a decadent sponge cake made with rum, cream and zabaglione (a light custard made with egg yolks, butter, sherry and marsala wine). It’s pastry for someone who normally doesn’t eat pastry, delicate and only-so-sweet, the perfect accompaniment to an afternoon espresso. They also sell a full-sized version, so bring one to your next party and knock everybody out.  446 Columbus Avenue

Iron Skillet Roasted Mussels – Rose Pistola
Rose Pistola has had a distinguished run in North Beach. Coming onto the scene in 1996, Rose shot into the stratosphere when they snared the James Beard Award for Best New Restaurant in America. To be sure, that kind of hyperbole would embarrass anyone, but its clear that all these 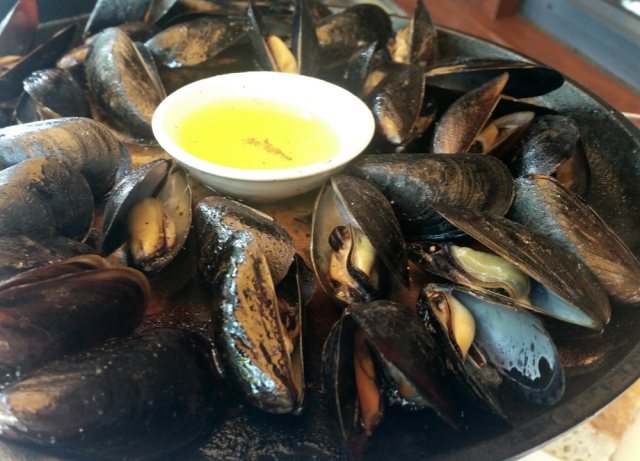 years later, there is still a lot to like about Rose Pistola. Case in point: the Iron Skillet Roasted Mussels. Coming out of the open kitchen on a sizzling, smoking pan with a ramekin of drawn butter, these babies are some of the tastiest I’ve had outside of Europe. They are served with some of the finest housemade focaccia in the city, perfect for cleaning up the fragrant pan. The servers can be a bit parsimonious with the focaccia, but ask for seconds anyway – they’ll get over it. Mangia!  532 Columbus Avenue

Pizza Margherita – Ristorante Ideale
When Maurizio Bruschi opened Ristorante Ideale in 2003, it was immediately embraced by the North Beach locals, and it still may be the best overall Italian restaurant in the neighborhood. Ideale gets everything right. Their Caesar salad is a standard bearer, their homemade pastas are consistently fabulous (try the tortellini with marinara instead of cream sauce), and the pizza….oh, the pizza. Ideale’s Pizza Margherita is a classic Roman pie, dollops of creamy mozzarella and basil leaves atop an uncrowded canvas of fresh tomato sauce and thin, crisp crust. It’s a lighter pie than the Neapolitan version, so one pizza makes a perfect appetizer for two or three diners. Yes, that means you can still have the tortellini.  1309 Grant Avenue

Ravioli – The Italian Homemade Company
When Mattia Cosmi opened the first Italian Homemade Co. shop around the corner from my apartment in North Beach, I felt the same way I did when the dispensary opened on that same block back in 2007. Wow, I thought, What could I have possibly done to deserve this?  (Okay, 2007 was a long time ago. Don’t judge.) Anyway, I love the Italian Homemade Company. The first retail store in San Francisco with its own full kitchen, they turn out delicious fresh pasta every day. Piadine (flatbread sandwiches) and pasta are served to-order, both inside and at a couple of sunny outdoor tables. And pasta is always in the case, ready for take-home: fettucine, tagliatelli, gnocchi, all right there. If you need sauce, they have plenty of that, too. These guys are nothing but Italian, and you’ve never eaten Italian food this good at your place. Though it’s tough to single out one thing, I am especially fond of IHC’s Ravioli. These are the best you can buy, and they have versions with cheese, beef and other meats, depending on the day. Grab a bag, pick a sauce to go or make your own (I like fresh sage and brown butter with reggiano parmigiano), and you’re ready to eat like the pontiff in your very own apartment.  716 Columbus Avenue

Deep Fried Salmon Roll – The House
When I tell people about The House, I back up a step, because I get very excited about certain items and tend to oversalivate. There are the house-pulled wasabi noodles, which are every bit 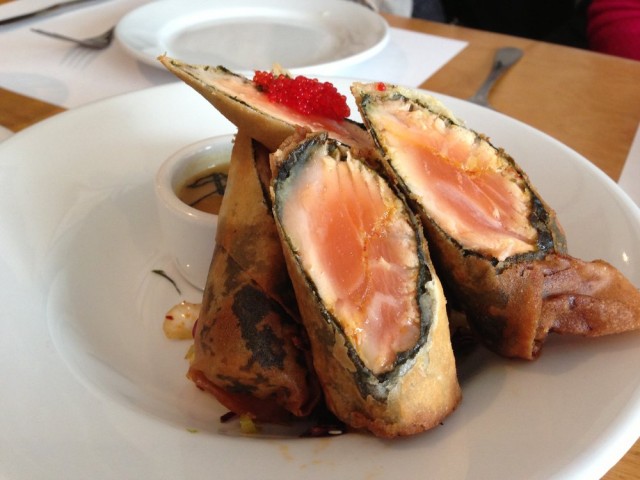 as good as they sound on paper. And there is the stellar grilled pork, which is served with the aforementioned noodles – well, you can just imagine that. Ditto the Kurobuta pork chop. Again, not an easy call, but in this house I’ve got to give it up for the Deep Fried Salmon Roll: fresh, sushi-grade salmon encased in a gossamer thin wrapper and expertly deep-fried, the flesh still flaming orange in the center. Served with hot Chinese mustard, this is a beautiful thing to behold. And then devour.   1230 Grant Avenue

Strudel Con Pasta Fatta In Casa – Albona Ristorante
A hidden gem that has been showing up on top 50 lists for decades, Albona is the only Istrian restaurant on the West Coast. A peninsula on the Adriatic Sea currently divided between Croatia, Italy and Slovenia, Istria has a unique cuisine that shows elements of all three. The Strudel Con Pasta Fatta In Casa is a rolled pasta stuffed with Lapp cheese and prosciutto, and baked in a casserole with béchamel, bread crumbs and a tomato cream sauce. This dish is beautifully rendered and one of my favorite pastas anywhere. It also obviates dessert, as well as breakfast the following morning. Albona is pretty intimate, so it’s a great place to take a quiet date, or your parents if you really like them. Pro Tip: take your servers advice on the wine, they know their stuff. And pick up the check, both dates and parents love that.   545 Francisco Street