These days, it’s almost undeniable: San Francisco has become America’s preeminent food city. But as much as San Francisco is renowned for its food, many of our culinary charms can feel inaccessible at times. Whether it’s the rising expense, the difficulty of landing a reservation or simply the need to make time for an elaborate multi-course meal, the trappings of fine dining can be onerous. And often, these factors can sap the enjoyment from the food experience.

I think this is one of the reasons people love North Beach so much. Here, simple pleasures are the order of the day. It’s a given: any walk around The Beach is invariably punctuated with good food and drink. It might be a perfectly fresh Italian pastry or a quick slice of pizza, an icy craft beer or a carton of handmade chocolates. Everyone who comes to this neighborhood has a little list in her head. Don’t believe me? You probably haven’t been here yet.

But with all of the choices, you’ve got to know what’s good–and what’s better. It can be a little overwhelming, especially for a newcomer, and of course we’ve got plenty of those. So every once in a while, I like to put together a list of 10 Things To Eat In North Beach Right Now. It’s coming up on lunch, so let’s get started, shall we?

Indian food is always a special treat, and since 2014, North Beach has had a reliable source on its northern edge: Curry Leaf. This spot is a gem, and they serve a full menu of Indian and Pakistani dishes, including a delicious lamb biryani. They also offer one of my current objects of obsession: Dal Makhani. A black lentil stew with a smoky, bewitching spice, this is one of the best things I’ve consumed recently. Of course, like many special things, it’s limited. But though it’s not on the regular menu, I have it on good authority they serve it all the time.
Curry Leaf, 943 Columbus Avenue

I spend lots of time out and about in the neighborhood (research doesn’t do itself, kids) and one of my frequent haunts is Belle Cora on Green Street. North Beach’s only real ‘wine bar,’ they’ve also got a solid craft beer selection, along with a menu of various small bites. With their central location and great patio, BC pulls in locals and tourists alike, with jazz on Tuesdays (Jose Simioni, currently) and a lively open mic on Thursdays. But this isn’t a music article, and Belle Cora also has something you don’t see often: authentic Raclette. A Swiss dish that involves heating cheese under an element until it browns, then scraping off the melted part (in this case, on top of potatoes, pearl onions, cornichons and corned beef), it’s a gooey triumph. Mondays and Saturdays from 6:30pm-10pm
Belle Cora, 565 Green Street 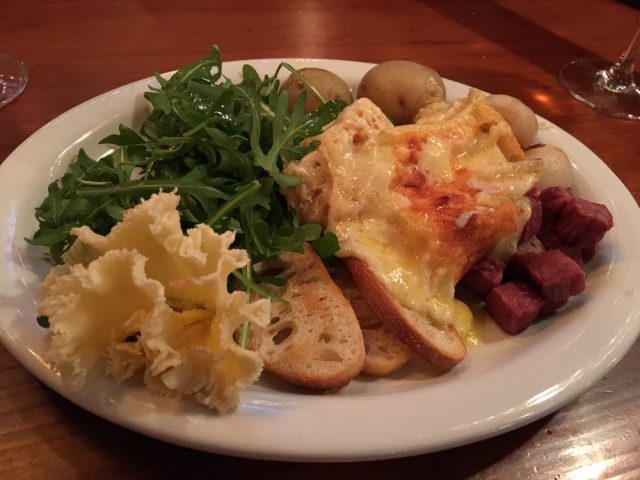 Anyone who reads the blog knows I’m a sucker for good Mexican food–and especially for Panuchos. This little taqueria packs a powerhouse punch, serving Yucatan-style Mexican that has been drawing the crowds down to Broadway for almost two years now. Everything is good here, no kidding, but my current favorite is the Shrimp Super Burrito. I’m typically not a shrimp burrito guy, but someone recently clued me in, and this thing is exceptional. The shrimp are cooked just right, and perfectly balanced by the flavors of the beans, rice, fresh avocado et al. Delicioso.
Panuchos, 620 Broadway

As one might expect, pizza fans crowd North Beach’s sidewalks like gluten-crazed cattle. And most pizza people have at least a passing familiarity with pizza’s doughy sibling, calzone. Essentially an inside-out pizza, calzone is great in the hands of a proper baker–and when that baker is Tony’s Pizza Napoletana‘s Tony Gemignani, it’s even better. Last Fall, Gemignani opened up Giovanni Italian Specialties on Union Street across from Washington Square Park, where he sells fresh pasta and lots of other Italian goodies. They’re serving an especially diabolical version of the dish: Deep Fried Panzerotti. Stuffed with meatballs, pancetta, ricotta and mozzarella cheese, this stuff beggars description, so I won’t bother. Just go get it–Saturdays and Sundays only.
Giovanni Italian Specialties, 629 Union Street 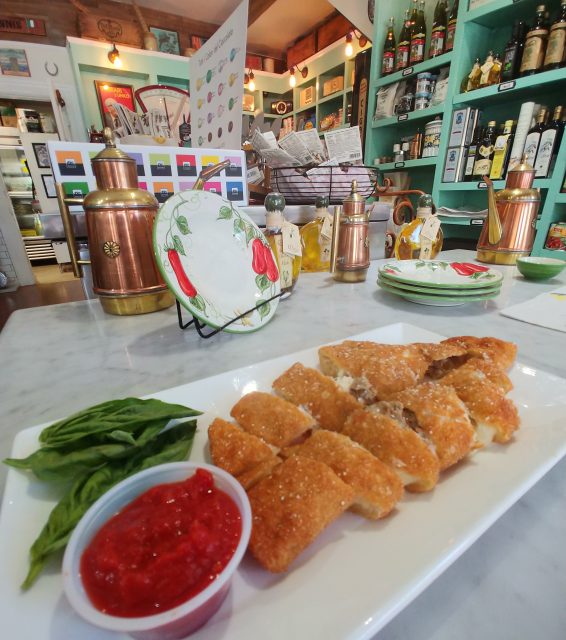 I tried, but so help me I can’t pick just one of the pastas Francesco Covucci is serving at his new Pasta Pop-Up on Green Street. The tangy tagliatelle bolognese, the rigatoni with cauliflower and calabrian chile, the linguine granchio with parsley and fresh crab….I’ve had them all, and every one hits the mark. The punchline? They all come in under $15. Pro tip: start with the arancina.
Pasta Pop-Up, 550 Green Street 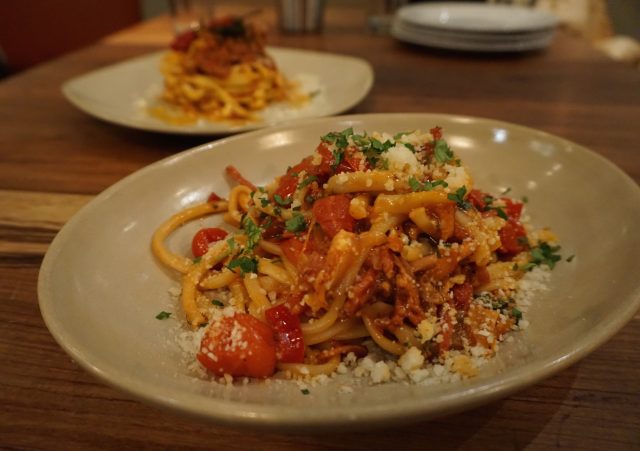 The deli sandwich is a crucial item in any neighborhood that claims Italian bonafides. We’ve always done pretty well in this category, but a lot of the old-school Italian delis have come and gone. Happily, Molinari’s is still kicking, but with the recent departure of the short-lived Central Station Deli, the sandwich game in North Beach has narrowed once again. One of the best: Alimento. For almost ten years, the shop has been quietly building a following, and today they’re a genuine neighborhood favorite. And in case that’s not reason enough to go, the place is owned by Shadi Zaghayar of Coit Liquors, who recently suffered through the horrible St. Patrick’s Day fire. To support your neighbors while they rebuild, be a hero and go pick up a sandwich. (And yes, they’ve also got a great selection of wine.)
Alimento, 507 Columbus Avenue 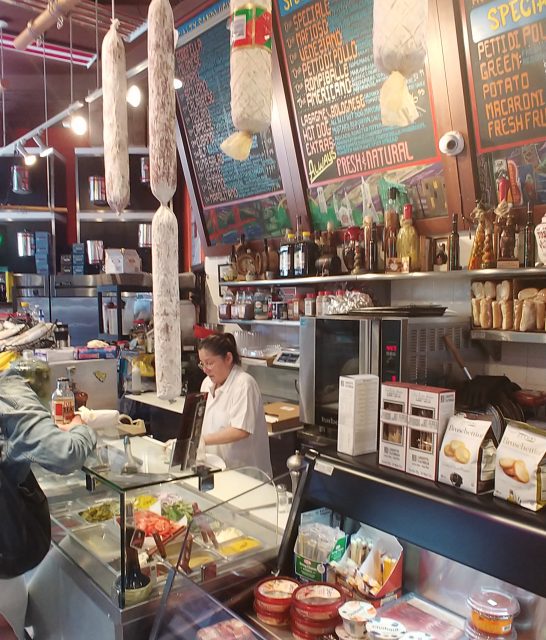 Foodwise, Sotto Mare may be the best thing to happen to North Beach since The House opened up on Grant Avenue in 1994. Serving only the freshest seafood, they cook in a simple Italian style that is hard to come by stateside. The entire menu is perfection, and the special board is the ideal point of entry. But one menu item in particular warrants special mention: the Scallop Sauté. The exceptional quality of the shellfish aside, the skill of the chef shows in the execution of this dish: the scallops come to the table tender and delicately browned, as fine as can be had anywhere.
Sotto Mare, 552 Green Street

One of the biggest restaurant projects to ever land in Chinatown/North Beach, China Live is a monster. It’s set to include two restaurants, a banquet hall, a large retail element and multiple bars, including a rooftop bar that’s still in the works. The ground-level Market Restaurant has now been open for a little over a year, and they’ve worked out the kinks in their ambitious menu, bringing it in line with the elaborately designed space. There are a lot of things to love on this menu, but the Dongbei Vegetarian Long Pot Stickers are a must-have. These babies only come out of the kitchen once every 20 minutes, but they are well worth the wait. Make sure to try them with the hot sauce.
China Live, 644 Broadway 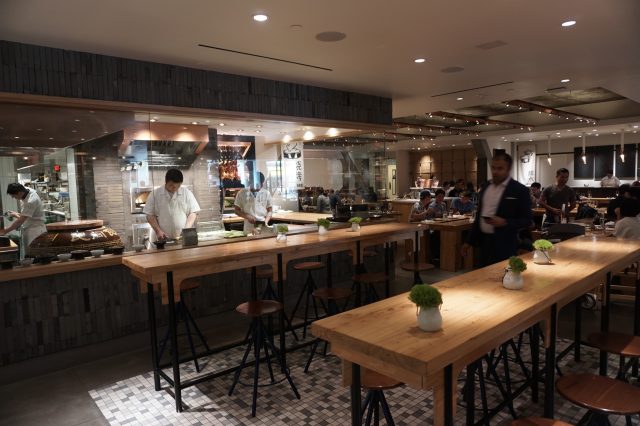 The Cheese at Little Vine

Cheese is a wonderful thing. Dietary restrictions notwithstanding, San Franciscans love their cheese, and for good reason. California makes a lot of the stuff, and we’re good at it–our state is second only to Wisconsin in cheese production. And when it comes to scoring some cheese in North Beach, one shop beats all the others: Little Vine. Opened in 2011 on a then-sleepy stretch of Grant Avenue, the spot has built a fiercely loyal following for its gourmet provisions and unique wines. And of course, the cheese. Whether its a clothbound cheddar, a piquant pecorino or an earthy robiola, they’ve always got something new and delicious in the case.
Little Vine, 1541 Grant Avenue

Last month, the Doors Open Project debuted in the former Washbag space at Powell and Union, a benefit for the employees of the businesses displaced by the St. Patricks Day fire. Piloted by Nick Floulis of Chubby Noodle and Elmer Mejicanos of Tony’s Pizza Napoletana, the spot offers a menu that is an homage to the affected businesses, and has quickly blossomed. A highlight is Mejicanos’ ambitious cocktail program, which holds more than a few surprises. One of his creations, the If You’re Not First You’re Last, is presented to the customer as steam shoots out of vents at the top of the glass. Pretty splashy visuals–and you’ll be happy to hear, it’s also delicious. Keep in mind these guys are only here until July, when they’ll close to remodel the space, soon to become Lillie Coit’s. Remember, 100% of the proceeds go to the victims of the fire, so get in there while you can. Cheers!
Doors Open, 1707 Powell Street 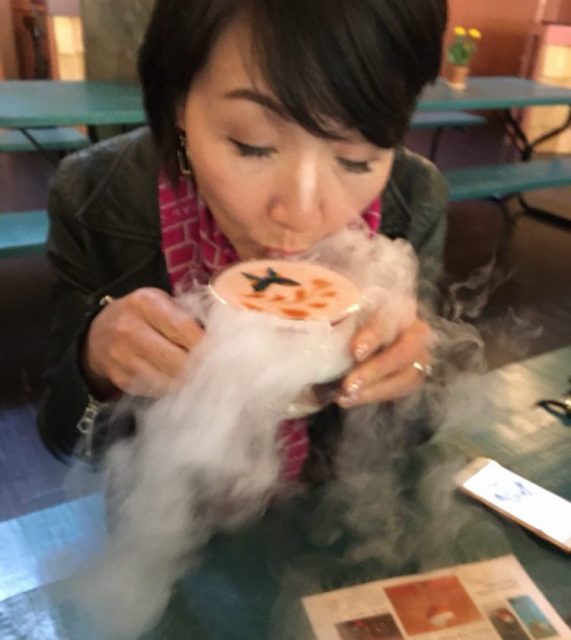