If there is any one neighborhood in San Francisco known for its parties and celebrations, that neighborhood must be North Beach. Since the days of the Barbary Coast, this well-situated parcel of land has always been at the center of the action, and our streets have crawled with revelers since well before they were ever paved. Indeed, our neighborhood’s reputation for drinking and debauchery is legendary, both in America and abroad.

So when it comes to throwing parties, North Beach definitely knows how to do it. And though it would doubtless strike some as odd, many of the best parties held in this neighborhood actually take place….at a church. Of course, I’m referring here to the sprawling crab feeds hosted every winter by the venerated Salesian Boys & Girls Club. 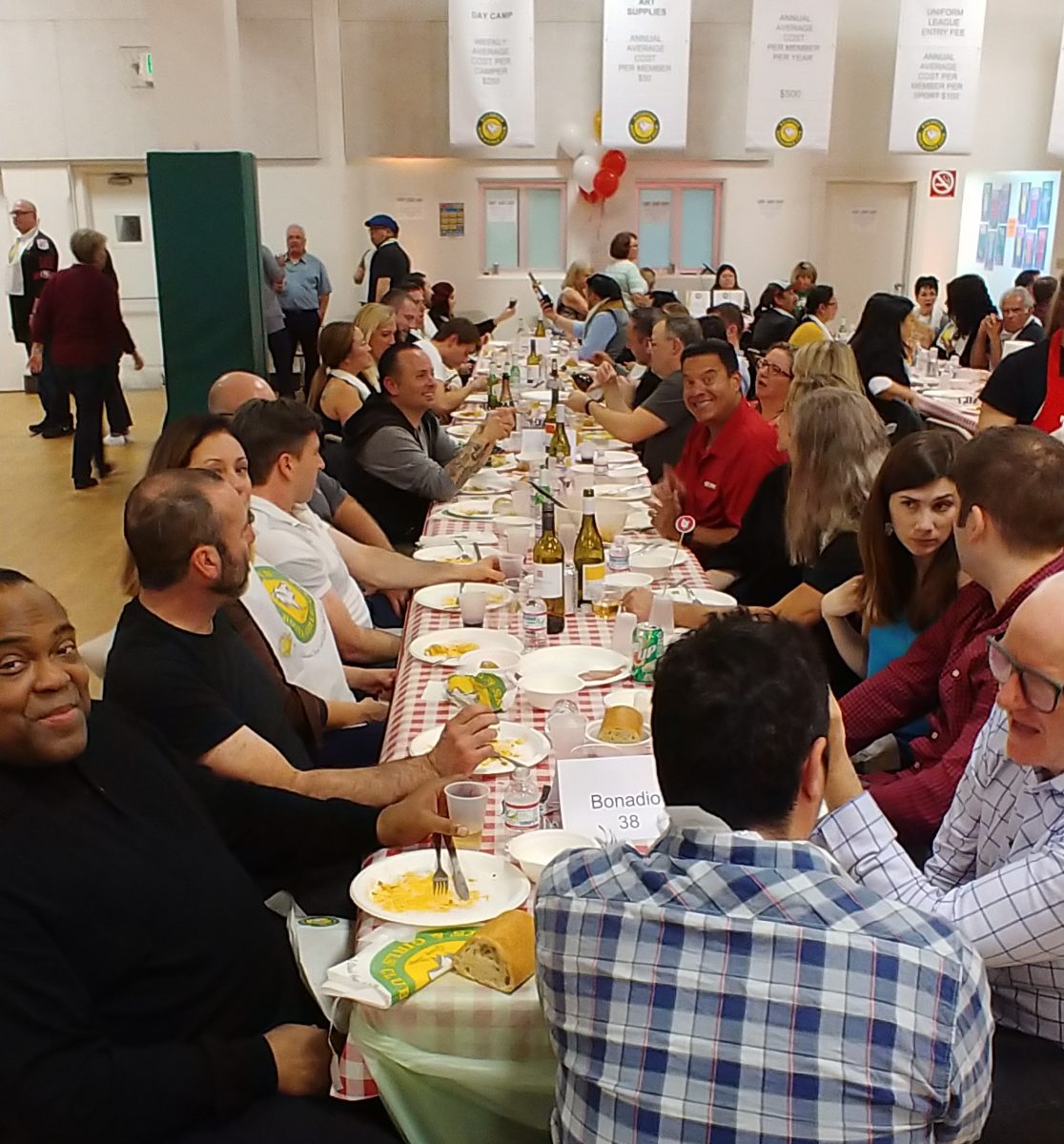 My table at the Salesian crab feed grew to over 35 hungry people this year. | Photo: Joe Bonadio

These events are hotly attended, and they are huge. Typically between 600-650 people crowd the gymnasium at Saints Peter and Paul Church to wolf endless plates of pasta and buckets of fresh crab—along with plenty of adult beverages to wash it all down, naturally. In my book, there is no bigger or better North Beach throw-down. And they hold four of these every year. The feeds and a host of other events bring in a bundle of money for the Club and its membership. 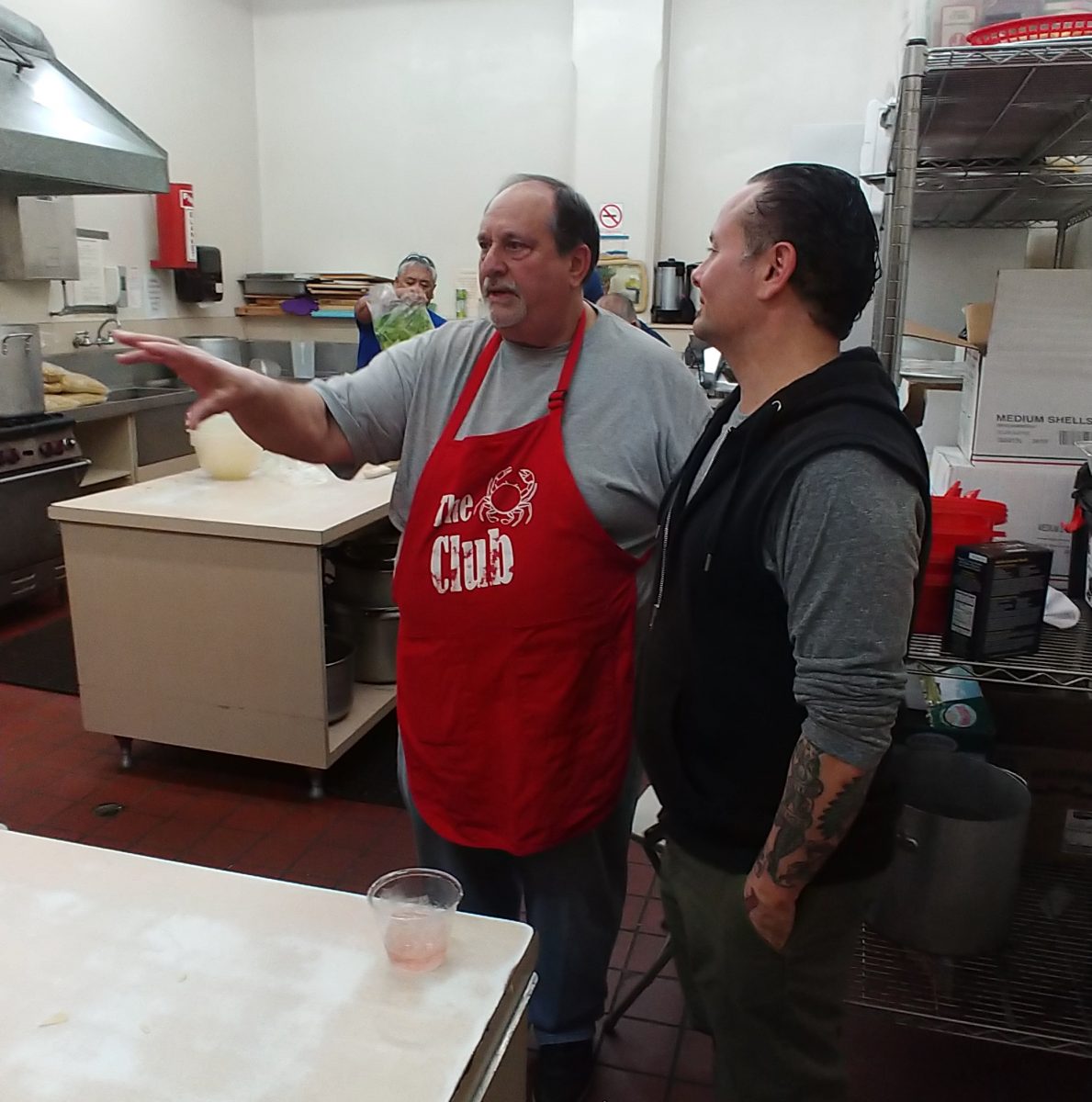 And as far as that goes, you can’t find a better organization to get behind: the Salesian Club acts as second home to hundreds of K-8 kids every year, offering athletics and classes of all kinds, along with the mentorship and community that young kids need when they are coming up. And believe it or not, any kid can get an annual membership card for just ten bucks.

But this arrangement requires some fundraising….and that’s where the crab feeds come in. Rich Azzolino, owner of Green Street’s perpetually thronged Sotto Mare, has been running these events ever since they let him into the kitchen. Rich has been in the restaurant business for a very long time, and for him, feeding six hundred people isn’t much more complicated than feeding six. As he explained to me, it’s just a matter of doing the math. And of course, a lot of groceries. 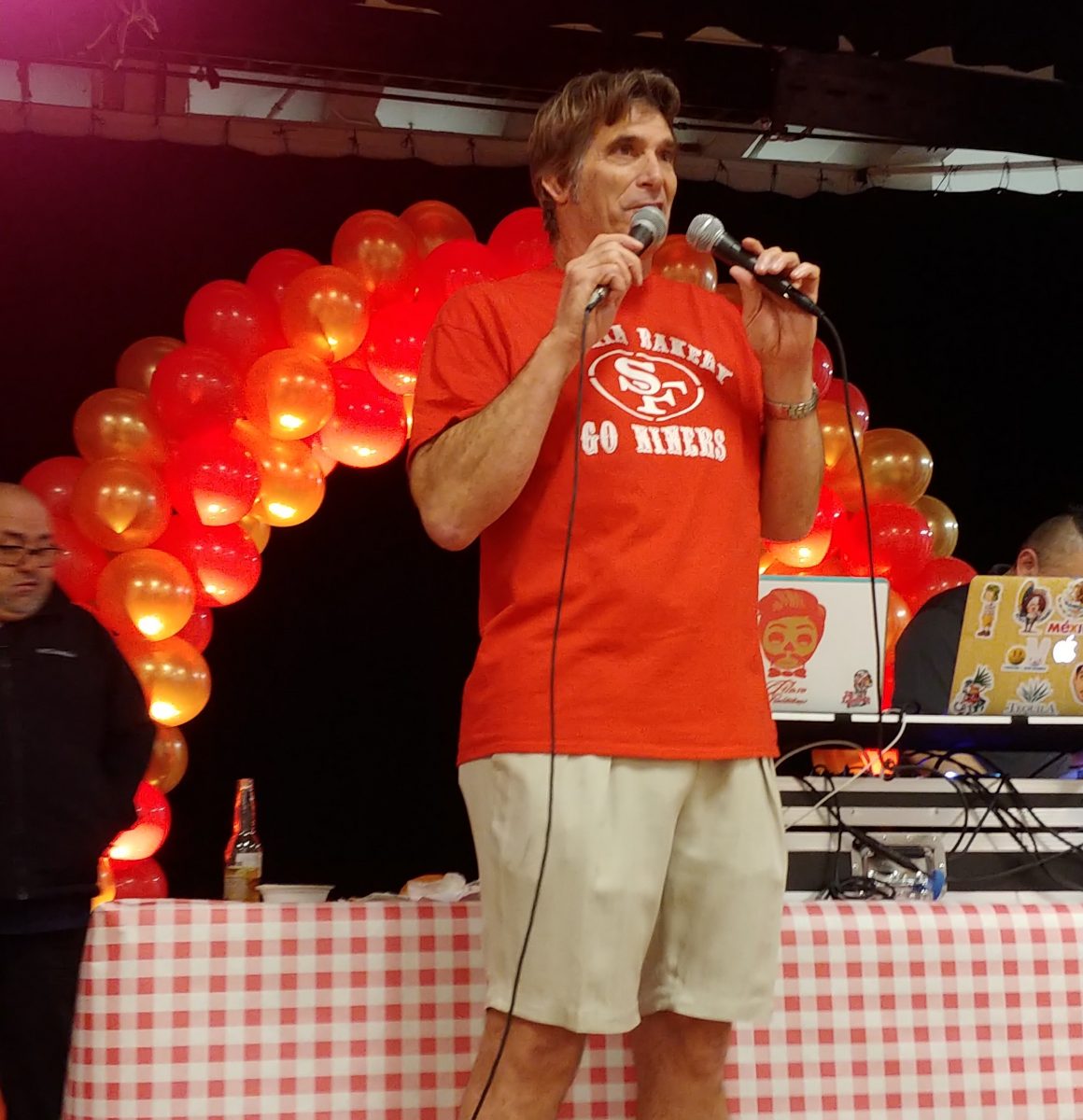 I do mean a lot: according to the chef, his kitchen goes through fully 2,200 pounds of crab at every one of these events. Traditionally, the crab has always been served with Sotto Mare’s famous cioppino brodo, a richly spiced tomato gravy. But Rich offers a second iteration alongside the first. It’s served cold, in a simple marinade of garlic and oil. (Full Disclosure: the Marinated Crab is my favorite).

Fortunately, patrons of Sotto Mare will soon be able to enjoy the marinated crab all season long: Rich just added it to the menu as a special, on Wednesdays only. That’s as convenient an excuse to visit as any. And the restaurant is looking especially sharp right now, having just received a spiffy new paint job in the traditional red, white and green of the Italian flag: the tricolore. 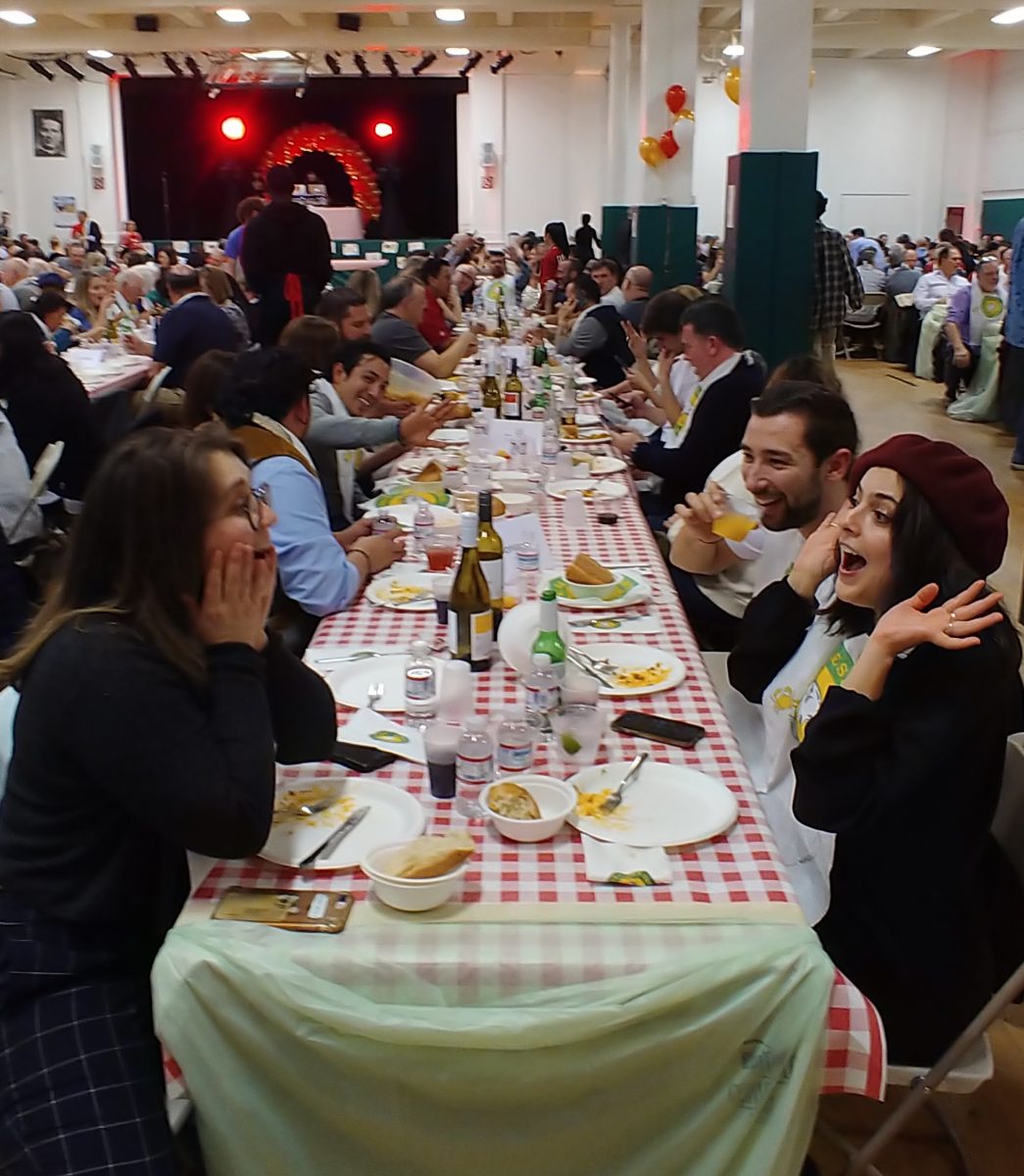 And better yet, after a protracted absence, the restaurant’s longtime mascot—the huge swordfish that adorns the top of the awning out front—has finally come home. The trophy fish had been down for a while, it’s trademark nose having been broken (not the first time that has befallen someone on Green Street). It had to be sent out to a local taxidermist for repair. And in a case of perfect timing, Sotto Mare’s prize swordfish was returned to its perch just in time to complement their new Italianate paint job. 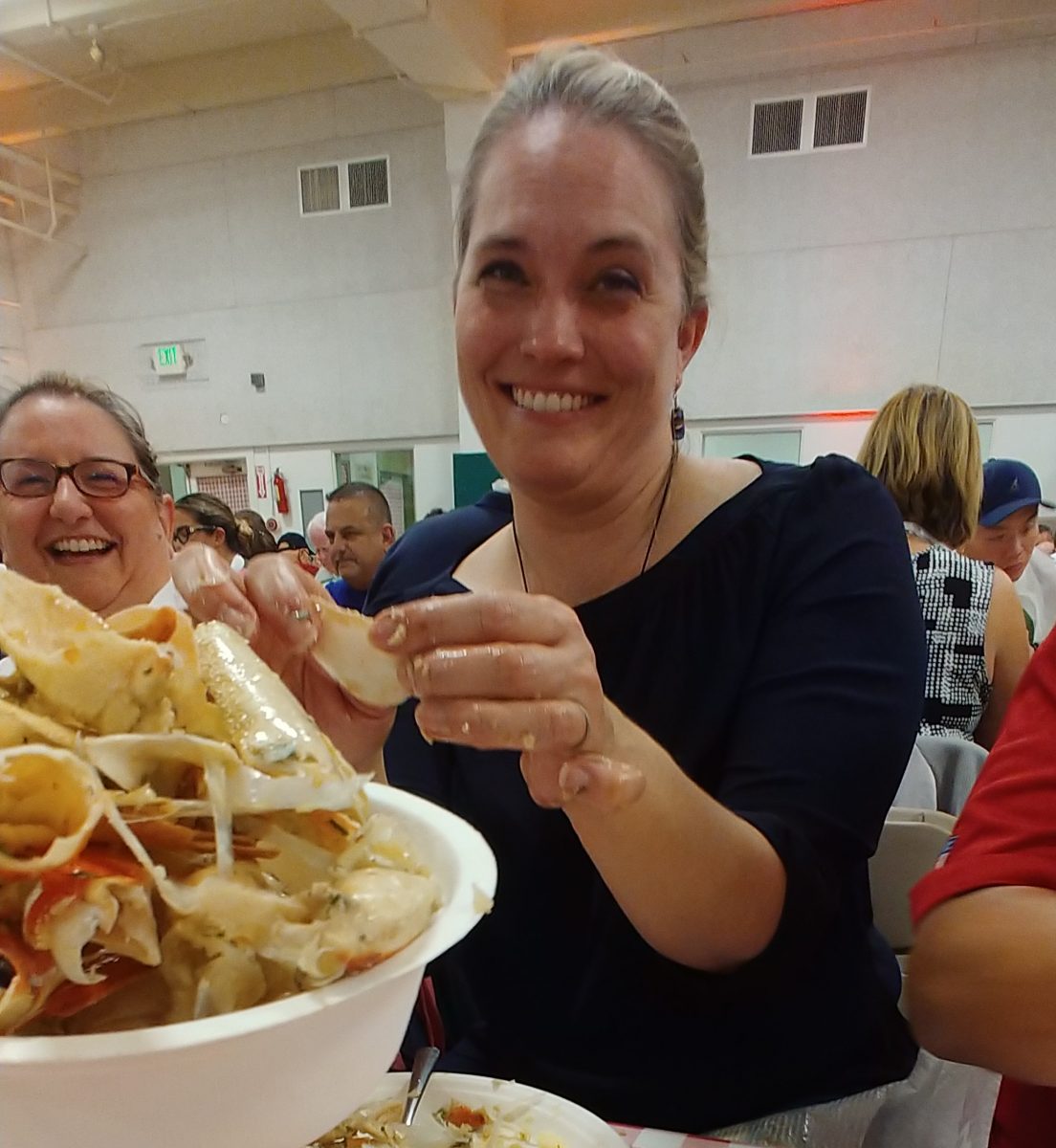 One last note: you may want to congratulate Rich and Laura the next time you see them at the restaurant: their young son Vito was married to his lovely bride Anne at Saint Anne’s of The Sunset Church on December 14th. From all accounts it was a beautiful wedding, and I couldn’t be happier for the two of them. Here’s wishing the new couple many years of wedded bliss! 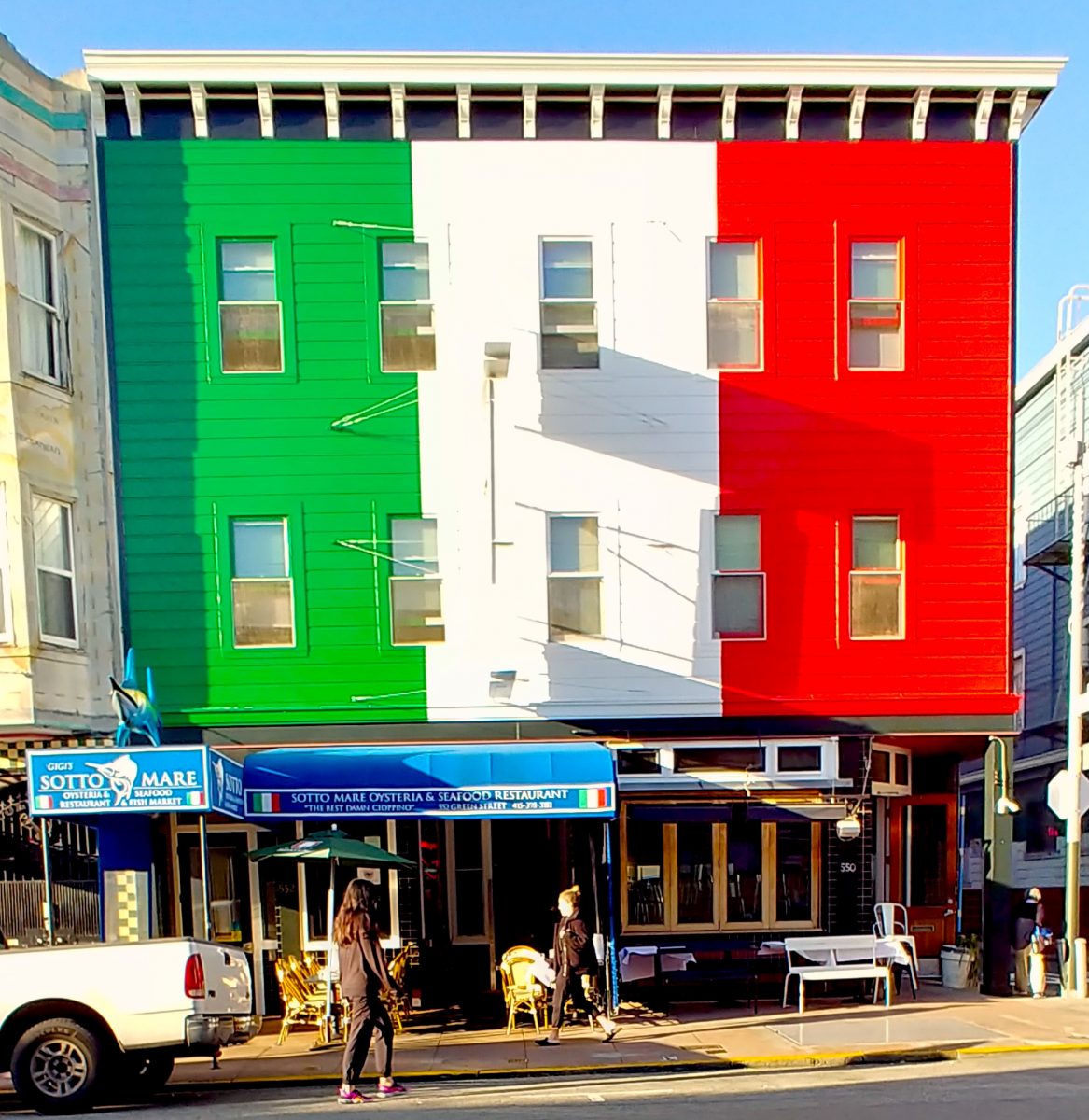 Meanwhile, take my advice and don’t forget to try the marinated crab. I’m very picky when it comes to shellfish, and it’s stupendous. Enjoy the February sunshine while we’ve got it, and mark your calendar early for next year’s crab feeds. For more info, you can also check out the Salesian Club’s event page. Have a Happy Valentine’s Day, everyone!