Here in North Beach, we see our fair share of celebrities, as one would expect: this is where everyone wants to be these days. But like most San Franciscans, here in the Beach we tend to play it cool in the presence of fame.

But there are stars, and there are stars. Last week, our very own Al’s Attire got a pretty unique visitor: Steve Kerr, head coach of our NBA Champion Golden State Warriors. 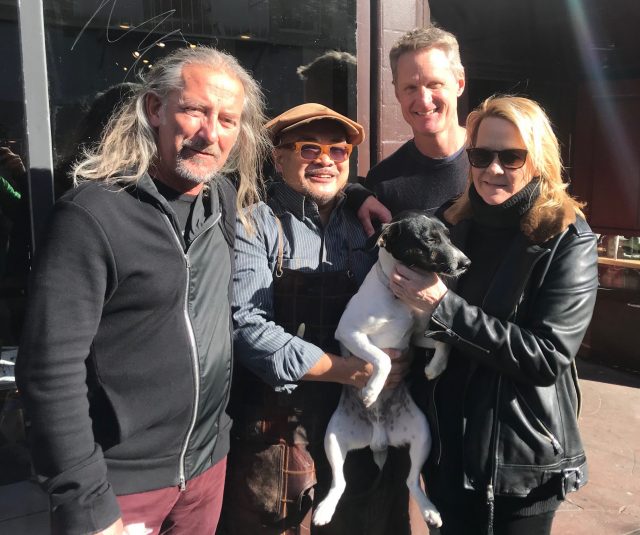 It seems the coach was just finishing lunch next door with his wife and daughter, and was standing on the sidewalk out front on Grant. Al stepped outside, followed by his dog Pepper. Kerr asked him: “Is that your dog?” The next thing you know Kerr was inside of Al’s shop, checking out the goods. But not before posing for a few pics out in front of the store with a couple of locals. Fortuitous!

Kerr’s wife Margot joined him, and the couple really appreciated Al’s selection of handmade things. And they didn’t leave empty-handed, either. After talking Al up about real estate (they are house-hunting in the Presidio, but Al made a case for Telegraph Hill), the coach got down to some serious shopping. 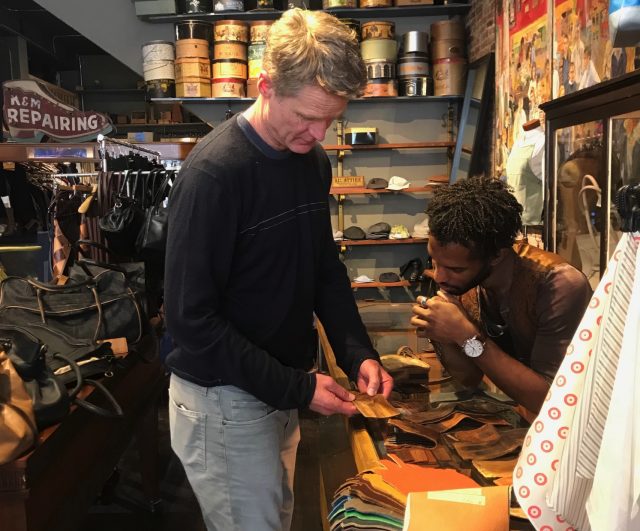 Apparently Kerr had just lost his wallet, and took a liking to Al’s unique line, crafted from repurposed Major League Baseball gloves. And when he saw the gym bag, also made from genuine MLB gloves, he had a brainstorm. “You know it’s Peter’s birthday,” the coach told his wife. “I bet he would love that.”

Turns out, Kerr was referring to his boss Peter Guber, Hollywood Producer and owner of the Warriors team. And apparently, also now the proud owner of a killer custom gym bag.

As he and his wife were saying their goodbyes, Kerr noticed an unusually large shoe mold on a counter. (Part of Al’s process for making custom shoes involves the creation of a mold based on detailed measurements of a customer’s foot.)

Not one to waste the moment, Al took his best shot. “Do you know anyone with big feet?”

Joe Content reports regularly on events in North Beach and the city at large, as well as anything else that happens to strike our fancy. Check back soon for more good content.