North Beach is a place of hidden delights, and like any proper temptress, reveals her wonders slowly. For 15 years now, Al’s Attire has been one of those charms: a custom clothier and leathermaker that is as idiosyncratic as it is classic, Al Ribaya’s Grant Avenue shop (literally) suits the neighborhood in every way.

Given its quiet corner, Al’s Attire is a very popular spot. That may have to do with Caffe Trieste, the city’s oldest espresso bar, which sits directly across the street. Now, it seems Al has found another fan base: the coaches and players of the NBA. And it only makes sense. Who needs a custom tailor more than a basketball star? 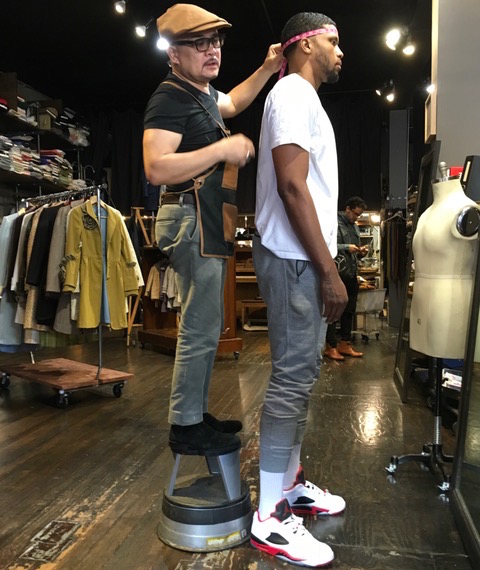 Al Ribaya breaks out his footstool to measure up the San Antonio Spurs’ Rudy Gay.

If you’re a regular visitor to the blog, you’ll recall that Golden State Warriors Head Coach Steve Kerr paid a visit to Al’s with his family back in March, where he picked up a wallet for himself, as well as a gift for Warriors’ owner Peter Guber. Last Monday, the Dubs were headed into Game 5 of their playoff series against the San Antonio Spurs when Al had an even more surprising visitor: Spurs small forward Rudy Gay. 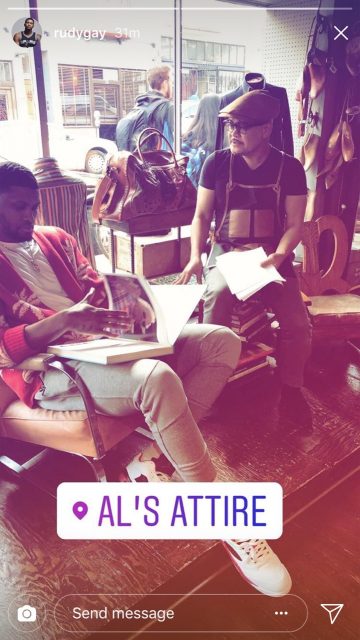 Those NBA fans among you know the Spurs were already down 3-1 at that point (Spoiler Alert*). And Gay was in the starting lineup for the game; conventional wisdom had the Warriors dispatching the Spurs that very night, ending their season to advance to round 2 of the playoffs. If I were Rudy Gay, I don’t know how I’d prepare, but shopping for some new duds seems as good a bet as any.

He took his time in the shop, and Al fitted him for the whole nine yards: hat, shirt, coat, pants–and of course, some very impressive shoes. Gay, it seems, wears a size 16. 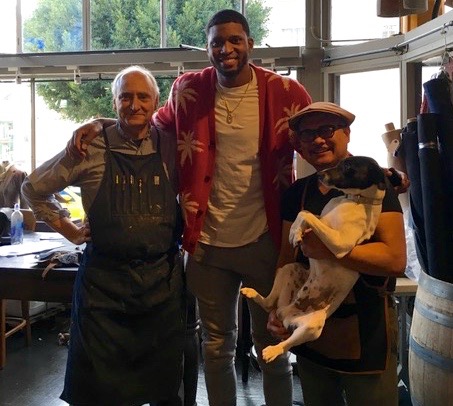 Renée, Rudy Gay, Al Ribaya and Pepper at Al’s Attire. Al encouraged Rudy to stand up for this one.

Now, in case you’ve never meant him, Al Ribaya is a basketball guy–and a diehard Warriors fan. And being a current NBA player (and a man standing 6’ 8”), it was inevitable that Rudy would be recognized.

And so he was. “Are you playing in the game tonight?” an excited customer asked Gay. Before he could answer, Al smiled and replied for him: “Yeah–he’s gonna be trying to guard K.D.”