Regular visitors to North Beach were recently greeted with a confusing sight at the popular Sotto Mare on Green Street. To the befuddlement of many, a matching blue awning has been erected over the entrance of the former Pasta Pop-Up directly next door—and their neighbor’s name has suddenly changed to California Fish Market.

When you stop to consider that Sotto Mare is itself a seafood restaurant with a fish market inside—one that‘s been at the location for thirteen years—this is a bold move, indeed. California Fish Market’s owners, Pete Fazio and Francesco Covucci, also operate North Beach’s Il Casaro and Barbara. And while their new restaurant obviously stands to benefit from the long lines at the perpetually thronged Sotto Mare, it strikes some as bad business. 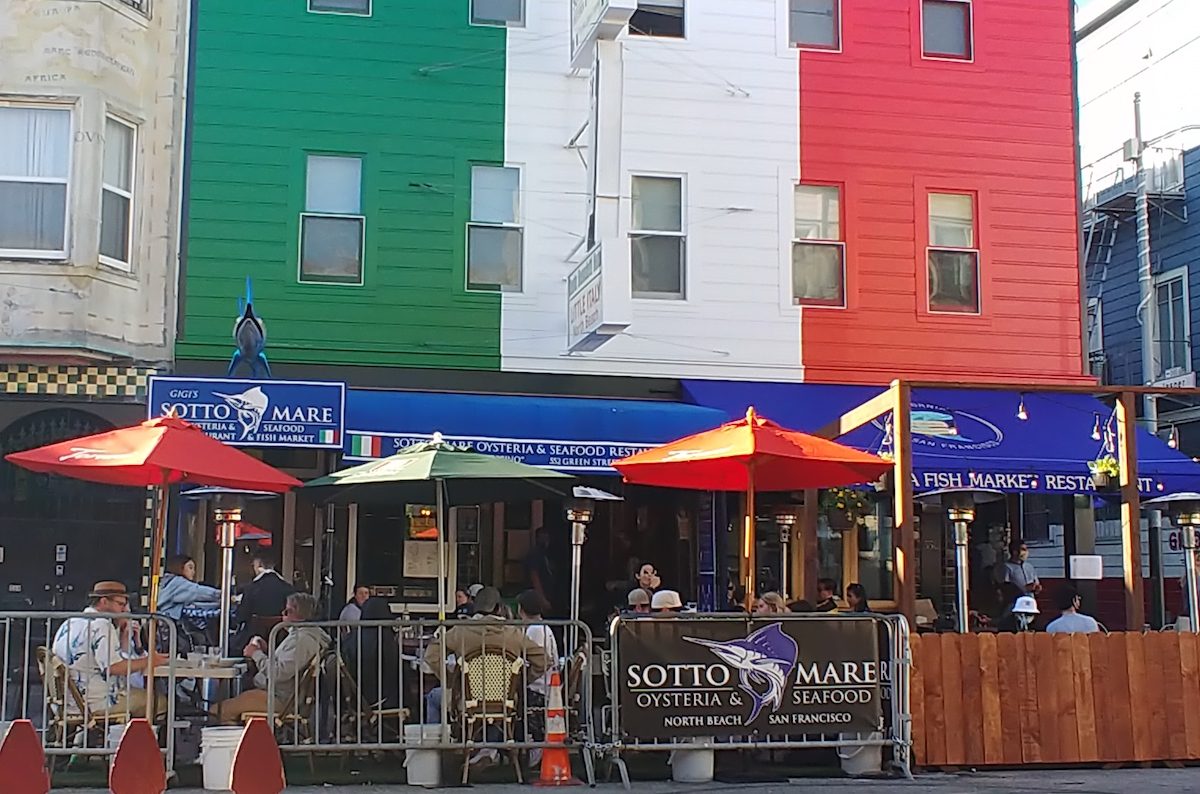 With the change over to outdoor dining, Sotto Mare has continued to draw crowds. | Photo: Joe Bonadio

In a neighborhood known for its tourist crowds, Sotto Mare has been a destination for well over a decade, and guidebooks, apps and websites all lead travelers reliably to their doorstep. And some say that by parking their seafood restaurant right next door–and installing an awning almost the exact same shade of blue–Fazio and Covucci will now be on the receiving end of much of that hard-earned publicity.

Of course, skeptics might point to the sheer number of Italian restaurants in North Beach as an example, and say let the best man win. But others aren’t so comfortable with the idea.

Al Ribaya of Al’s Attire, an anchor on Grant Avenue for over 20 years, saw the new signage the day after it went up.

“Right next door to an established business?” Al tells me. “That doesn’t seem right. That kind of thing might work in Fisherman’s Wharf,” he says. “But this is North Beach.”

With all the upheaval of the last few months, North Beach is somehow more beautiful than ever. | Photo: Joe Bonadio

Nick Floulis, late of Chubby Noodle and current owner of Hole In The Wall Coffee, also has reservations about the maneuver, but his are more pragmatic. “If you’re going to open something like that, right next door to Sotto Mare,” he says, “you’ve got some pretty big shoes to fill.”

When I spoke with the building’s owner, Giovanni Toracca, he claimed his hands were tied. “I spoke with both Rich [Azzolino, owner of Sotto Mare] and Francesco,” he says. “And there was nothing in the lease that prohibited it.”

“Me, I would have liked to see something different here,” Toracca continues. “Rather than the same thing right next door. But what can I do.”

Although his latest venture clearly has the neighborhood talking, Francesco Covucci struck an unrepentant tone. “I don’t think there is any confusion,” he says. “Everywhere in America, where there is McDonald’s, across the street is a Burger King.” 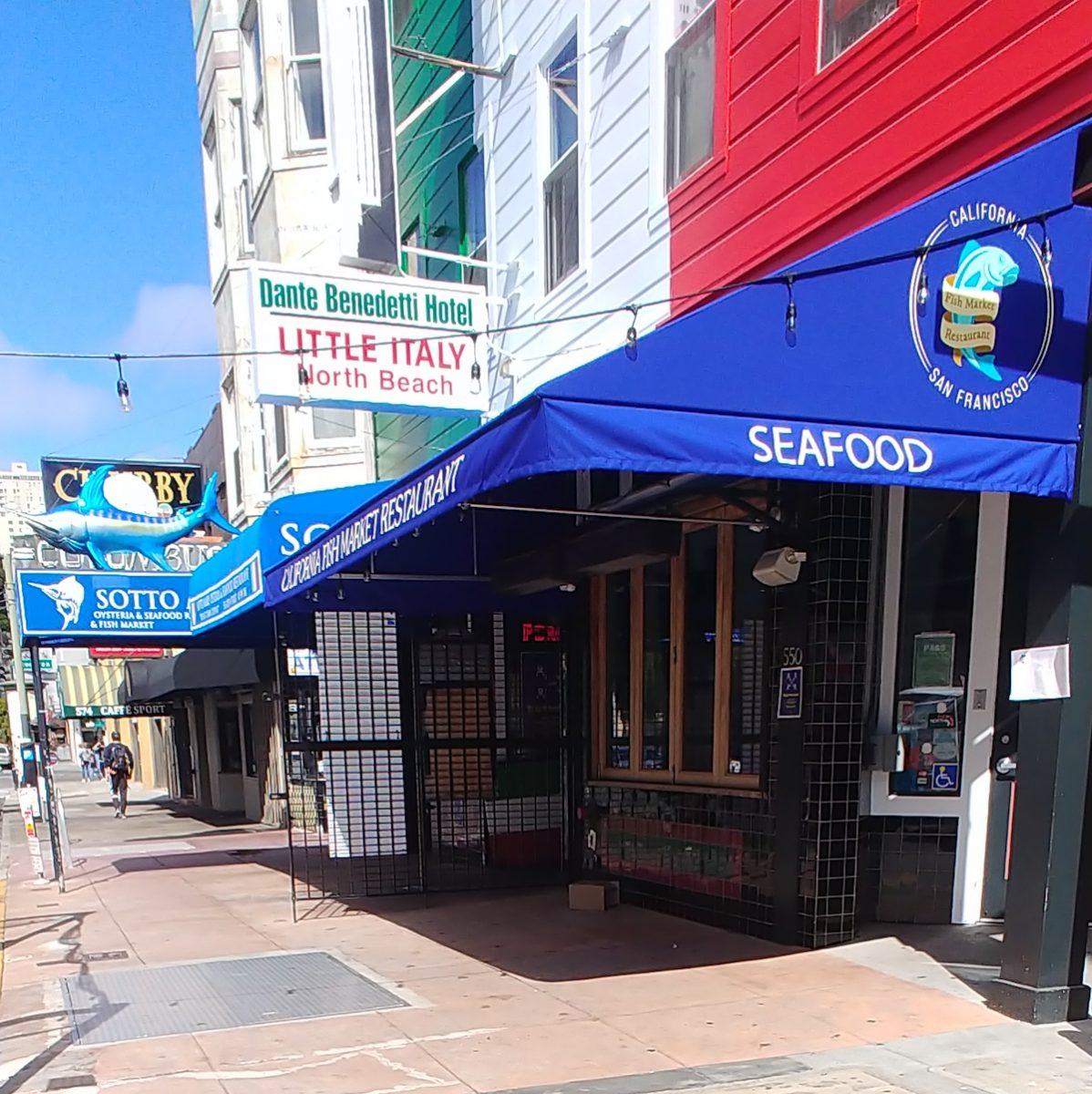 Covucci says that in the months since the lockdown began, he has noticed customers’ habits changing, and moving towards retail. And that, he claims, is what prompted the switch. “Things have changed a lot since March,” he says. “I have to diversify.

“This is business,” Covucci then adds candidly. “You know, I tried to sell the place to Rich. But he didn’t want to pay.”

When we spoke, Azzolino kept his counsel, and though he won’t rule out the possibility of other remedies, he has no comment on the conflict with his not-so-new neighbors. “I’ll change the subject, how about that?” he says diplomatically. “Brand-new on the menu, we’ve got Richie’s famous marinated cracked Dungeness crab.”

Sotto Mare has a few other additions coming to the lineup soon—including the “Sotto Mary,” Azzolino’s play on the Bloody Mary, served with a fresh seafood garnish.

“But you can order them both off-menu, starting today,” Azzolino tells me. “Now, that’s what I call news!”