In a town that traffics in food trends, one of the biggest stories of the past year has been the rise of Impossible Foods. Using a plant-based derivative called heme, the six-year-old Redwood City company has created a realistic ground beef substitute made entirely from plants. Along the way, they’ve garnered endorsements from some serious chefs: San Francisco’s Traci Des Jardins has been serving it at her elegant Jardinière for over a year now, and Chris Cosentino’s carne-centric Cockscomb has had it on their lunch menu since October. 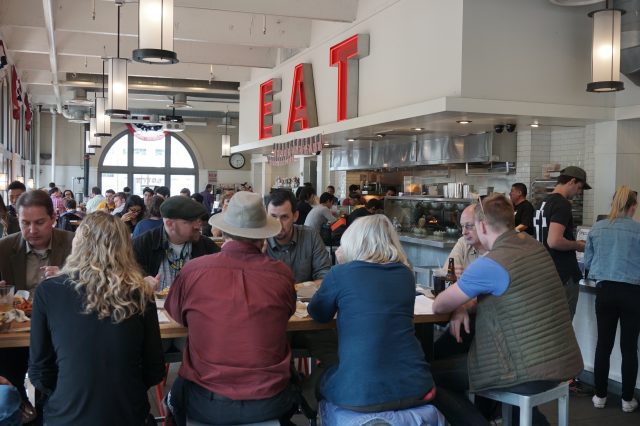 The dining room of Gott’s Roadside at the Ferry Building. | Photo: Joe Bonadio

I’ve been following these guys for a while, and the reviews I’ve read have generally been glowing. Notably, I’ve also seen reams of bewitching food porn depicting the I.F. burger in all its bloody glory. When I heard the company had enlisted the chefs at Gott’s Roadside, I knew it was time to try it. You see, the people who run Gott’s are hamburger people: burgers of one kind or other make up the bulk of their menu, and they all taste like they just came off the grill in your childhood backyard. So if Gott’s liked this burger, I was on board. 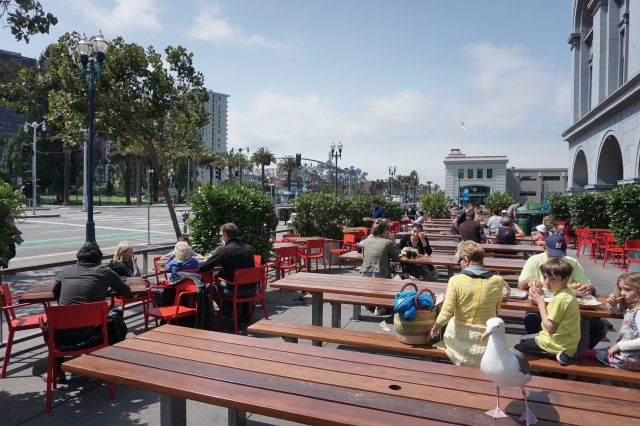 The patio at Gott’s, with a devoted regular in the foreground. | Photo: Joe Bonadio

Now, I just needed a partner for the taste test. I determined to find a chef. I immediately thought of my friend Juve Carrillo, owner of Panuchos and Los Mayas, two of the best taquerias in San Francisco. From cochinita to carne asada, Carrillo serves up a parade of delicious meats at his Yucatan-styled restaurants. Who better to judge?

We showed up to a late lunch crowd at around 2:00 on a sunny Monday, and got right down to business. “We’d like to try the Impossible Burger,” I told the cashier. Then I asked what I thought to be a very pertinent question. “Can I specify temperature?” If I was going to eat the Impossible Burger, I wanted the whole messy, bloody experience. 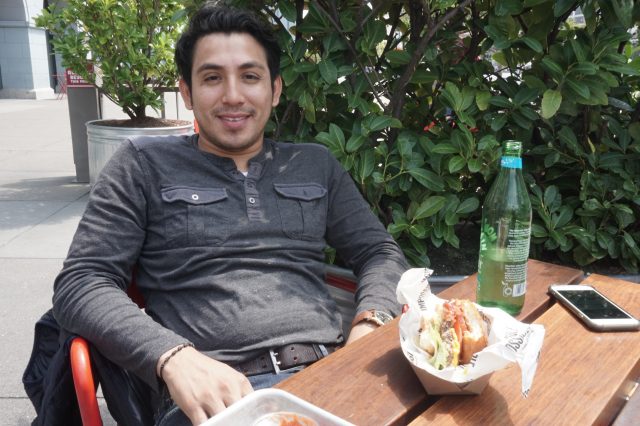 “No,” he told me. “The chefs have a certain temperature they recommend for it.” Okay, I thought. They’ve got this. We threw in an order of fries just because, and headed out to the patio to await our food.

The burgers arrived half-tucked into a tidy paper wrapper, and everything appeared to be as expected. We’d ordered them simply dressed in American cheese, lettuce, tomato and pickle, the most basic toppings available. So far, so good. But when I bit into my burger, I was surprised to find it almost well-done. “These are not rare burgers,” I said to my friend. “Yeah, it’s pretty much cooked through.” he replied. “Medium well.” Buzzkill. 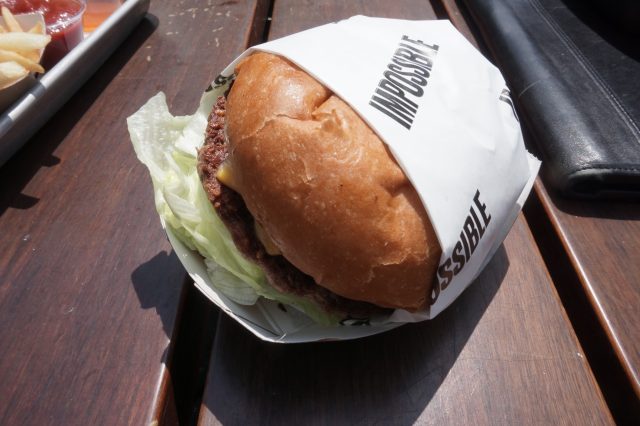 The irony is, the burgers were entirely delicious: we both agreed they tasted fresh, and that they seemed like real ground beef. We just couldn’t believe they were sold as rare or medium-rare. After all, that is the product’s tagline: “the veggie burger that bleeds.” 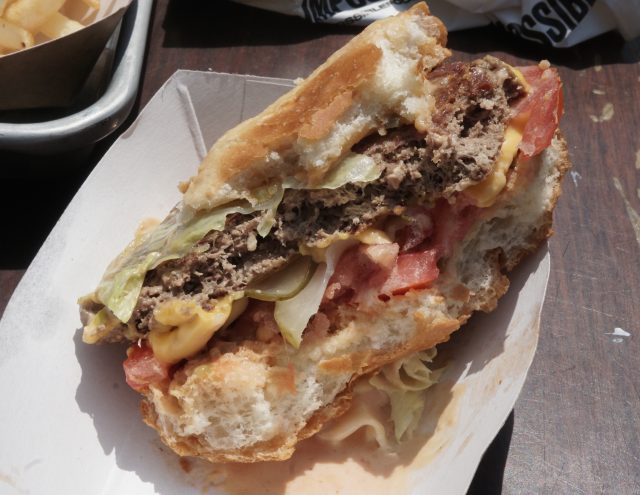 A bloodless affair: inside the bun of the Impossible Burger. | Photo: Joe Bonadio

All things considered, we enjoyed the burgers, and we were both impressed with their texture and flavor. And just as importantly, I fully support what these guys are trying to do: raising cows for beef is terrible for the environment, and let’s face it, we aren’t going to stop eating burgers anytime soon. Anyone who is making real progress in creating viable beef alternatives is worth getting behind.

Joe Content writes regularly about the Embarcadero, North Beach and the verdant garden that is San Francisco culture. Subscribe to our newsletter in the panel to the right, and make sure to come back to see us soon.