When it comes to the culture and history of North Beach, Caffe Trieste holds a unique position in our beloved neighborhood. For better than two generations, this little Italian caffe has served as a makeshift sanctuary and community center for the people living here–all of them. And more than any one establishment, Caffe Trieste still exemplifies the old-school style and family vibe of traditional North Beach. 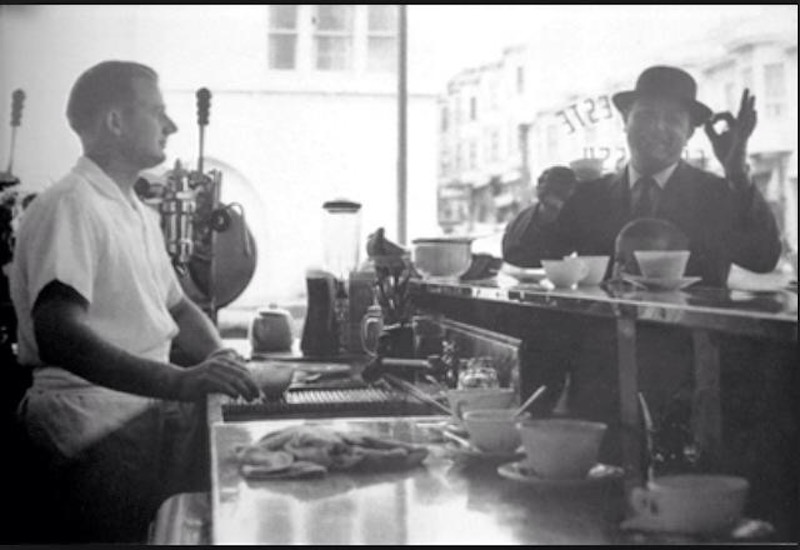 I had the honor of meeting Gianni Giotta, Caffe Trieste’s late founder, several times. Known to everyone as Papa Gianni, he was larger than life in this neighborhood, known as much for his singing prowess as his effusive friendliness. Sadly, Papa Gianni passed away in 2016, at the age of 96.

I’ve also known his granddaughter Ida Zoubi, the caffe’s co-owner, for many years. On the occasion of Caffe Trieste’s 63rd Anniversary, Ida was kind enough to sit with me for the below interview. 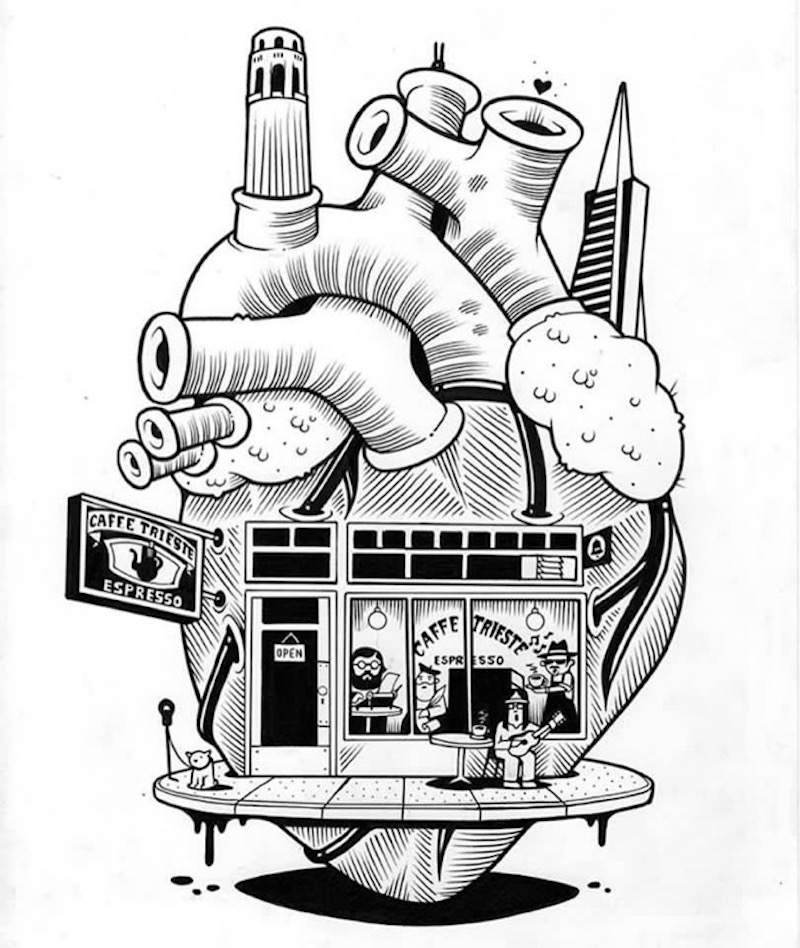 “The Heart of North Beach” created by Jeremy Fish in honor of Caffe Trieste.

JB: Tell me a little about him.

IZ: Well, he came from Italy with my grandmother, my mom and my uncle Gianfranco. It was after World War Two, and they came through Ellis Island, and worked their way over to the West Coast.

They ended up in San Francisco, and after being here a while my grandfather decided he wanted to open a coffee shop. He really loved this neighborhood, and he opened the place in 1956, when he was just 36 years old. That’s pretty young to start your own business, having just restarted in this country, and made the switch of cultures. 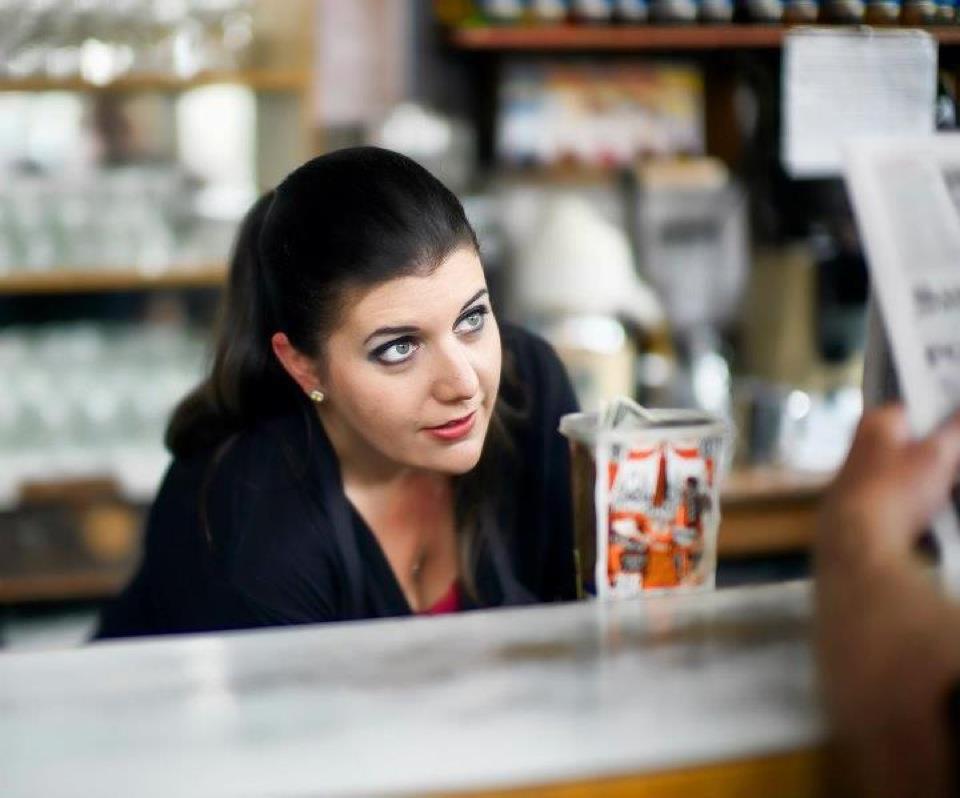 JB: What made him a success?

IZ: He welcomed everybody. I don’t know how it was in the very beginning, but in the Sixties there were all kinds of people around–writers, the Beatniks, you had hippies and businessmen, a big mixture of all kinds of people from everywhere. It’s still like that in some ways; it’s very laid back and family-oriented here.

JB: That’s one of the things that really drew me to this place a dozen years ago, that inclusiveness. What are some of your earliest memories of this place?

IZ: My mom would come to work here every Saturday for the concerts. She still does, though it’s once a month now instead of every week.* I would ride in with her and my Uncle Gianfranco in the car, and I’d be excited, because once I got here I could run around the neighborhood.

I was a little kid! And I kind of went anywhere I wanted. Then the music would start, and I’d be wandering around the cafe. When I was small I used to sing with my mom here. Then I retired, when I was like six…

IZ: I just didn’t want to do it anymore! Then around the age of nine or so, my Aunt Yolanda, my grandfather’s sister, put me behind the counter. She’d say ‘Oh, wash some dishes.’ ‘Oh bring me this.’ Cleaning up, what have you. Then she started showing me how to make coffee, maybe a year or two after that.

She basically broke me in. Every Saturday, I would come in and work, starting around Middle School, I think it was sixth or seventh grade.

It was fun! All the other kids were in the mall, and I was in North Beach, behind the counter in a coffee shop making espresso. 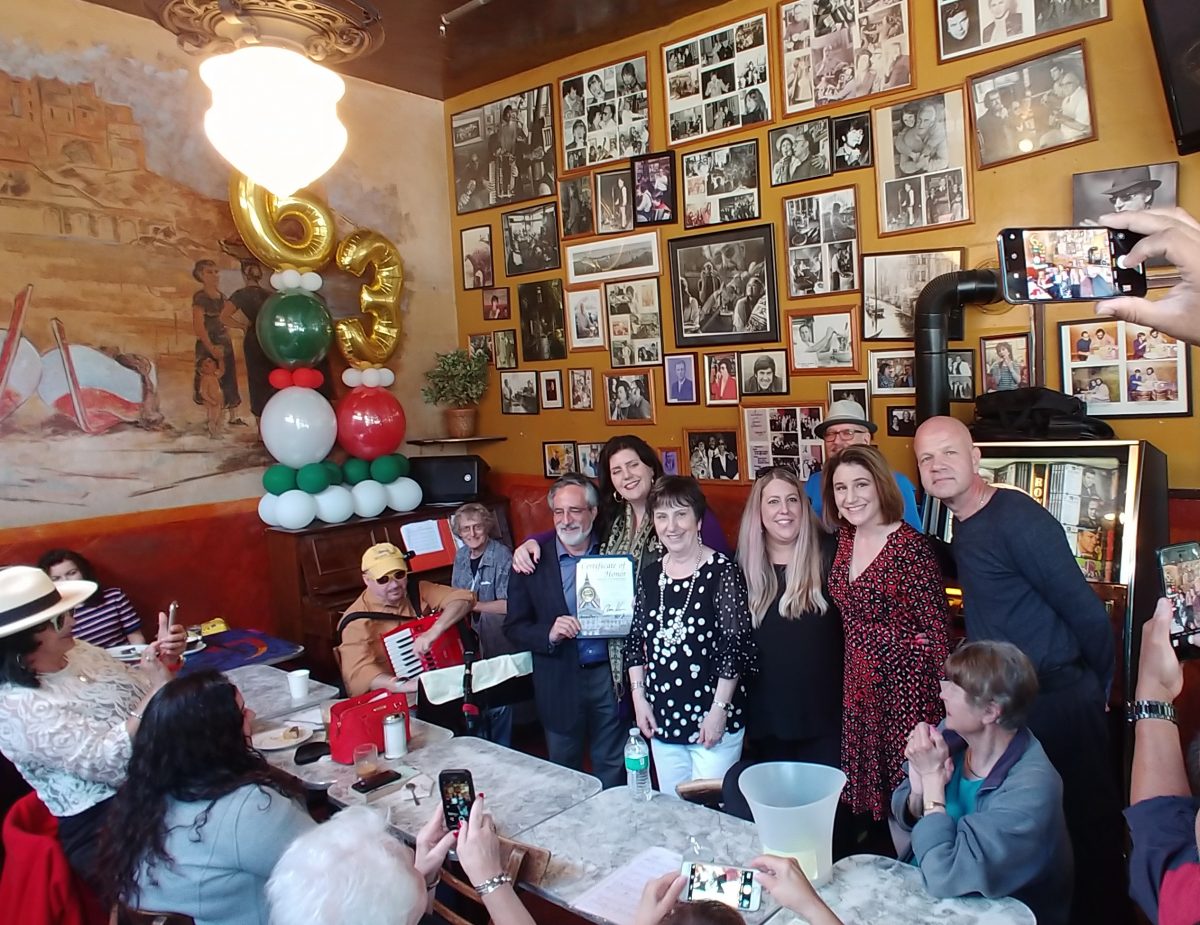 Ida Zoubi, her mother Sonia and the rest of the Caffe Trieste family accept a Certificate of Honor from Supervisor Aaron Peskin.

JB: You had already started your professional education!

IZ: It was very entertaining, for sure.

JB: So this is a big week. What are some of the things happening for the anniversary?

IZ: Well, there is an art piece installed in our window, a print of a drawing that Jeremy Fish did for the caffe about two years ago. I’m excited to finally be able to share that with everybody. It’s the size of the window, and we had shirts made. It’s a heart–basically the Heart of North Beach.

On Saturday morning, the celebration began. From 8:00 AM to 10:00 AM, the baristas were dispensing cappuccino and espresso for just 63¢. There were “Heart of North Beach” t-shirts and bags for sale (still available in the Trieste retail store). And at 1:00, things really got rolling, with live music from the Caffe Trieste Band and a poetry reading by Jack Hirschman, San Francisco’s former poet laureate. The house was packed with regulars, and the whole family seemed to be there.

On the regulars list was Aaron Peskin, who stopped by to present the caffe with a Certificate of Honor from the city recognizing its unique contribution to the social fabric of San Francisco. Peskin had singularly high praise for Caffe Trieste. “It’s just an extraordinarily beautiful thing,” he said. “It’s the artists, it’s the freaks, it’s the hippies, it’s the poets….there are no words that can say what a treasure Caffe Trieste and this family have been for the past 63 years.”

*The concerts now run on the last Saturday of every month.